Hi, this is my first post here. I made this addon, it is a simple script, and I am not sure if there already is some script with the same feature

(can you confirm it to me? Anyway, at least I learn how to make addons, it was my one).

So, this addon allows you to move the faces along individual normals. I missed something like that when I need to extrude faces. It is similar to Shrink/Fatten, but it’s not the same thing (Shrink/Fatten scales the faces, my script just translates).

I have attached an image to give a better example.

The script is available here: https://github.com/marciodrosa/FanPlugin (click “Download ZIP” and unzip the file, or use git clone if you are a git user)

Hope it can be usefull.

UPDATE: a new version is available for Blender 2.73. Now you can also move individual vertices or edges. Just select the “selection mode” on edit mode. 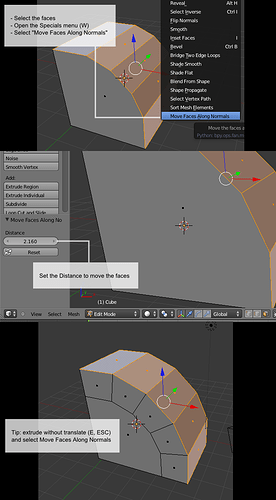 Hope it can be usefull.

All simple and versatile modeling tools ARE !

thanks for it Marcio !

It is very useful.
Thank you for the addon.

This works like a charm, good job and thank you!

This and other similar addons should be merged entirely in default Blender. (as long as “extrude along curve”, vertex chamfer addon…)

It seems to me we can use for the same result “Inset Face” function (shortcut “I”).
Just set Thickness=0 and slide Depth value.

@vklidu - It does, but if you don’t want to extrude and just moving, there’s no chance without addon.

Who knows if this can be “ported” over edges and vertices? Many times i should move along its singular z normal a loop of vertices, but it’s impossible if you have loops flowing in complex directions…i’ll be back with a screenshot shortly.

Right, Inset does extrusion, but you can easily select a loop (with Alt key) and disolve it.

Edit: Hm, Inset function “extruded” your example nicely too, but disolving in this case failed.
Hm, it’s a shame. Don’t know why.

Thank. You. Have been nagging about this in Blender since 2005, I think. This should be an option for the regular extrude, not another workaround with another tool, like inset.

Moving faces along normals without extruding is a very useful tool. Any change of doing another script for inset scale as well, that is inset scale algorithm but without creating extra geometry?

I’ll be also pleased if script become merged into blender, actually I never understand how user can work without (it doesn’t seem as something difficult to code.
I just tried to offer inset that is already part of blender, because it s going to be quite a lot of addons alternatively activated . . .

Glad you liked it. I admit that I had not noticed the workaround with the inset tool before, but I think it is more easy to use the Move Faces Along Normals than inset and dissolve. But I have a question: do you think the sensibility of the “Distance” control is annoying? I think it is… maybe I need to improve it.

vklidu, yeah, you are right, it is not something so difficult to code. That is why I was not sure if someone had already done it. And, of course, I will be happy if it becames part of Blender.

marcoG_ita and BrilliantApe, I agree with you, both suggestions (move edges and “scale inset” faces) are missing for me too. Maybe I will try some experiences for the next days. (Actually, I noticed that an error is displayed to the user when edges are selected… need to fix that.)

two years have passed since I create this script??? Time flies…

Anyway, a new version is available (same link of the first post), only for Blender 2.73. And I added two new features now (I wanted to do this since 2012!!): it also works for translate individual vertices and edges. You just need to select the appropriate “selection mode” (vertex, edge or face) on edit mode.

Hope it can still be useful. For me, it is.

Thx for the Updated!

Someone’s been reading my mind, this is awesome. It would be cool to see the operator not be dependant on a value slider though, it would be cool if the operator worked more like the Extrude tool in that you can move the mouse to adjust the extrusion instead.

I downloaded and installed this script, but when I went to use it I got this error message. I am running Blender 2.72

Anything I can do ?

Crocadillian, I want this too. I promisse it will be done until 2017!

Just kidding, I think it is easy to implement, I will take a look soon.