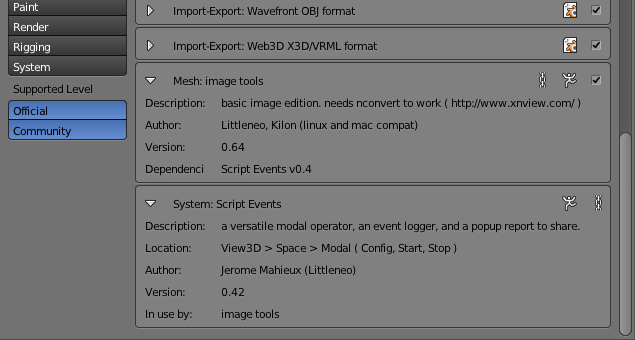 this is addon that installs/uninstalls a patch to help in blender addon development and add
a dependencies feature between addons.
it’s more intented to the blender pythonnist community and script developpers.
it removes common annoyances when scripting/enabling/bugging/disabling/reloading etc.

addons can optionnally be disobedient :

bugged addon enabled by default are not marked enabled any longer.

nerds friendly (some switches in init to play with)

the patch can be safely enabled and disabled from the user preferences addon tab.

a large README is provided with all of the info !

to link a parent and a child addon is simple. in the init file of the addon, one needs to ass a new field called dependencies

as of 0.6 this patch is (from now) provided as an addon 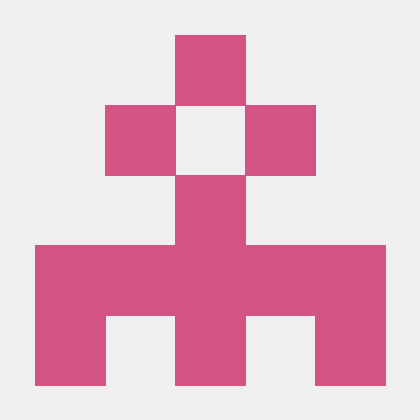 can be used with graphicall builds (see nerds swicthes in README) at your own risk.
( but it’s not too risky.)

if you used v0.6, you should update. simply replace the addons_dependencies folder,
restart, apply, and restart again.

for prior patches (provided as is with the .dependencies extension) you should restore the original files them remove the modded files, then enable the addon (not mandatory but cleaner)

WARNING : it has been tested x 100 on XP, ubuntu 11.10 2.59, 2.60rc and 2.60 in various chaotic cases. everything should be ok for seven and mac else please report. LOTS of info in the readme and documented code.
I’m often on irc #blenderpython for support. in the worst cases, the trunk files are provided and their paths are written in the config file.

So where is the problem ? Check that algorithm gives a solution and then enable the button. Even if the algorith is slow its not a problem cause from my experience the gui updates only the when the mouse hovers it or clicks on it.

You could probably make it intelligent so its does not check the same data more than one time with the algorithm.

updated to 2.5.8a
corrected some bugs
added dependencies icons

I updated a script that uses this dependencies mecanism :
http://jerome.le.chat.free.fr/index.php/en/download/blender/pgnreader-download.html
it needs another script to be run. the following line in the init file of the addon tells Blender to seek for the parent addon :

allows to work on a multifile module without having to restart Blender at every modification / bug of a sub module.
(this is only about a loop in sys.module, added to the addon disable function, that removes the child modules of the addon, so it can be executed at import time again when they are enabled again). shouldn’t hurt, afaik.

these modifications shouldn’t hurt, at least it works fine at home, but please let me know.

oh, also it should now work when the addons (parents, childs…) are enabled by default.

kilon, yes that sounds great but it can become really tricky for both the users and the devs. auto-updates, dependencies check, curl, version managers, woow…

so this mod will stay simple and won’t edit too much file (in fact just one really, the other is about the ui prefs). in fact this mod is essentially a visual trick + a watchdog when you attempt to disable an addon used by another one.

kilon, yes that sounds great but it can become really tricky for both the users and the devs. auto-updates, dependencies check, curl, version managers, woow…

so this mod will stay simple and won’t edit too much file (in fact just one really, the other is about the ui prefs). in fact this mod is essentially a visual trick + a watchdog when you attempt to disable an addon used by another one.

You are absolutely right, its quite alot of work. But no worries , I may implement this for a new project I am thinking of Gyes - Tartartus that will essentially send blender in the cloud and make it possible for the user to have access to all blender’s online resources (add ons included) from inside blender. But I will deal with it after finishing my Gyes - Random Material Generator , probably in 2012. Your add on, make my life easier though and unlike mine which is vaporware, its here , it works and its very easy to use.

Well done and thank you.

This addon (or little hack) is great, it saved me a lot of time and you should propose these two patches to be included in the next official release.

updated for 2.59 (+ some small updates)
http://jerome.le.chat.free.fr/index.php/en/download/blender/addon-dependencies-download.html

an addon can decide wether or not to enable or disable itself by returning False or any string message like ‘I must write a file before that’. message will be displayed in the console and in the report ui textfield. addon returns nothing or True if everything is ok.

for sure a script using the dependencies field and returning ‘blah’ / False remains compatible with normal files, it just won’t react.

hey thanks pa.basso. I tried first to make me understand by ideasman on irc but I failed in this task for now

update for 2.60rc, 3 files this time. I changed nothing but 2.60 code is more organized (addon panel operator code moved to a main module full of py operators)

for now it tests if a module is enabled, but it could be interesting to only test wether an addon is here, in case we only need to use the modules of it and not its ui or the whole stuff for example.

updated, now as an addon, heavily tested on XP for now.

there’s no significant changes about the way it works, it’s more like a kind of safe installer/desinstaller.
revision check
currently used files check
compatible with 2.59 and 2.60rc
safe
there’s a big readme inside you should read.

thanks for reporting any issue

I would need a little help :

I think a file checksum check would be more reliable to identify the running files. the actual published version can recognize a modded file, as files are ‘tagged’ with a version number line 20, but it can’t recognize if the current used files are the orignal or not. it only assumes they are the original if they are not the modded ones, and stores them in a folder (/user) of the addon after applying the patch. then you can restore from /user, or from the /ori folder that provides the original files. (bundled in the addon)

right there’s no limitations with that but a CRC test is more accurate. I begun to edit the addon and it looks ok on win XP 32bits but I would need that linux, mac, and 64 bits people run a little tests to be sure that the CRC test returns the same ID for each file. it should but you know, I don’t want my addon to remove your file by mistake because of that. (README or blender project)

so thank you if you a 5 min left for this, ( this is for a fair cause) :
https://github.com/littleneo/Blender-addon-dependencies/blob/master/crc_test.zip?raw=true

unzip anywhere,
simply open the test_me_please.py file in a blender text block
run it (altP) only once nothing is done or written, except that
it creates a new text clock called CRC

it’s nice if you can share the text of it at paste.all or post it here, many thanks for your feedbacks !

updated for 2.60
no feature changes in the patch, only ‘patcher’ modifications.

updated for 2.60a
no feature changes in the patch, only ‘patcher’ modifications.