Thanks a lot ! Maybe now somebody would implement also ridiculously simple addon for measuring distance from vertex to vertex AND/OR
OSNAP modes like: http://www.pasteall.org/pic/70754

This is a neat little addon. Seems like it may be useful as well. Thanks for script!

You have it already but you need to activate it :http://wiki.blender.org/index.php/Extensions:2.6/Py/Scripts/3D_interaction/Panel_Measure 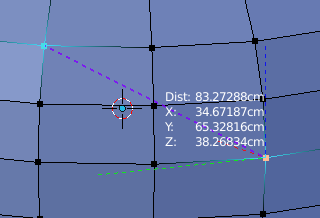 You have it already but you need to activate it :http://wiki.blender.org/index.php/Extensions:2.6/Py/Scripts/3D_interaction/Panel_Measure

Thanx for help, saved it from browser (html block inside file) and could not activate from within Blender.
Kinda awkward but working.

I meant already = you have it without downloading.
All under “release” title are included in Blender:
http://wiki.blender.org/index.php/Extensions:2.6/Py/Scripts

Really nice addon. I only would add a way to graphically know which is the start and end vertice…

I meant already = you have it without downloading.
All under “release” title are included in Blender:
http://wiki.blender.org/index.php/Extensions:2.6/Py/Scripts

Strange, could not activate at first.

I think that this addon is useful.
Thank you!

good job,this is a handy addon

So, what Version(s) of Blender is this compatible with?
Tried to run in 2.68, didn’t seem to work.

Thanks. great for architecture modelling

Inspired by Yang work I developed https://developer.blender.org/T43586?workflow=createhttps://github.com/peppelinux/blender_addons/blob/master/mesh_edges_length.pyI dropped the angle feature but I hope to increase the edge user experience.It also support Scene unit measure as meters or imperial and some behaviour as explained in its description.I hope that this toy is to your liking as it was for me during its development, I’m also curious of your feedbacks.

usefull but not quite.

the way to input precise numbers can’t be compared to solidworks also the ease of use of the parametric dimensions from solidworks can’t be beaten.

besides it’s still easier in blender to input precise numbers just by enabling show edge length then manually snaping the vertex you are trying to change to the other vertex of the edge between them then just use the grab comand and input the exact size of the edge you want.

In fact it would be even nicer if it could change a bunch of selected edges, not only the active one.

In fact it would be even nicer if it could change a bunch of selected edges, not only the active one.

You can, just select edges.

for me it also only works with the active edge and not multiple … can someone tell me how to make it work on a selection of multiple edges?