i have made a simple addon again, which allows you to quickly open source files of addons with a single or with multiple files with a click of a button directly from the Addons page under User Preferences.

Just install and activate the addon as usual and you can also set optionally an external text editor as preference. If you leave it blank, the source files will be opened in blenders scripting view.

After enabling the addon you should see following: 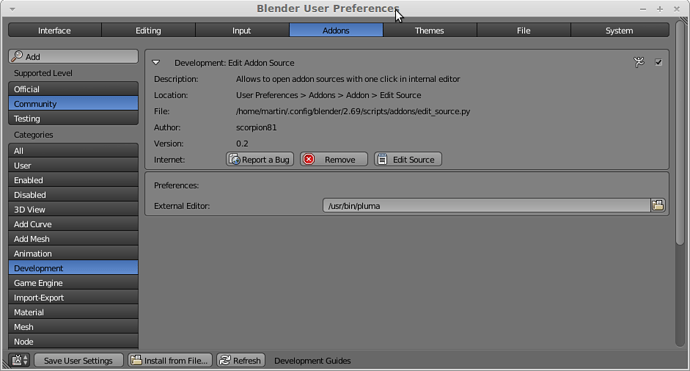 This “Edit Source” button will be added to all addons automatically and will open the sources of this particular addon when clicked.

Edit: slight update by adding a “Use External Editor” checkbox,
so you dont always have to clear out the editor path if you want to use the internal editor in the mean time.

Excellent addon. Very useful for frequent py coders that work with other addons or want to quickly find and edit their addon code from inside Blender .
I will give more feedback when I have time to use it more.

Thank you, I can’t wait to just see what I can learn using this addon about how other addons work

Small question … I am using Emacs as external editor, it opens indeed nicely BUT not with the intended file.
The source link looks like C:\emacs-24.2\bin\runemacs.exe

Have I to add something ‘extra’ ? some parameter like %f or so?

Thanks for this addon
Peter

Just installed emacs under windows and tested, should work fine with just the path to the exe. If the addon consists of multiple (py) files, they all will be opened in different emacs buffers.

it doesn.t … but maybe the reason is that I force the rember file to open up at starttime

…
But am very happy with notpad++

Thanks for trying and answering

Thanks, it proved very useful quite recently!