I recently did a project and used the io_import_images_as_planes.py script to import a lot of assets. Most of my assets were silhouettes so I had to do a lot of fixup on the materials after import to get everything the way I wanted it.

I consolidated all that fixup into a checkbox in this new version of the import script. So if you know you are importing silhouettes turn on the checkbox and it will do a few extra tasks to each material. Like turn on transparent shadow reception, turn off color mapping, add balanced emit/ambient values to the material and turn off specular highlights.

I also fixed a crash that occurs if you import images with Mac OSX hidden files on a Windows PC. The code now examines the width and height of each image. If the values are greater than zero the code allows processing, otherwise it skips that non-image found file on folder input.

A new feature I added is called Limit Display. In After Effects when you add an image to your composition it will only exist across a certain frame range. When this checkbox is active, each image in the folder will only exist for the duration amount in the scene. The code automatically animates the hide_render attribute of the imported image plane. So the first image will exist from frame #0-90, the second from frame 91-180 etc… This makes the Dope Sheet look like the After Effects layer window.

Another fix is I changed the default for Use image dimensions to be on instead of off. I always want my imported image to be the size of the image I am loading.

I know it is just utility work improvements but I thought I would offer it up to the community if someone else needs it.:rolleyes: 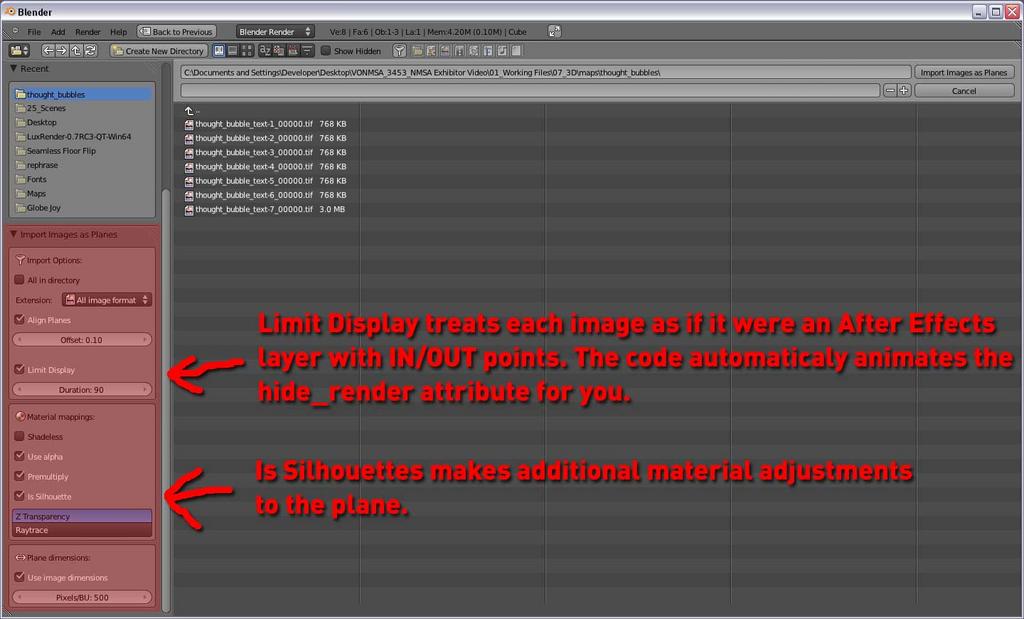 Hey Atom - thanks for this - its one of my most-used scripts. Tho i’m unsure how to install this update, as i cant see a link to an updated .py file…? (unless i’m being daft!). Do i have to copy and paste something from the .blend?

Thanks Atom, this is a nice modification and your tutorial shows a lot of handy techniques. Note if you want to align the thought balloons perfectly with the camera you could select the plane then shift-numpad 1/3/7, whichever is appropriate, followed by ctrl-alt-0. This used to be the * key function in previous versions.

*We need more tutorials with the singing!

thanks Atom, we will be adding your patches to the script in trunk this weekend