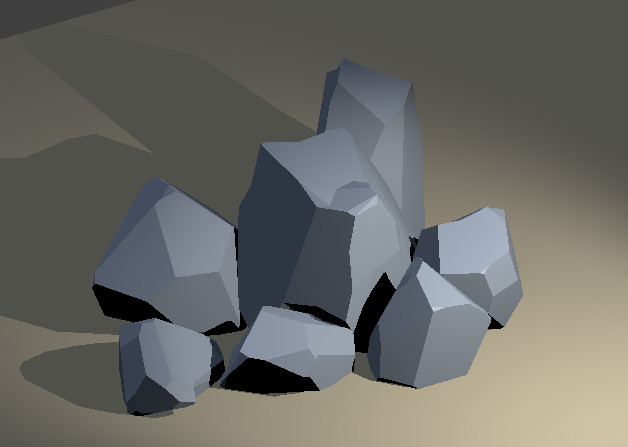 Number:
Number of rocks to create.

Midlevel:
Displacement mid level.
When you set one of Size Ratio too low, you would get weird rock shapes.
Setting this parameter lower might solve the problem.

Random Settings:
You can set Size Range and Size Ratio Range as well as Random Seed.
Size of auto generated rocks varies between these ranges.

Keep Modifiers:
Don’t remove modifiers.
With this option on, you can see what this addon does behind the scene.

I like it. Cannot wait to try it out

And here I was making all these rocks manually :P. Great addon! Thanks!

You know it would be really great if you could add the option of auto-generating several different types, the user could select how many and the detail level, for example. These could then be used to “fill” scenes with Rubble or particles. Even if they had a sort of seed value to give slight variations with no user input, unless of course you wanted it.

version 0.1.9: added auto-generation. changed some ui.
Sorry to be late.

Great addon, thanks a lot!

Love the script. it is great for when you are just testing out ideas and need something to populate a scene.

Ok I just tested this out with 2.74 it works fine for generating one rock. My question is where are the options. I looked in the toolshelf and in the N-key pop out but I cannot find anything related to it.

Awesome addon. Love it. Thank you very much for sharing this.

Has anyone tested this with 2.78c. I have used it with 2.79 and it works just fine. But when I used it with 2.78c I get on rock in the 3d Viewport but I cannot for the life of me find the settings panel in the toolbar. This might be my fault since I have used the change categories script to consolidate a lot of toolbar panels and get fewer tabs so that they all fit into one window. But let me know if anyone else has the problem.

I know it is on the toolbar but what tab IN the tool bar???

Never mind I found it. After setting the change category plugin to get less tabs in my blender editor window certain plugins diappeared but I just switched to a different scene layout and the interface for this plugin reappeared