Here’s another script that i use in my every day tasks. It was the first one i wrote after the discovery of macro routines (many thanks to lukas-t and CoDEmanX). I called it anchor-translate. Basicaly, it is the ordinary G function with a little more disciplined approach. It introduces a ‘fixed point’ snap mode, often seen in CAD-style applications.
Very useful in moving objects while in perspective view. The precise desired location to wich selection should be moved is accomplished by the use of dedicated 3D snapping, without the need to adjust your transformation later in ortho views or through additional tweaking. In short, the point that you designate will be the only snapping hook during translation. I assigned it to the M key (enabled by Layer manager addon). 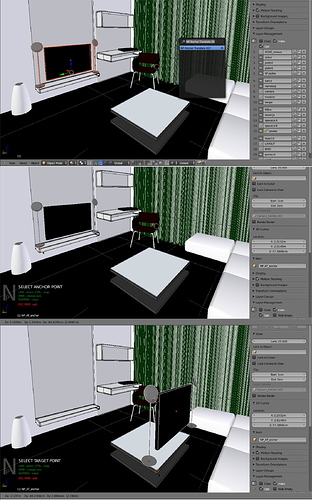 If someone decides to try it out, please report any problems. The description of the operator, together with the installation tips is included with the .py file (Notepad++/Win, Kate/Linux)

Cool, can be useful in some cases

Why don’t you give it a standard Shortcut that is not used yet ?
I think M is not realy useful to be set for a new Script

Sounds v.usefull, would you assign some other than M key though…?

Thanks for your feedback guys, it was while ago, i almost forgot this thread

I mentioned somewhere that my goal was standardization for a faster workflow. M key is the typical shortcut for move commands in graphics. For me, the M key was made available by the fact i use the Layer management add-on by Anfeo on regular basis, so Move To Layer command was no longer needed

Also, i wanted to have the standard G-function available just in case.
Actually, the key is not assigned through the script, you assign it after the installation by yourself. You can assign whatever shortcut you prefer

Wow, thank you!
I will try that one!)

I love it !! I was using a custom simple script to change pivot point and than manually drag and snap to the target. This is really perfect for me! Thanks.

Gorgeous addon! Thank you so much for this!
I guess, you can collect all NP addons in one tread to make a post in Blendernation.

Oh, by the way, may be some 3point alignation, or 3point Zaxis rotation?
We made some, but it is kind a bit complex and requires edit mode)

You’re welcome 1D_Inc, glad you like it. Yes, as a matter of fact, the NP bundle including an alignment operator is currently being worked on, should be ready soon.