All I am saying is subscriptions run counter to the philosophy behind Blender and, therefore, presumably the bulk of its users. But what do I know? To each her/his own.

All you’re doing is funding his pipe obsession, bringing us all closer to the day when the Nightmare Men come.

Nice ! Do they get to sponsor a specific project, or is it up to our awesome BDFL to decide ?

According to the Corporate Membership Prospectus what they get is:

Explain that as you will

Depending on your perspective this means they get complete control or they get to express which projects they really, really like.

Even if we could (we don’t) we don’t intend to steer or control anything about Blender. A lot of folks internally at Adobe and Substance 3D rely on Blender on a daily basis and as we were developing our Substance plugin for Blender, it felt like the right thing to do. We’ve recently also donated to smaller open source projects and libraries we’ve been relying on in some of our apps.
Not everything is a corporate 4D chess game

If we really want to be completely honest about this, then paying for software technically runs counter to the philosophy.

Personally I used to be opposed to subscriptions but I have since come around, at least for some things. Software development is moving at an incredibly quick pace and I’m not sure paying a high price for permanent ownership makes a whole lot of sense in 2021. Take render engines for instance, why would you want to spend a lot of money to own Arnold or Redshift permanently when there’s a pretty good chance that in a couple of years something completely different will come along that you’d rather use? I’d rather pay Octane $20/month and use it when I need to rather than be spending $700 for permanent ownership…that makes no sense to me.

What I suspect many people like yourself are opposed to are high monthly fees for said subscriptions. If Adobe charged, say $10/month for their entire suite, I don’t think anyone would be particularly upset about it.

The problem is of course overreaching corporate greed, which is truly what the open-source movement is against. So let’s call a spade a spade and just say that it’s not the subscriptions that make Adobe an asshole – it’s their expensive cost (at least for many indie and hobbyist users).

That is crazy cool!

I also just bought this:

Create, improve and bake your materials. It’s not a material library but a tool suite to design your own. A complete workflow which will be useful to you daily. Procedural, infinite materials that are easy to learn with the included starter course.

I am starting to see the fruits of my decision to invest (time, energy and money) in Blender so many years ago when everyone was more or less laughing it off.

And then… I wonder who the joke is on now?.. as they say.

Not really. There are good subscriptions out there (which I happily pay for). Adobe’s is not one of them (irrespective of the cost). Here’s why: once you decide to stop paying Adobe, you can no longer access the work you produced with it. They not only own the software; they hold your work hostage as well. If I rent a machine to dig a well, I don’t lose access to the well water when I return the machine. But Adobe would have you pay every time you want a drink of water.

Yes, Adobe is greedy, but the rental cost is only one factor.

I think a lot of folks are questioning this because Adobe has semi-competing tools. It could just be that Adobe would like to tap into the Blender user base (maybe some will buy Substance products it they work well with Blender), or it could be that Adobe wants the BF to develop tools that work with their products so that they don’t have to - why re-invent the wheel when you can get someone else to do it for you?
I doubt that there is anything nefarious going on, but remember that Adobe is a publicly-traded company and they don’t do anything unless it benefits their shareholders.
Also keep in mind that Epic has invested in Blender, and has competing products that are free, and while Quixel Mixer isn’t quite on the level of Substance Painter, Adobe doesn’t want folks cancelling their subscriptions.

I’d like one of the tinfoil hat brigade to explain how Blender will be simultaneously taken over by Epic, AMD, Nvidia, Unity, Facebook, Amazon, Intel, Ubisoft, Google and Adobe.

It’s a good thing. Free money for for Blender Development that everyone benefits from.

That made me laugh

It’s a good thing. Free money for for Blender Development that everyone benefits from.

Maybe, maybe not. If Blender get money, they hire more developers. Which is good. But if Blender get depended on that big company founds the companies get more influence. So what if they say: “No, we don’t want that feature in blender, it digs in our market, stop it or we would not fund you any more.”
So stop the feature and keep the fund and pay the developers so they can feed their families or toss the feature and keep the fund.

Can you point to a specific example of where this has happened or might have happened before? I’ll wait.

If this was how the Blender Development Fund worked then the whole thing would have ground to a halt. You have so many corporate contributors that are in direct competition to one another that if that kind of influence were happening behind the scenes nothing would get done. Nvidia doesn’t get to say “Make AMD stuff not work in Blender”. They get to help make Nvidia stuff work better in Blender.

Sure Industry support is welcomed ,but I personally thought it might come more from actual Studios not these big tech companies.

Big tech companies have more money, especially since big studios usually still have established pipelines based on Maya or other traditionally industry standard software. Newer scrappy little studios most likely to adopt Blender because it’s affordable probably can’t afford to be gold members, not until they grow to be bigger players at least.

I don’t know, to me it looks less like Blender is selling out, than big tech is buying in, regardless of whether they actually care about FOSS or just see supporting it as good PR. While I doubt they’re motivated by generosity I don’t see them as a threat - they’re investing in their own future as much as Blender’s. Blender is getting more users including people who haven’t done 3D before, and many of those users will eventually add Substance to their pipeline.

As Blender becomes more widely adopted in industry, we’re going to see more industry support (which will in turn feed more industry adoption). This is good for Blender users and development. This doesn’t mean Blender is for sale or controlled by big tech, it means you’ll be able to put Blender on a resume and get work.

How funny, a few days ago I was browsing the substance3d website (go figure why) and I was like hey that’s Blender they are using for their examples, let’s see what they are saying about it…wait what nothing ? not a single mention of the tool’s name in the entire blog post…I tough that’s so uncool from such big company. 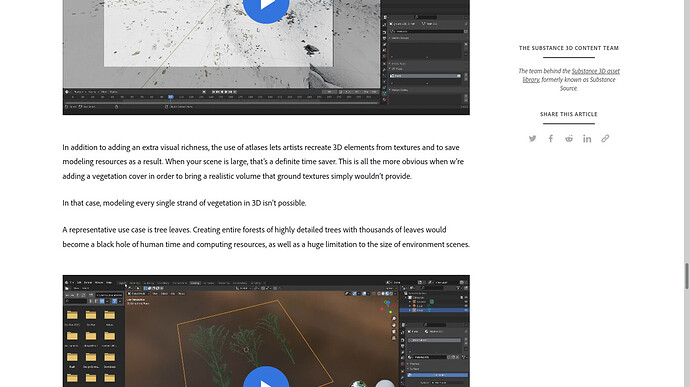 Get all the details right with this large collection of assets collected from all around the world.

I guess they “corrected” it now with the dev fund, seems like what happened with the last substance features video showcases taught them a lessen.

Any of the big companies would have to be stupid to take over Blender. As popular as Blender is, they’ll make half the world sue them!

Related, we just released our Substance and Mixamo add-ons for Blender in open beta:

The Substance 3D add-on for Blender is Here! (adobe.com)

I’d like one of the tinfoil hat brigade to explain how Blender will be simultaneously taken over by Epic, AMD, Nvidia, Unity, Facebook, Amazon, Intel, Ubisoft, Google and Adobe.

I normally am a part of the tinfoil hat brigade when it comes to distrusting corporations, but it seems mind boggling to me that people can’t figure out that the grand conspiracy here is as a simple as “Blender users are a growing market, appeal to them to increase Substance subscriptions.”

And more Blender users == more Substance subscriptions, so it’s a sensible investment. (Some will use Quixel Mixer or Armor Paint instead, some may do texturing inside Blender, but there’s no denying that many Blender users use Substance, or can eventually be convinced to buy Substance). Like @Jerc said, not everything is a corporate 4D chess game.

The fault for that lies squarely with AMD. Nothing to do with Blender nor Nvidia.