Just thought you guys might want to see this. It is a small project that I’ve done over the weekend, it isn’t really a game but more a test with blender’s game engine with more advanced movement implementations and so on.

My main aim here was to see how far I could go without using too much python. The only parts in this test was the mouse aiming, the rest was all done with animations, scene overlays and most of all, logic bricks. It still has a lot of bugs but for the majority of it I’m happy to see of what can be roughly done without python’s support.

i’m very impressed of your game!
Keep working on it you could make a big one out of it!!

Your test looks really great.
But maybe you should add some head movement while running.

The head is to still while walking, it should shake more. The sound is okay for now, but I can imagine that it would drive me insane after playing 10 minutes. The helmet takes up to much of the screen, it should be just a little bit less (I do like that helmet, it gives orientation).

Other then that^: Great work!

great setup,
gameplay wise I suggest you to make the landing sequence much shorter. Also the helmet view seems to be a little too claustrophobic

player sees too much of the helmet. It would feel much more comfortable if you allow the player to see more outside the helmet.
good work so far!

Thanks for the feedback guys, well I’m not really planning on making this a game, I’ve learned quite a bit in regards to the more technical side of triggers, arrays and so on.

That was all I had at my current disposal so yeah, I also think that it might get really annoying after 5 minutes or so.

Learning how to get the sounds to play at the right time was quite a bit of a hassle, though I got it working thanks a bit of help here on the forums.

The landing was supposed to be only for when the player does a power jump from quite a high distance, however the arrays and collision play it for the majority of the time, which is bad. Lol I did have a camera bob originally, but I removed it due to some complications with camera orientation and the python script for mouselook.

In all, this was quite a test for me, though it did start out as just a fun thing, and well eventually developed to what you saw there. The reason I mostly did this was because I’m a complete n00b when it comes down to any sort of coding/programming;), and being able to make all of that with minimum code, is better than for me to try and learn python or any other scripting language in my current circumstances. Haha

Regarding the mask and all, that was quite a worry to me as well, wasn’t quite sure how I could make the visibility perfect and keeping the feeling of actually being in the suit, however the mask I’ve used for the camera isn’t quite the real mask I made for the original character design. (Character was made for Hellgate Revival when I was still working for them, but the model got shot down.) Doing all of this myself was quite tiresome, but worth it.

intresting, the quality is nice, congratulations. keep it up!

Other than what they said. The foot step sound plays a little faster than the animation. You could slow it down in a bit in the pitch setting of the sound actuator. But the graphics look good. I know it’s just a test, but you might as well keep working on it.

Thanks, at the moment I am kinda working on it. Though I’ve got a little problem with the character aiming the weapon. Getting the character’s arm to move where the camera is looking turns out to be a lot more tricky than I thought, because the character isn’t really mounted to the camera like normal FPS games, I’ll maybe use a array to get the arm to track to the crosshair.

You could make a script to place an empty at the end of a ray cast by the camera, wherever it hits an object in the world. Then make the arm track to this (with a delay factor). This is also useful as you can use this empty for many other things.

Awesome work by the way! I personally like the helmet, but expanding the view isn’t going to work against it

When you say arrays, are you referring to the list structure of vectors and co-ords?

When you say arrays, are you referring to the list structure of vectors and co-ords?

Depends on which one will work better, the method that you just suggested was the exact idea I was thinking of. ^^

Thought you guys would like to see the original character. After the model was shot down I decided to take the model and add him into UDK.

Directly exported from Blender into UDK. This exact character I used in the video above.
All I had to do was get rid of the old helmet to fit the camera, reason for this was, the way I made the original character’s helmet, the player would’ve never been able to see through it. 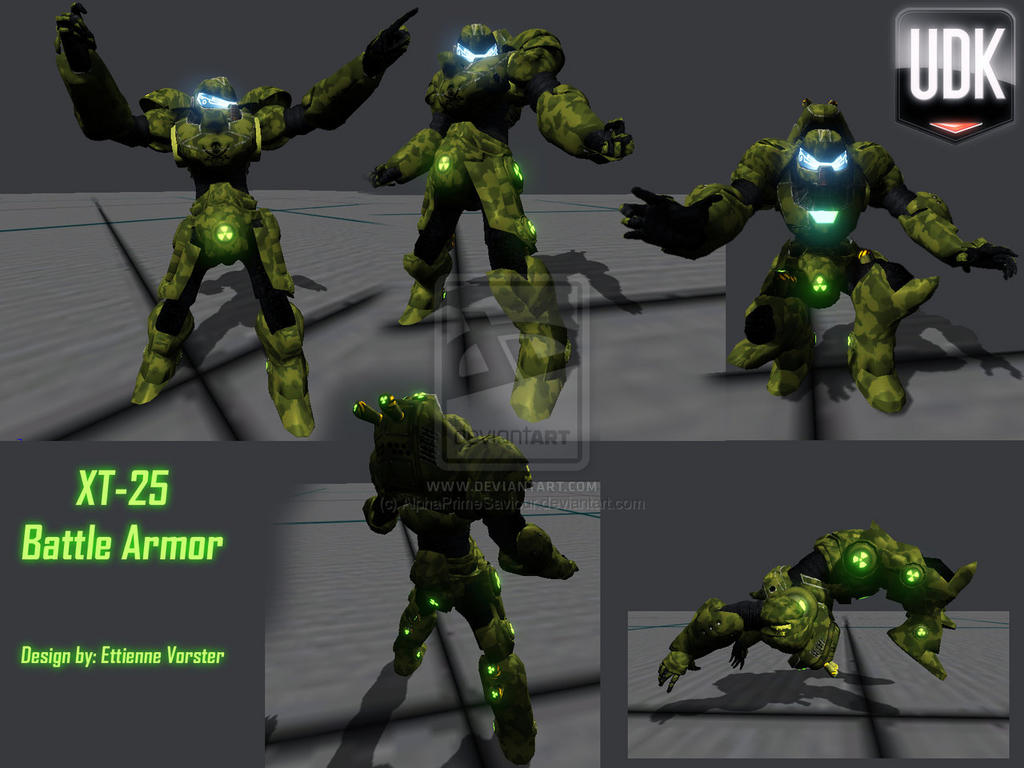 cool! Are you planning on adding more types of battle armor?

How did you get it into UDK? I’ve been sorting through a ton of tutorials, and still can’t get it to work. They all say “one Mesh, and one Armature” are neeeded to export to UDK, but I can’t seem to get it no matter how I set it up.

@Raven IIC: Well this was intended as only a test, I wanted to use the character for something like a game after the model wasn’t chosen for a previous project I was working for.

@turbomonkey: This was a mission and a half for me, it took me about a week to get everything working, mostly the rigging part, I didn’t use a custom rig, I tried to rebuild the UE rig, because at the time I couldn’t find a rig made for blender. Rigging is the hardest part of all, getting UDK to understand the rig.

I was still learning how to do it in UDK, now I know how to do, but I don’t want to go through all that again.

Thanks for the comments all.

I’m currently busy with something else, that I hope to make a full game of…

So if I just wanted a simple plant, or tree model exported. I would have to have that? Can you export models without a rig. What if I don’t plan on animating it.

Yeah, the static meshes can be exported as a normal “.ase” or “.lwo”, two file formats that blender has built into it. Even if you have a rigged mesh and you want it static export it in its current pose as a “.ase” or “.lwo” and UDK will remove the rig but keep the mesh in the pose you exported it from blender 3D.

kwl stuff i liked it

keep it up dude

How did you make it so that you can see the battle armor exterior? You know, the damage indicator, I assume, at the top right corner.