Here is a personal challenge I did from beginning to end.
I have already made one 3D character before, based off of a drawing I did here:https://blenderartists.org/t/character-design/1357207?u=aliceinwonder
and I made some 2D Pirate Frogs but none had this sort of end result.

The goal was to make the head of a character, go through all the steps and achieve the end result. I decided to go with Jinx from Arcane as I just watched the series, which was amazing even though I did not play League of Legends.
I was inspired by the style and the way the facial animations helped make their personalities come to life.
I found a time-lapse on YouTube from FlyCat, where they modeled Jinx.
Link for FlyCat video: https://youtu.be/k9jHNW56HXs

They did a great job, so I put myself up for the challenge and slowed down the video and did my best, only doing the head and shoulders. It took me about 72 hours until the end result and now I know what goes into a full creation, and that I can do it.
Here is a collage from beginning to end. I will also break down each part for anyone interested.

After 7 hours I managed to get the lips outlined and the eyeballs in, as well as adjustments to the facial structure. Lips were very hard for me. I tried a few times before this result and this ended up being the best that I could do at the time

After 13 hours, I created a monstrosity…I forgot to sculpt with the mirror on, so everything got uneven and the eyes took on an alien appearance👽. I added a place for the hair, to which in this end result, did not flatter the face. Plus I got rid of the neck and shoulders as I didn’t like them.
BUT! I was quite happy with the lips and nose

Jinx_16hrs898×916 38 KB
16 hours in and it started to look somewhat better after adding the hair. I also knew that those eyes were BUGGING me😆but overall I was starting to feel better about where it was heading compared to the previous day.

Jinx_18hrs828×811 45.8 KB
Ok, 18 hours and she is looking better! I fixed the eyes by making them smaller. The eyebrows, and eyeliner made a difference. I also fixed the brow and nose bridge.

24 hours in, and at this point I was getting excited because it was actually starting to look “good”. The color and the braid detail started bringing her to life. I also finished sculpting the ear. I had to watch a tutorial as I was struggling with it.

Jinx 26hrs976×1111 40.1 KB
26 hours, I was so happy with this result. I added some lights, and finished the hair tips. Lights made a world of a difference. I also added the neck and shoulders again.

Retopo over character2880×2880 288 KB
29-53 hours in. Retopology! I enjoyed this part a lot and I cant wait to get better at it. I found the retopology actually looked better than the sculpt

Jinx_Textured816×1047 51.2 KB
67.5 hours and even though its not exactly like Jinx, I’m happy as it is my own. Kind of doll like. I found that making the hair was difficult, mainly because it took some getting used to how to move the vertices to get the hair in place.
Baking Normal Image Textures and Ambient Occlusion textures were confusing. I had to fix it after baking because the details on my sculpt were not very good, and seemed to show up in places that I did not want or like.
In the end after some tweaks, texture painting, and lighting, it was finally looking good, in my opinion, based off of what I am capable of at this time. 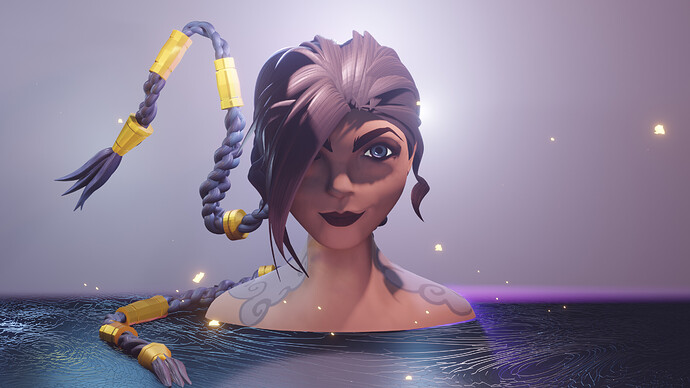 Now I am so happy with the way this turned out in the end, around 72 hours after.
I tried to do the quick smoke like the person did in the time-lapse, but I couldn’t get it to behave like theirs. I ended up with this cool looking fog block. I didn’t have any materials to use to make a floor like the one in the video, so I tried messing around with the texture nodes I would be familiar with, not to take too long with this step. I ended up making it look like she is in water, which worked well as she does not have a body.
I positioned the hair, tweaked the features, added a glass BSDF for the eyes, added the particles like in the video.
In an attempt at creating Jinx, I ended up creating someone else entirely and a different result all together.
This was a good learning experience, as it allowed me to learn all the steps involved in creating a character from beginning to end. This is the best I can do right now. I enjoyed watching how the character went from something uncanny to something quite nice

I hope you like it, and I am open to feedback. I’d like to know how long it should normally take to make something like this.
Thank you if you read this far! 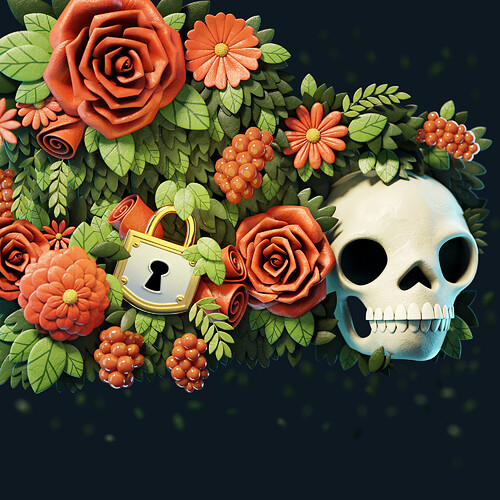 Wow, I did not expect that. Thank you so much