I’m working on this creature to put into an animated clip. At present I’m actually working on the scenery for the clip, and the creature itself is nominally done. However there are some tweaks that I’m still interested in taking care of. 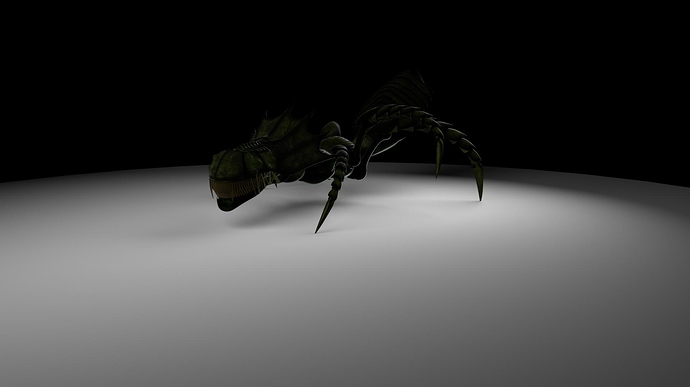 It originally started life as this: 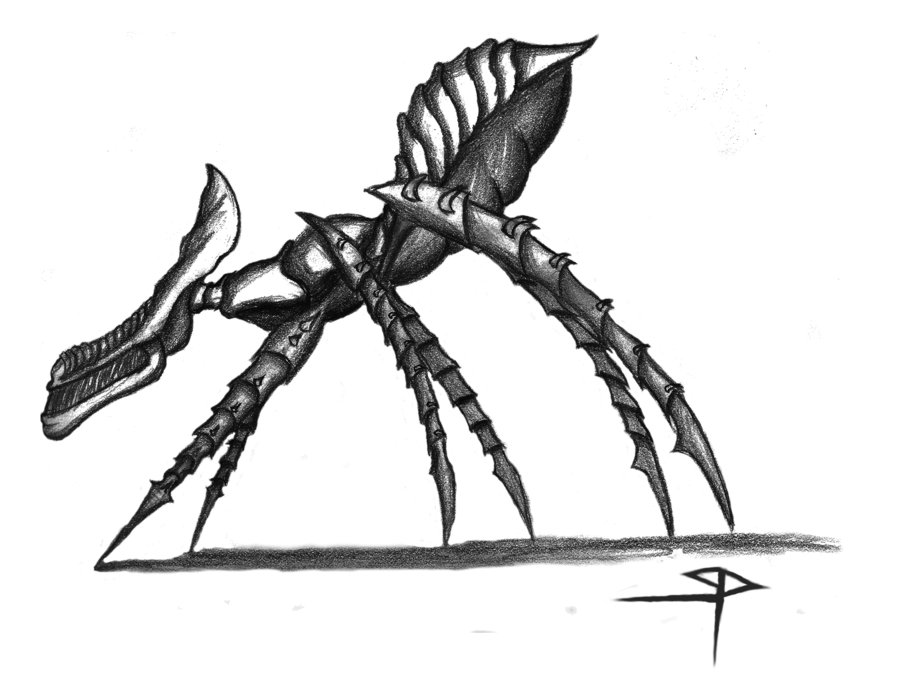 It was a rough sketch I did as a bit of fanart for a webfic about aliens invading during WWI. For a long time the sketch just sat on my deviantart account doing nobody any good, but then I had a potential client who was looking to do some creature effects in a project that I was set to be VFX supe on. I originally was going to hire CG artist who was really good at creature effects. In the end I actually had some trouble finding someone with the required skillset and who had a reel that was good enough for the kind of project I was working on, so I decided to dust off this old sketch and whip up a proof-of-concept to demonstrate to the client that I can do creature effects. Anyway, long story short, this thing was the result.

The primary tweaks that I’m working on involve the teeth and the tendons around the jaw. I’m looking to make them look like a highly refractive resin-type stuff. The trick is that I don’t want them to just be clear, but have a slight sickly green tint to them to match the overall coloration of the creature, however the problem with making them refractive is that the final appearance and coloration is highly dependent on the lighting in the scene. So in some scenes they will look just right but in others they’ll look almost neon green.

The version you are seeing is actually not the most up to date as that uses a combination of an anistropic BSDF and a SSS shader. Right now I’m using a Glass BSDF, but the trick is that I want it to be somewhat shiny, but the shinier I make it the more glass-like it appears since the roughness setting seems to control both how fuzzy the refractions are and how glossy the surface is. I’d like to be able to pull the specular properties from a different node so as to be able to blur the refractions, but make the surface nice and glossy, but I’m not sure I can do that. If anybody could give me some pointers, that would be great(I’m working in cycles BTW).

As for the rest of it, the exoskeleton is more or less either a smooth or bump mapped iridescent material that I made using some mixers and a Layer Weight node with the ‘facing’ output driving the factor input on an RGB Mix node. I also “airbrushed” the textures using texture paint to give a little more detail to the surface, especially on some of the smoother plates. Finally, some of the more detailed plates were achieved using sculpt mode and the multi-resolution modifier.

The creature is already rigged and ready to animate, though that isn’t my strong suit, so we’ll see how easy it is to really animate this thing when I get to that step.

I’ve rendered out a “turn table” 360 degree view clip of it as well, but I’m not sure if I’m allowed to post videos yet due to being a new member.

Anyway, let me know what you think. I’ll put up an update with renders of the scenery when I get that part finished too.

Cool model, but it’s kind of hard to see because of the lighting, and the scale of the creature within the frame.
(edit) and welcome to BA

So, I got some progress on the scenery. This one still needs some more modelling, as well as some work on the textures, shaders, and lighting, but I thought it was worth a render. 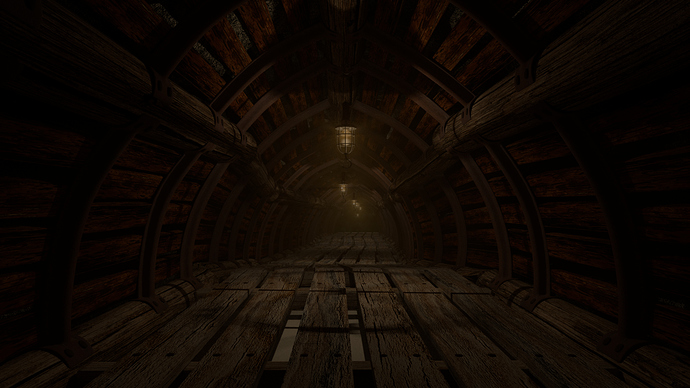 So this is the original render. I was having trouble getting the exact look I wanted, so I popped it into fusion. I bumped the highlights and dropped the shadows a bit tried to make it look a bit dirtier. Then I gave it the Abrams treatment, and I’ve got this:

So I got a bit side tracked by work, but I got back into working on this recently and finished the tunnel scene and have started animating the alien inside it. Here is a still from the scene:

I’ve been having issues with the volume shader for the scene making my renders way worse. Any pointers on that would be greatly appreciated!