AMD Navi2 - will it deliver

For us Blender users - main thing is will drivers/compliers improve to provide better OpenCL performance, pending if Blender Dev team has the time to spend time on coding this?

The AMD Big Navi / RDNA 2 architecture will power the next generation consoles and high-end graphics cards.

I’m really watching this closely too. I was primed to attempt to snag a 3070 as soon as they release tomorrow, but I’m convinced to wait until we at least see what these AMD cards can do!

It’s always seemed like we had to (ideally) use Nvidia hardware for Blender simply because of the CUDA cores, and AMD users seem to have more troubleshooting and general AMD-particular wonkiness to hassle with.

If a heavy-hitting AMD card hits the market AND it provides a smooth Blender experience though? I’d jump ship from my GTX 970 in a heartbeat! (Not to mention I’d much rather support open-source drivers from an idealistic Linux-user standpoint.)

I don’t notice this discussion happening much lately though, has the AMD experience with Blender improved much? Would love to know, or at least know where I could find out.

Another thing to remember (and a reason why I have been delaying buying a 30xx card) is that the nvidia cards are mostly limited to 8gb/10gb of memory, and with textures you can easily max this out (I’m maxing this out all the time on a 2070 super). You need to spend like £1400 to get a card with a significant uplift in memory (3090, 24gb).

The only issue for me, is that Blender doesn’t seem to support / get supported by AMD very well, in that there’s no equivalent for Optix/Cuda. If there was a solution for this, then the AMD cards would be immediate no-brainers over nvidia right now.

I’m still considering AMD, as the price/performance and the big bump in video memory is just hard to beat. I may just have to do what I did with Ryzen, and gamble that companies catch up and push out ways to leverage all that power.

Yeah the 16GiB are definitely tempting. Just imagine two of those hooked up together and tracing rays like there’s no tomorrow. I haven’t seen raytracing benchmarks so let’s wait.

With regards to Cuda equivalent. That is what OpenCL is. but Optix. Fully agree, nothing yet. We’ll see what their ray tracing cores offer and how its implemented using open sourced mechanims. So far they only mentioned DirectX 12 ultmate support (or similar) which definitely isn’t open.

With regards to Blender developers, and workgin on OpenCL. I will be honest (even though all I ahve is Radeon cards), I fully understand with their limited resources/developers up to recent they had to concentrate on the larger portion of the market which is Nvidia.

I hope this changes.

AMD definitely has surprised a lot of people

It will be interesting to see real world benchmarks, especially with all the tricks AMD talked about in combination with the new 5000 CPU’s.

Cuda is still a thing, so that one might be a showstopper for some of us. But as I’m looking into a new system, all this makes AMD even more interesting.
Price wise it is very competing, and that’s only good for us customers.

Main stuff is that we get some real competition in GPU realm after all. Bad news is that manufacturer have his goals. 3D artist are smallest customer base. No one care about us

Nvidia heave very nice YT channel, they invest in 3D… But this is more or less just PR stunt. They can afford this. Anyway I wait that AMD invest more in 3D art. For now his goal are professional market and gamers. I’m sure that you notice that AMD on his presentations focus on gamers.
bonus video 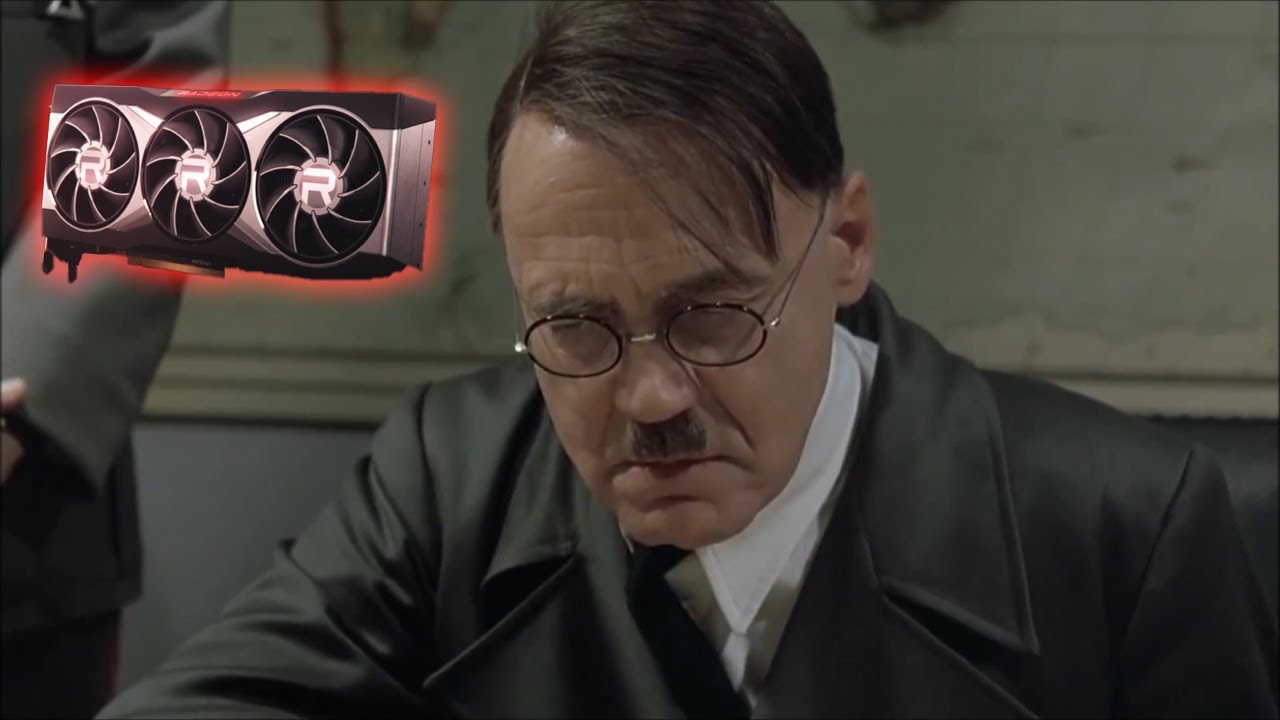 So maybe after all we see more real prices in future. Both manufacturer too long play games… Or they will again make undertable deal.
1 Like
Grzesiek (Grzesiek) October 29, 2020, 11:15pm #9

OpenCL is a direct “competitor” to CUDA. The only thing that is a showstopper is Blender Team spending time to polish the OpenCL code as much as they did CUDA. up to now there wasn’t much of a reason.

Vulkan work is “kind” of being worked on, but mroe for Eevee rather then Cycles.

I’m sure that you notice that AMD on his presentations focus on gamers.

That was just the first presentation

Oh, now I can sleep well

I just wonder how the RT will be exposed (via OpenCL?) for blender to implement.

I know you can’t say when, but i do hope before sales go live

That statement is incorrect. They have stated time and time that OpenCL drivers were the issue. CUDA is just better technology all-around, they have no control over this, please don’t add to their burden.

eg. during 2.81 release, OpenCL render time slowed down by 50%. even with bug reports, and being related to a new noise shader, they proceeded to release the version. They priroritized new feature instead of pulling it back to fix it. Took 2 full releases before they fixed it because it was NOT a priority for them. This was direclty documented by a developer.

Again I fully understand why, simple market share, but they put the burden on themselves.

Another instance, during opencl work, an AMD employee took their own time and fixed OpenCl making split kernel and submitted it so taht OpenCL/AMD could work when Cycles was developed. Though took a bit of time. Agin FULLY understandable as Blender team was extremely small and had to prioritize largert market.

Third. CUDA is not good, it is propriatary. Nvidia GPU does “support badly” openCL on purpose. To ensure others would move to CUDA over an open standard. If Nvidia ensured OpenCL woudl be on par with their own CUDA impelmentation on their onw GPU’s with their OWN drivers, Blender foundation would be keen on supporting only OpenCL.

Also, to clarify I don’t “ADD” to their burden as they are making what they want. And even supporing Blender Fund, they will do what they want with my money and I"M OK with that. As long as they push Blender forwards I’m HAPPY (even with their lack of OpenCL work)

Another instance, during opencl work, an AMD employee took their own time and fixed OpenCl making split kernel and submitted it so taht OpenCL/AMD could work when Cycles was developed. Though took a bit of time. Agin FULLY understandable as Blender team was extremely small and had to prioritize largert marke

This was only done by AMD because AMD´s own drivers could not run Cycles for quite a long time. Meanwhile it ran on nvidia´s and even Intel´s IGP (!) OpenCL drivers…

Correct, missed that part. Indeed that was true, but due to limited dev team, Blender team was unable to spend time to split the kernel or any other tweaks to get it. again I fully understand why. Such a small team, they needed to concentrate on the larger populus.

Thanks for the correction/reminder on that one.

Now back to main topic.

Navi 2 - if it will be OpenCL for main compute, will AMD/Blender work together to fix this? And will Ray Tracing be vai OpenCL or another Open Source or propriatary language similar to Optix?

Or will AMD concentrate on ProRender and leave Blender to their own?

I think AMD has good reasons to support Blender regardless of the outcome of the OPENCL situation simply because their CPU lineup is doing so well -especially in rendering workloads.

I gotta admit I don’t have a link right there under my hand, but basically everytime somebody says “hey you prioritize Cuda over OpenCL” and a dev happens to walk by, they explain it. I know I’ve seen Brecht write it before. Probably should be stickied I guess
Apologies for poorly wording “add to their burden”, I meant cultivating what was stated to be a false belief. I’ll try to find the statement again so we can make sure what was said

Indeed, I remember Brecht explaining that he based Cycles on CUDA because it was simply there offering more for a GPU use before OpenCL was capable of doing it.
And when Cycles basis was there, it gets more complicated to exploit OpenCL for Cycles architecture.
During the time that work was done for OpenCL, CUDA did not stop to evolve.
So, naturally, Cycles devs wanted to see what they could do with new stuff.

So, I think there is a logical gap just due to the fact that CUDA is anterior.

Although NVIDIA dedicated one of their employee to Blender development, Patrick Mours who did Optix work and who is currently doing NanoVDB work.
Cycles devs are working with AMD, too.

You can think of Hybrid rendering as a way for AMD to deal with optix until they can make their own dedicated ray-tracing api (hybrid rendering is as close as you can get to optix speed on AMD side even if it means consuming more power (cpu+gpu at full load), so yeah…consume more and render a “little” bit slower is the price to pay if you want to stick with AMD (for now).