Ampere ~43% faster than Turing in OctaneRender 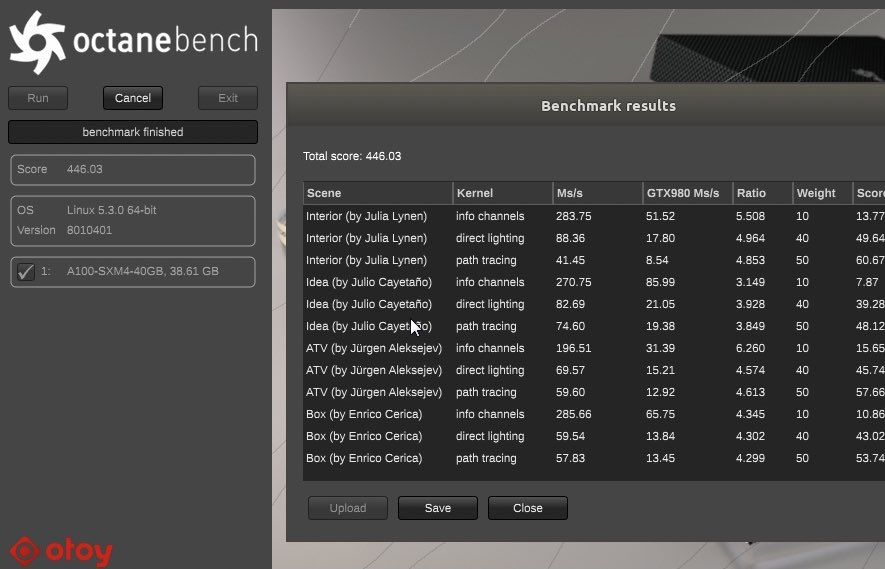 AMD, it’s time for your move.

i prefer to measure performance per $. Thats really all that matters. how much bang for your buck. If Ampere A100 is some $10,000 compute card that can be beaten by 2 X 2080ti gaming cards even in rendering. Then Ampere is a huge step backwards.

GPUs like that A100 are not about bang for buck but absolute performance and the best binned quality silicon for reliability. It’s important to have as much performance per volume for datacentres as it is for performance per watt.

You’ll always find much better bang for buck in the gaming range which is why nVidia do not allow gaming cards to be used in datacentres and will refuse to support the whole datacentre if gaming cards are used.

At least we now know that the full fat die performance is of Ampere’s shaders. If 40% uplift is across the range I expect the 3080Ti 102 die will jump the Volta performance with RTX off which would be pretty impressive.

I wonder why RTX was not tested? Maybe the performance if ray tracing is under NDA?

In 1-2 months there will be RTX 30x0, 40% faster than RTX 20x0 for CUDA cores and 2-4x faster for RTX cores.
What’s more, in 3-4 months AMD will release RDNA2 cards which probably will be comparable performance and lower priced.
When AMD released Thredrippers, Intel dropped prices of HEDT processors by 40%.
Conclusion: if you’d buy 2080Ti today, it can lose 50% of the value in 2-4 months.
The second half of this year is a big leap in graphics card performance.
I hope the situation is more clear now.

Well he has a point with :

i prefer to measure performance per $.

the question is: are you a hobby user where $ for buck is important or are you a commercial user where saved time is = $ and thus an expensive card is actually cheap.

The A100 compute cards have their place…The Quadros have their place i guess if they supply really valuable driver support to your most needed software and you’re a company. But will the Titans and gaming Amperes offer good value price/performance wise… yet to be seen. People expect a good performance uplift for the same price as last generation.