Made this one for a small project of mine. Didn’t have any reference so there are a few mistakes. 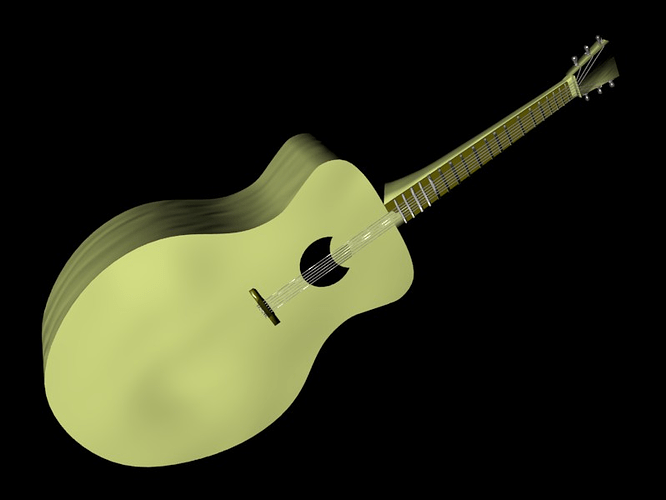 If you remake it frome scratch with a referense image, this maybe could look good. Sorry for putting it this way but… the reason you don’t get replies is because it doesn’t look good!

You’re being quite harsh these days [Kothe]. That looks quite good to do it straight out of your head but if your going for realism then references are a good idea. The major change you should make is that the body is far too big and deep for the handle (or whatever its called). You might also want to work on the wood texture a bit to get that grainy effect.

Uh, well, I guess it might look sort of like an acoustic guitar to someone who doesn’t play one.

The frets are spaced in such a way that you’d get a VERY weird scale. But then, the strings are too close together to play it, anyway. And the strings of a guitar don’t go out to the edges of the peghead. And the bridge would be somewhere in the middle of the lower bout. And there would be a bridge saddle, and some bridge pins to hold the strings on (or some other arrangement).

I’m afraid I agree with Kothe – it’s just too wrong to be believable.

Thank you for your comments. Next time i blend a guitar, i will be sure to use a reference. I hope i do better with Peugeot in WIP.

Hey supernoob, kothe is just trying to give him some REAL c&c, its just the brutal truth.

You’re being quite harsh these days [Kothe].

I’m trying to give the crits that i’m thinking and not some censured “to be nice” crits. I have realized that’s the only way to get real crits yourself. I never want the censered type of crits, that doesn’t get me better!