Hi,
I created this image for the blender guru sci-fi competition.

Edit:
I put some work into the alien skin mat. I think it better now.
Maybe in the near future i’ll try less shiny shader for the ground… 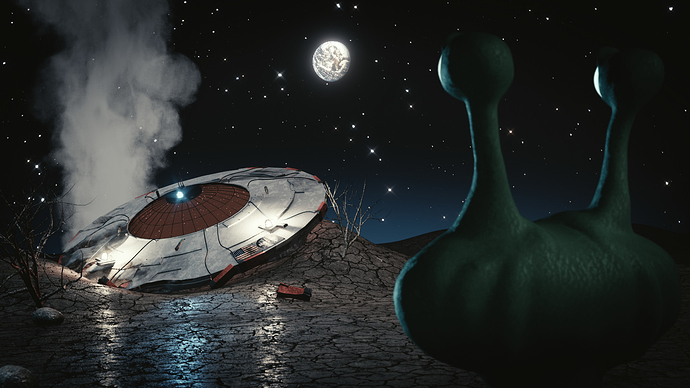 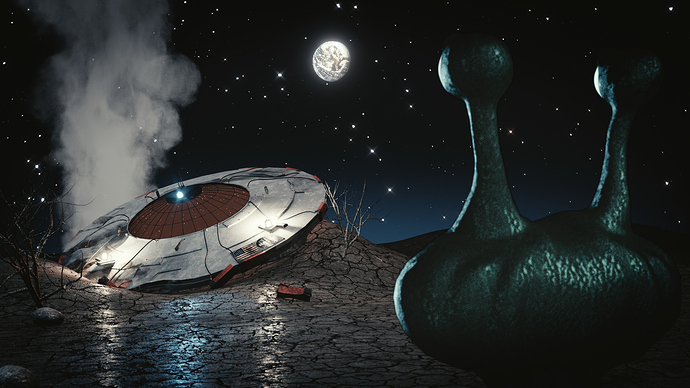 I love the general render. The background doesn’t look bad. Just the object on the right that looks shiny and the texturing perhaps not the best. The smoke and the spaceship are cool

@Kugikrug: Thank’s for your kind words. The reflections indeed too shiny. Hope i’ll find some time to recreate it.

@Kirk: I’m happy you noticed the twist! I hope it’s note to subtle.

@nkansharexford: Thank’s! No doubt the alien need some work…

The flag is just right, any bigger it would be too obvious. I don’t mind the reflections on the floor, they give the image a slightly other-worldly look. The alien does need some work though… Either that or ramp up the DOF and make him less obvious;) good luck in the comp.

@MonkMonk: Thank’s! I tried to better the alien skin shader. I updated the first post.
(sorry for my bad english…)

Your English is better than my (insert any language here). The Alien looks better now. Was the smoke done in post?

yes, I assume that my english is better than your hebrew… anyway, I used the smoke simulation, rendered with BI, and composed in blender compositor.