It’s been a long time since my last entry, and I was so looking forward to share this with you. So the moment has come.

First, let me introduce you Mr. Clayton, my elder naughty twin brother. You can get more information about our historical meeting here, in my blog. Maybe it is necessary to understand better the composition. 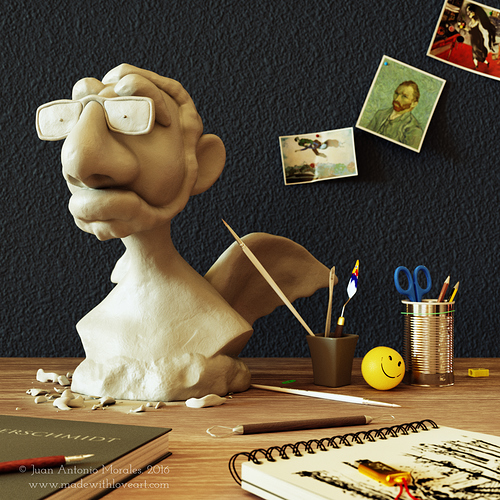 I have sculpted the bust in ZBrush; everything else has been modeled is Blender, as this is my workflow.

Special thanks to Doris Fiebig for her clay material tutorial.

I have also rendered a stereoscopic version for red-cyan glasses. Do you have ones? Try it out! Health and Love for everyone!!!

Hi, Mr Chuan
Oh okay it is what I was thinking, you are not alone in your head :).
More serioulsy I find, I don’t know why, the first picture relaxing the render is very nice.
For the second picture I search in an old box for a pair of anaglyph glasses to see it and the render is very cool (but I lost 2/10 to each eyes

Thank you Grabeunwik! I think you are right. Maybe the image has too much dark colors to see the effect. Next time I’d love to try with a brighter one. It’s funny to see the pics in 3d like this.

I have used these glasses for watching the image in my computer. I lose some lightness but it’s not bad. Anyway, I had a few more, as you can see here.

And yes, I’m not alone in my head

Thank you for your suggestion, Wikifry. Actually, I made it inside Blender, using its stereoscopic tools. I rendered the image directly in anaglyph mode. But I guess you mean it would have been nice to tweak the bright contrast values or something, in order to get a deeper effect, don’t you?

Maybe I could even have increased the gamma and the exposure of the scene previous to render. But only in the stereoscopic one, as I like the 2D one the way it is.

Regards, have a nice day.

(Now for everybody) My table is inspired on a real shelf I have on my living room. It is actually the same one that I have used on my first images, but less glossy, cause I wanted to make it look like a work table.