Gday everyone
I started this fish sarvo, I surprised myself i’m pretty happy with it so far
any comment, suggestions or questions most welcome 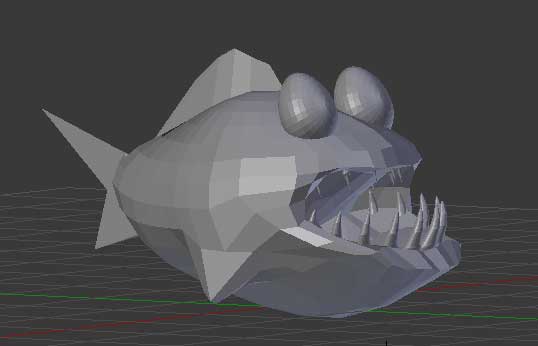 looking good so far, keep up the good work.

That’s a solid start for the blocking out. From what I see, especially the eyes, it looks like you are going for a kind of cartoonish look, right? The edge flow would need a bit of refinement regarding the fins and the lower half, though. Keep us posted

thx @m_squared, @minoribus yep going cartoony, it’s my first model i’ve done like this, not sure what you mean about the edge flow? whats that? cheers
NoHands
heres a update pic 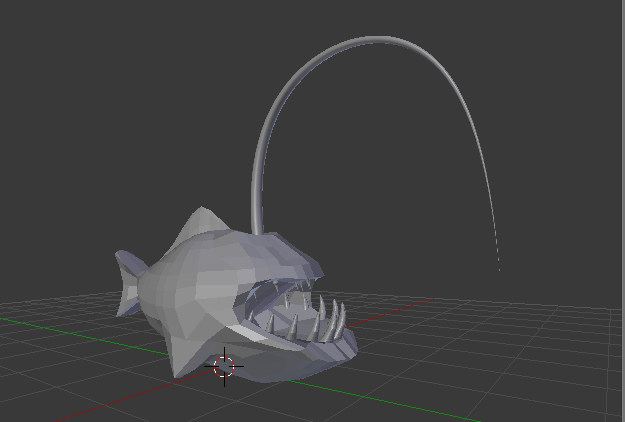 I saw your other modelling attempts and you’re getting good fast. I’m just starting out as well, but you put my abilities to shame.

And you did all that with just your chin??? Wow!

Thanks Anthony i’m happy with how i’m catching on, how are you going what are you modelling i’ll try keep up with u

You are advancing really fast and the new mouth of the anger fish looks good. It makes it appear more aggressive.

@minoribus … not sure what you mean about the edge flow? whats that?

Well, since you asked, here are some rules of thumb that are important when building a model.

Edge flow is the way the edges run along the surface of your model. Normally - especially for organic models like yours - you want the edges to form smooth lines with no sharp turns. Even if you build your model with a low amount of vertices.

Another thing you should avoid in organic modeling are so called ngons. These are faces that are made of more than four vertices. These ngons also don’t give best results with the subdivision surface modifier.

Next thing is, that it is best to have all quads at nearly the same size end evenly spaced. And the quads should look more or less like a square.

And another thing are so called poles. These are vertices which have less or more than four edges connected to them. They also tend to cause problems with the subdivision surface modifier. You can’t always avoid them and in some cases you need them, because they play an important role in controlling the edge flow. But it is important where they are placed. They should be placed at areas of the model which have a low curvature.

(For hard surface modeling, like architecture and mechanical stuff, it’s another story, because ngons and tris and poles don’t matter on planar surfaces. But it’s good practice to use quads there also. And quads don’t cause problems if you want to export your model to other software packages.)

I see at least some ngons in your model (the upper face of the front fin and below the lips for example) and also some poles (for example where the fin is connected to the body and again below the lips). And I guess there are also some tris because ngons and poles usually come together with tris. That’s why I spoke about the edge flow.

Here is a short video about whats happening when you use the subdiv modifier. Although it is using an older version of Blender the principles still apply.

Thanks Anthony i’m happy with how i’m catching on, how are you going what are you modelling i’ll try keep up with u

I haven’t done much modelling yet. I tried to make a few complex shapes but failed miserably, so I’m starting with simple things that I know I can handle, like animating a cube. lol. I’ll be posting something soon.

thx heaps @minoribus i’ll get onto my model into square polygons that is great info for future modelling.
@anthony the first organic model i started modeling i put on here n everyone told me start on something easier and keep it low-poly, thats why I made the deer

@@minoribus Thanks for sharing the knowledge. I learn quite a lot from it:p

Well done, Shane. I could immediately tell it was an angler fish, even before I read the thread title (because I clicked the link you sent). Just out of curiosity, is this a 3d modeling exercise for the screen, or are you looking at 3d print?

Next thing is, that it is best to have all quads at nearly the same size end evenly spaced. And the quads should look more or less like a square.

That’s generally good advice, but it’s mainly applicable if you are planning to sculpt the model. It’s particularly important if you plan to highly subdivide the model and sculpt in fine details. In that case, an even distribution of similarly-sized quads is ideal, and you really want to be avoiding poles and triangles as well. And ngons are just right out… don’t use them on a subd model, period (though, they are often a very useful intermediate step when modeling; just be sure to break them down to quads at some point.) You can identify ngons in edit mode by opening the 3d View Header > Select > Faces by Sides tool and choosing Greater Than: 4 which will select every ngon. But these things are all highly dependent on what you’re trying to accomplish with the model. If this is a purely sub-d model and you’re not sculpting in high-frequency details later, then you’re going to find that you’ll have to add in extra edges loops in areas where you want the edges to be sharper (in your model, this will likely be around the lips) and so the quads are going to be smaller in this area than in the rest of your model, and that’s ok. There’s no use adding extra geometry to the rest of the model to make the quad sizes the same because you want to use as little geometry as you need to get the job done… areas with less geometry will take on a smoother appearance when subdivided (usually a good thing), and the model maintains a lower poly count as well. Also, if you’re not sculpting, don’t worry too much about rectangular shapes either… you don’t want ridiculously long thin polys but you can use 2:1 ratio (give or take) rectangular quads without much trouble in most scenarios. Essentially, the ideal sculpting mesh and the ideal subd mesh are two quite-dissimilar things. The more models you make, the more you’ll find out what you can get away with ;).

Ahh this is embarassing, i think youve modelled something much better than i could with your chin alone. Massive credit for that mate. I cant add much constructive critiscm but just encouragement to keep at it. Look forward to seeing more of your work

Gday everyone
I didn’t wanna reply to this thread until i had a update pic
i tried my hardest to make all quads but ended up with a few ngons but i got rid of all tris (I think)
I added a tounge and changed thexside flippers
what do ya thunk? not lookin for praise lookin for constructive criticism 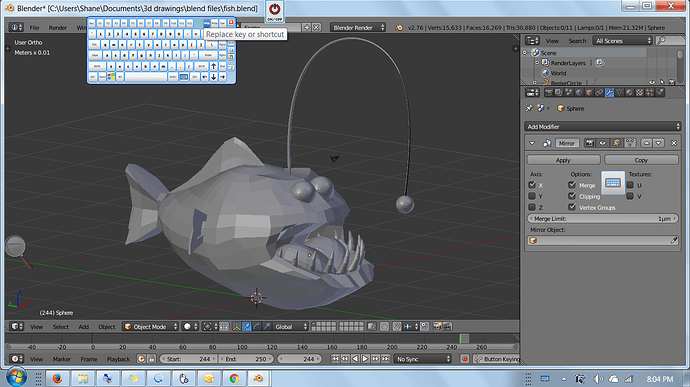 Looking great, keep going with this one!

Looks good! Maybe try add some eye-sockets for the eyes to rest in

That tongue looks good. Ae you going to give him some upper teeth?

i’m thinkimg of putting a texture on the skin to make it not so smooth any ideas how?