I am wondering if it is possible (or even makes sense) to animate the rendering of the vector pass (see screenshot). 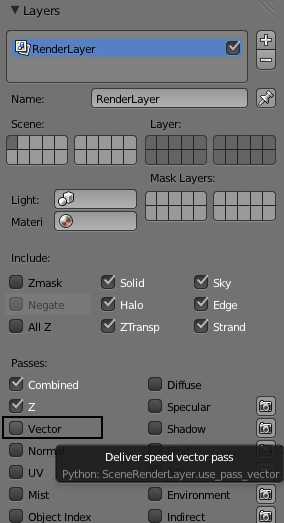 When I press “i” while over the checkbox, the error message “Could not insert keyframe, as RNA Path is invalid for the fiven ID (ID = SCScene, Path = use_pass_vector)” occurs

I read through http://aligorith.blogspot.com/2010/12/animating-in-25-getting-to-grips-with.html but could not find a solution.

The reason why I want to do this is because I have an animation with thousands of frames and most of the times only tiny movements are done - for this, I do not want to render the vector pass (which I use for motion blur) because this would save some time.

But for a few frames - where objects move quickly - I want to render the vector pass in order to do a motion blur (but maybe even if I should be able to animate the render pass I might have problems with the compositor, where I connect the Speed with a Vector Blur - this somehow would then need some animation, too (I guess))

Anyway, any comments are appreciated.

If you’re rendering an image sequence (which you should be anyway), you can render the without-movement frames without the speed pass. Then turn on the speed pass, and render only the stretches of frames that need blur. For correct blur calculations make sure to include a few frames before and after the movement.