Anime head, need thoughts on it.

Hi people, I was experimenting a bit with modeling something I’ve never modeled before. For past couple of years I was mostly modeling hard-surface stuff and rarely any human characters or creatures. So I thought I’d give it a try with an anime character, explicitly with the head, because it seems simple enough.

The idea was not to watch for tris and 5-sided n-gons for the most part because the head would mostly serve as a base mesh for retopology.

Any thoughts, suggestions? Should I first study the human and anime anatomy and learn to draw it so that I could have a better feel for it when I model?

The reference image should be packed with the .blend file.

It took me roughly 30 minutes give or take to finish it.

Here are the results: 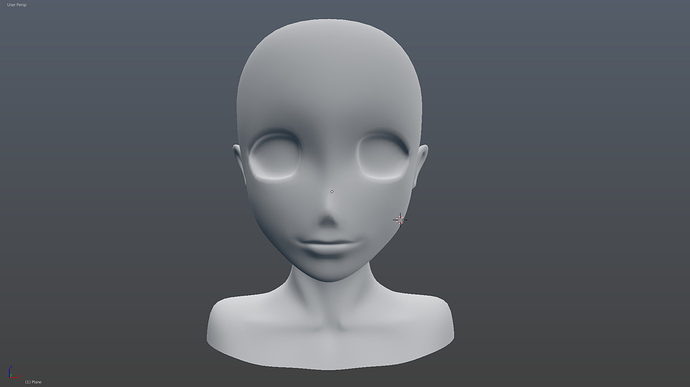 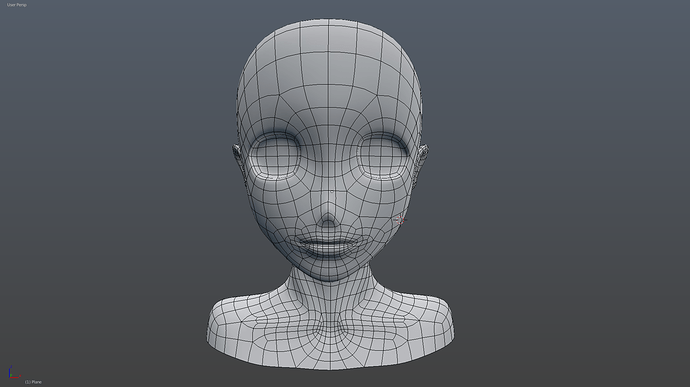 It is looking good

may be a better place for feedback can be here -> https://blenderartists.org/forum/forumdisplay.php?26-Focused-Critiques

Looks great, although there is room for improvement. Don’t follow the red lines I drew exactly as they’re rough approximations of what I believe it should look more like. First of all, the eyes should be lower on the face. This will become more obvious if/when you add hair. From the 45 degree angle view, I noticed a few additional things. The front of the forehead is a bit sharp and should be rounded out more. The cheeks are too flat and should be sticking out further. The neck looks a bit angular when it should be straightened out. The ears look elfish, which unless that was your intention, should be more round. The shoulders are too broad and shouldn’t be so horizontal. Also, the lips should be more smoothed out. The front and side views look good, although I’m not a big fan of those reference images.

Thanks for the creative criticism, @The Omnilord. I did correct some mistakes you’ve mentioned but some of them I choose to leave aside with a shape key just in case it’s a wrong decision for a shape change. I’m talking about the eyes… Now… I trust you when you say that the eyes are too far up but I don’t see how much exactly should I lower them, so like I mentioned before, I’ve added a shape-key for that. As far as shoulders go, don’t they need to be horizontal and a bit rectangular when It comes to female anatomy both in real life and anime?

Ohhh, but you were right about the cheeks and ears. Cheeks should have a been a bit more pronounced and ears do kinda look elfish despite that not being my attempt. I’ve enlarged the cheeks to my liking but I’ve barely did anything to ears, they’re still kinda exactly the same as they were when I started this thread. I’ve also slightly modified the general topology of the whole model.

I have to admit that I’m surprised that you didn’t find anything strange about the chin, since I see that it could be one of the most difficult parts to model. In anime it looks razor sharp from all angles but in 3D it just looks supper weird. At least in my opinion.

For the shoulders, it is possible that it can go either way due to the artist’s interpretation and style. I have seen artists draw sharp horizontal shoulders while others have drawn smooth, rounded ones. I also may have over exaggerated in the above picture (I drew it with a laptop touchpad so it’s kinda bad quality). The same kind of idea applies also to the chin, which I may have not criticized much for similar reasons. Either works fine, although it may depend on what you’re aiming for with your style. Smooth, rounded curves better portray a more feminine figure than straight lines, but sharp lines can bring together a contrast that can highlight certain features of the face and body.

As for the eyes, a general rule of thumb is that they sit on the middle of the face (yours look slightly higher than that) and line up closely with the top of the ears. This article might be an interesting and short read on why this happens often when making faces.

Why every face you draw looks a little Neandertal

Just about everyone draws faces with the eyes too high and a low Neandertal forehead, maybe because of the way we perceive the shape of the head.