Ok after I gave in on my last project I moved on to do a favor for a friend who plays MxO. (Matrix Online)

He wanted a custom Hover Craft, with the same basic principle but with some entirely new shapes. SO! I made this.

Type: Bullet
in a matter of 3 days (about 5 working hours, not counting rendering time, which was about 20 minutes by the end on my ATI card. BTW I was using the YafRay Renderer).

Also with some help from a friend on Photo Shop and about 5 minutes of work I had this:

Which he called fleeing the scene.

If you’re a noob, then I’m what? a noooooooob?

It looks really good! I’d try to set up a lighting scene in blender though. It will make everything look better.

Well I just wanted to be visible so they got the look of it, so I used a Hemi.

Truthfully Im a technical noob, Ive been working with blender on and off for only about 2-2.5 months now. I had started maybe a year year and a half and got as far as the old Ginger bread man tutorial and never finished the animation half of it.

BTW the main objects (the nose, glass, body, and wings) were hand made, moving individual verticies into place and ctrl+F ing them together. in the end I just subsurfed with a level of 4 (using a 1 in the edit window) and moved them together. The turrets are made using an appended machine gun from my other post (which is lost amids the others here) and a new spec value (which in another image you can see makes it green in light). And the hover panels are just a circle, with some extrutions and 2 materials one metal and one blue.
I also made up a rocket I called the EMMP, or Electro Magnetic Missle Pod, basically taking the EMP from the movies and making it accurate. this was made with a subsurfed tube, with a little movement of the caps, and a few subdivisions to add the blue color thats on the panels to the tip of the rocket.
As for the texture, i went into google and found some random purple art drawing of a stainglass window and tiled it onto EVERY object.

PS heres the other image:

Oh I forgot to mention, the random lines that are on the body came up when I subsurfed it, and wouldnt go away (i think its because I made it from a circle…) but in the end made a nice looking metal effect.

k well now Im sitting around waiting for help with a Poem i need to write for my english two class in school… (I prefer stories, essays and Advanced Physics from MIT over Poems) and I need some serious help…

I want to make my first character, and well I cant do human, or life like faces(life like as in anything organic)… or bodies for that matter. can anyone point me towards a tutorial on this?

You call that noob? dude that friggin pro! Awesome

Thank you Eion and Borgleader that means alot, and I might actually stick to Blender this time seeing as how Im actually getting it.

Now I just need to get some inspiration and a few more tutorials for animation and character modeling and I should be ok.

Ok well Ive found an idea for another single image before i truely start animation.
Ive never copied pictures before (esp. not ones that have the character on an angle the isnt sideways and facing forward). SO Im gonna give it a try anyways.

Now it isnt mine, nor is it something a friend of mine made, but it is an image i found on my best friend GOOGLE.COM

Im going to renderthis and practice rigging using it, since it isnt complicated enough to make me shoot myself or give up again. but there are enough parts to make the rigging difficult enough to make me realize exactly how to do it right, through experience and tutorials.

For now I have made the Eye and the face plate while I was in my typing class, but currently the computer Im typing from will not allow the CD I use to install right, so Ill upload the image at home. 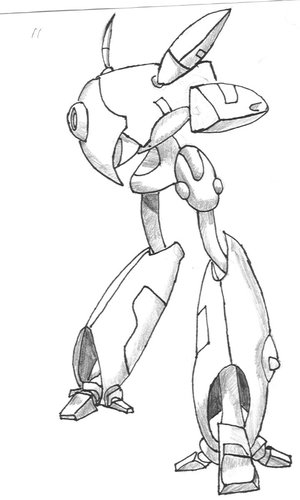 Well the image isnt looking to good.
Im starting again, but I dont knwo how I could do this with such an odd angle on the image.

Any suggestions? Anyone who could draw the same thing from side and front views?