This is my first large project built exclusively in Blender. At this time, I’ve had it posted for about two months, but I was discouraged from posting it to this forum.

At the time I made this, I had been working with Blender for 4 months. Please know, at almost 7 months now, I’m still a noob. Lot’s to learn, but I’m a veteran of 3D art, so it’s really only a discovery of the tool at hand.

This animation is based on physical data from an actual nuclear weapon simulator I developed a few months prior. The data and equations were based on U.S. department of defense data released over the internet. This is aproximately a 10 kiloton blast at roughly 5 miles away. It features a “thermal pulse” with approximated damage-at-distance based on attenuation through a 72’F atmosphere at 500ft above sea level.

The shock wave begins at roughly 30X the speed of sound but by the time it reaches the “camera”, it’s travelling at only slightly above Mach.

I have a blend file available, I’ll post a link if interested. I can also post the simulator I wrote if REALLY interested. It’s rough and unfinshed, but interesting and functional for basic educational purposes…

I would have been happier with volumetrics, but I AM happy with the way it turned out.
2.5, can’t wait!

Please give comments and criticism. 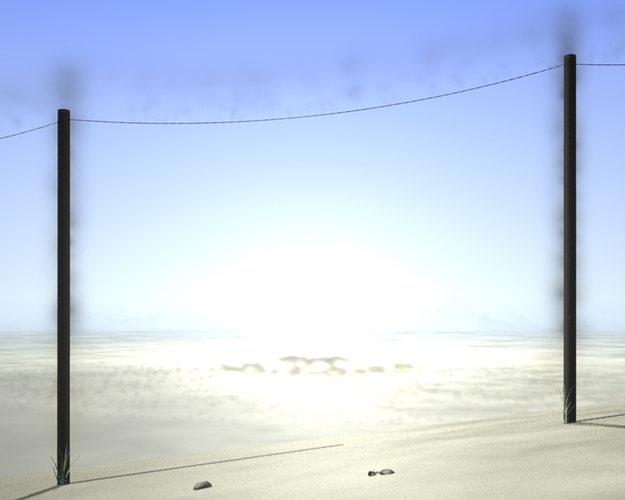 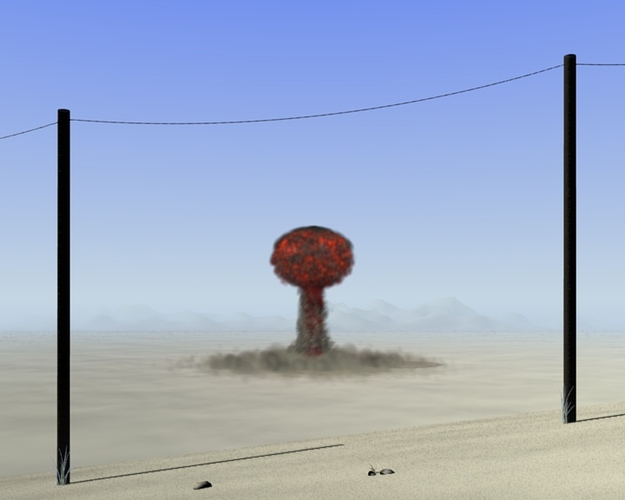 NICE! The Shroom cloud seems a little on the small side. But animation wise it looks really good. I especially like the delayed shockwave effect.

Thanks, ChojinDSL! I agree with you a little on the cloud, only I think that it is not so much too small, as it is too uniform in shape. Believe me, I messed and messed with it. It’s comprised of particle systems completely controlled by force fields. This was done so I could actually adjust the strength(size) of the explosion on the fly. There are no meshes to rework.

I experimented with empties(force fields) transformed through the cloud to generate some noise in the rotation, but it didn’t have the effect I was looking for, I eventually just removed them. I’m really looking forward to the Blender 2.5 smoke sim!

looks good dude only crit is like chojin said the shroom is too small, best way to resolve that is scale down the posts i think

uuuumm, yea, sorry folks, you probably need to watch the vidio in HiDef to see what’s going on.

I get your point, really. The problem is, there’s no “depth” in the image to show you where everything is. I am disappointed by that. Seriously. Now that I look at it.

Maybe I’ll come back to this project as soon as my current one is finished and add some buildings down in the valley. They’ll have to be utterly destroyed, of course!

You see, the telegraph cables are only about 40 ft from the camera, on the hill. Down in the valley, about 5 miles away, is where the blast takes place. I really don’t want to scale the telegraph poles down, because then they’ll be tiny.

Thanks for the input, it makes me realize what I’m doing wrong in visualization.

Nice effect, but if I remember well what I learned when I was in the army, during the initial flash there is only an emission of Gamma rays and neutrons. The thermal radiations are produced during the rising of the fireball. So, the thermal effect (visible through the smoke on the poles and wire) comes a bit too early in the animation in my humble opinion.

Looks great just wait till you start playing with 2.5 it is so easy to make the smoke… And light it. Is there a way to lighten the mushroom cloud in 2.49??? Are you using billboards?

Thanks for the input!

I really can’t wait for 2.5! I’m going to remake this whole animation once I have it!

And yes, I had to use billboards, it was the only way I could get shading and shadows to work correctly…it was extremely frustrating. I settled on a darker cloud after the fireball fades because if I lit the “smoke” any more, it wound up looking like “little spheres” and looked dumb.

There’s a material IPO lighting the color of the smoke over time, but I cut off the animation before it fades to a grayish color because, again, it looked a little goofy.

@ROUBAL: Thanks for the comments! I’m not pretending to be a professional on the subject, as I’ve never had any professional training in dealing with nuclear weapons.

I gathered my data from a few interesting web resources: If you’re interested in some technical reading, here’s a quick overview here. If you REALLY want to learn about nuclear fission weapons in great detail look here.

The 2nd link is a book. This book, completely published in pdf, is where I got the equations to make my simulator. It provides the equations that, given a “yield” or size of weapon, you can calculate initial prompt ionizing radiation, conversion to isothermic radiation, size and rise rate of the cloud over time, and the shock wave speed. It even provides a method for calculating mach effect—where the shockwave from the bomb meets the reflection shockwave from the ground, amplifying the initial shockwave and making it twice as deadly for twice the range. My simulator based on this, allows you to experiment with yields at different detonation heights to optimize “kill” distance. Yep, it’s a sick science!

According to this book, prompt ionizing radiation–gamma rays and soft x-rays, only last about 100th of a second for a 10 kiloton yield. Since our atmosphere is essentially opaque to this type of radiation, it undergoes a series of absorbing, and re-radiating only tens of meters around the bomb. This is where the secondary pulse you were explaining comes from. This secondary pulse is emitted from the explosion only after two things must occur. The shockwave compresses the air into a plasma at the onset of the explosion, making the shockwave incandescent, and yet considerably dimmer than the initial pulse. The air around the shockwave must become transparent again so it can no longer act as a “shutter”, and the ionizing radiation must be absorbed and re-radiated long enough to be emitted in visible wavelengths (light and heat) hence, the isothermic pulse. For 10 kt yield, this second, thermal pulse lasts about 0.6 seconds after the blast. Up to 1 second for a 1 megaton yield.

They say that while witnessing a real weapon detonation, you see an initial violet colored flash before the shockwave masks the core of the explosion. I even put this in my animation, however, you can’t see it because it was too quick to show up at 25 frames a second! Oh well.