Anyone with experience with the plugin "send to unreal"?

I got the plugin “send to unreal” by registering an account on their website and entering github. For those who dont know what is it, its basically a 1 click solution to send files made in blender straight to unreal engine. The plugin is often advised to blender users, because it is told that the FBX export of blender is broken.

I frankly never had issues with the standard FBX export of blender, but I suppose that advanced users will have some complaints.

I have a character that uses shapekeys for the animations, I was told online that to make shapekeys work in unreal engine I have to assign bones to them. I decided then to do a test, and the plugin “send to unreal” does not work for this task, the shapekeys are exported but they do not activate automatically when the bones to which they are assigned are moved.

If I do the export with the standard FBX export of blender and I check manually “Import morph targets” in the unreal engine window, then the shapekeys are correctly imported and activated by the bones, exactly like I was told they would have done by online people.

I didn’t do a lot of skeletal meshes, so I will not help you with your problem. But just throw in a random comment, that might or might not be useful

Send to unreal is great, especially the “live link” functionality. But about a year ago I switched to this one: https://github.com/xavier150/Blender-For-UnrealEngine-Addons and never looked back. It does support skeletal meshes, so maybe that will help? I even wrote and addon to that addon for helping with exporting many meshes at once.

yes I checked your addon and maybe it works, but there is a button for unreal 4, I wonder if it works also with unreal 5.

I am using unreal 5.1. I pressed the button already but nothing appears in the scene, I suppose I have to do some learning of the addon but I dont see it working.

I wonder if it works also with unreal 5.

It works. I’m using it (but with static, not skeletal) meshes almost every day.

So basically you push the button and the addon sends the meshes to unreal? I followed a video tutorial, pressed the button twice, but I wonder where the meshes were sent because I dont see them in the unreal editor.

I also configured the unreal project as it was previously to take meshes from “send to unreal”, but in any case if this addon does not exports the shapekeys activated by bone action I am still with the same issue.

Thanks in any case, the addon you advised is still useful because I see that it can create collision shapes and it has many options (that I have to learn about).

So basically you push the button and the addon sends the meshes to unreal?

No, it works differently. You push the button and it export it correctly as fbx (in a path that’s configurable in the addon), you copy script (another button, to copy it to clipboard) and you run that script in unreal. The 2nd step imports your meshes into unreal.

ok got it, sorry for my noob level, I will try what you say. thanks for your help

No problem, there is nothing to apologize for when learning stuff. We all are learning all the time

hope that addon helps you

Update. I tried several tools but they are all overcomplicated. At the end of the day exporting with FBX was the best option and it works. So I stick with normal standard FBX export. Thats about all

Hey do you know where the models are sent by default? I pushed the button many times and I think I filled a folder but I don’t find it

This are default settings: 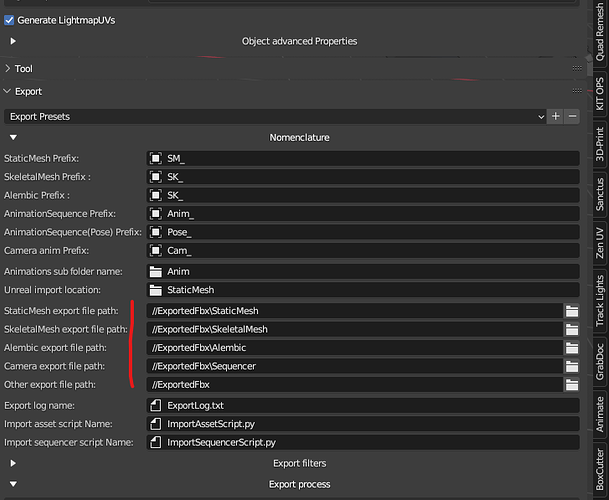 (they are collapsed by default). So if you didn’t change it it should be in ExportedFbx directory in the same place that .blend file is located.

I tell you the issue I found with the addon. Basically if you check the box “check potential errors” there is a message that says you have to fix the scale of the scene. If you do it, and export the mesh, it will be exported very tiny in unreal engine. This does not happen if you use FBX export or the other addon.

Have you got same issue? I think there is no need to change the scale of the scene.

I don’t think I clicked on this box yet

the addon works and I did another experiment, for some reason it created more physics assets and I changed them slightly. THere was an option to create collision shapes and I created 2 of them, but none of them got imported.

I suppose that the shapes you create in blender and transform into spheres or collision shapes in the addon are used in this place, right? 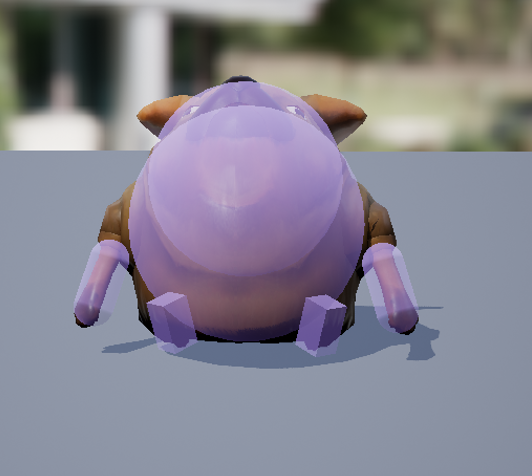 I’m not sure exactly how it works - but I watched a tutorial about that and there seems to be a whole workflow for collisions there. I mostly use the auto-generated ones or tweak them manually in engine. So far it worked well, but if I would need to do a lot of them that would be tedious.