Hello everyone. I’m reposting this here, because the other thread was opened for a different reason, but in order to avoid “pollution” in the thread list, I did post under another one, which is somewhat related, but not exactly the same thing.
Now, the question was, more or less, how can I select part of a texture removing unwanted parts.
The (partial) solution is to create a Bezier/NURBS curve and UV-Map it to the texture region I’m interested to, so I can elaborate the rendering results in nodes instead of using the UV/Image editor.

Excuse me sir, I really don’t want to annoy, but please, can you tell me if there’s some method to select? (here I was meaning in the UV/Image editor - note)
I just tried to hit “b” to be honest, but I see this won’t work. Are there any selection tools available?

Excuse me for such stupid question, maybe (again) the solution is just below my nose and I just can’t see it.

Edit: Almost got it, I thought about a workaround: 1st, import the image as reference, 2nd use the reference to draw a nurbs/curve object which will be the selected region, 3rd UVMap it and match the reference to the same texture.
This way I should obtain a nurbs/curve textured object which just uses the portion I’m interested to.
Then, either with render layers and/or with compositing nodes, do whatever you want with the image, after all just render the result to a new image.

The only problem I have is I don’t know how to unwrap a curve to UV.
I tried experimenting with the material, I get vertex coloring, but all the vertices are the same color, there’s no mapping. How can I do?

Finally, I have to add this (maybe it’s relevant, but I’d rather prefer to use a curve, not a mesh): I guess I can convert the curve to a mesh and then UV-Map it as a normal mesh instead of trying to texture (UVMap) the curve itself.

I don’t know if I can use a UVMap with a Bezier/NURBS shape. Maybe I just can’t.

Any advice could be useful.

In the Texture Space panel of the Object Data pane in the properties editor there is a checkbox “Use UV for mapping”. Activate this.

Nurbs surfaces have implicit UVs - they do not appear in the UV editor and cannot be edited directly. The full length of the U&V curves are mapped from 0 to 1 of the texture space.

If that doesn’t suit your purposes you can deactivate UVs and use world or object coordinates or use a null to provide coordinates.

I don’t know if I can use a UVMap with a Bezier/NURBS shape. Maybe I just can’t.

Any advice could be useful.

I think the best thing to help you is to tell you that this is not because of the lack of people who are competent to help you, this is because the question is unclear. Try reading it yourself - would you yourself understand what it is that you are asking if you were unfamiliar with your situation? ‘… how can I select part of a texture removing unwanted parts…’ The answer is you cannot select part of a texture removing unwanted parts. In fact there are no selection tools for parts of textures in Blender. The question makes no sense. Here, this is what ‘selecting a part of a texture’ means:

It’s completely unclear, what you want to achieve.

Ok, I’ll try: I’d like to create a stencil of a pic using Bezier/NURBS curves in place of a selection, and yes, exactly your selection concept.

P.S.: Doing as Jandress proposed, I had an half result: I can see the texture on a Bezier circle (I shaped it in 2D and then enabled UV), but the result is not really neat.
I attach a shot: Your best bet if you are using a 2d curve is object coordinates. you can then shape your circle by moving/adding/deleting points without disturbing the texture. The texture will be visible in the viewport in material mode. 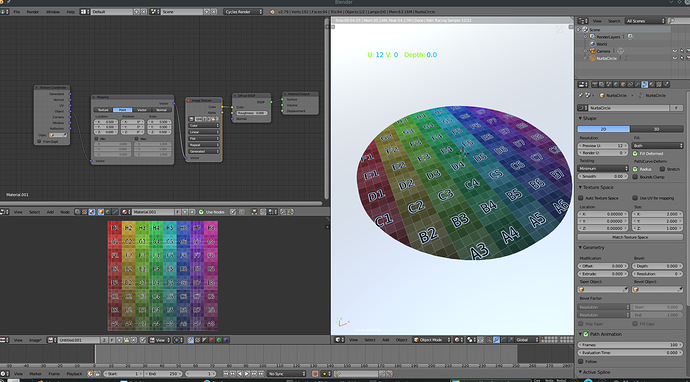 I cannot think of any situation where someone would want to do something like this. Could you tell more about your situation here? What is this for?

@Jandress: I see you’re using Cycles for this. Can you do the same with BI, and eventually without nodes?
@MartinZ: I’m exploring the endless Blender abilities.

@Jandress: I see you’re using Cycles for this. Can you do the same with BI, and eventually without nodes?

Thanks a lot, it’s exactly what I was looking for!
Bless you.

Do you know where “Use UV for mapping” has gone in Blender 2.9?