Arctic alive - a simulator with elements of survival horror. The action takes place in Siberia on the research station “Arctic”. There was something in what is necessary to understand the player. The world is open for exploration. Throughout the company, the player must take care of themselves, maintain health, provide food, adapt to the environment.
Frost in the -50 ° C can be more dangerous than bears! 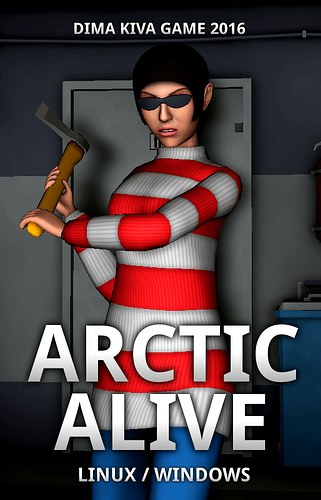 Impressive. It is hard to imagine how long it took to develop.
Five points.

Wow! Congradulations with launch. I should get this game and try someday!

Gave it a try, it’s quite the impressive game, especially by Blender’s standards.
Everything is very well done, the visuals, the animations, sound, and the intricate motives system reminiscent to The Sims was a nice touch. Evident that a lot of work went into it!

A bug I found was when eating/drinking, the item would sometimes disappear from my inventory but not increase my meter. Think its caused by the choppy framerate, as sometimes equipping something or performing an action is cut short. (A bug with the newer versions of Blender)
Speaking of which, the framerate it stuck at about 15Fps, which is weird as my machine should be more than capable of running the game smoothly…

I suppose one final complaint would be the autosaving in the basement area, where you quickly freeze to death. (Which apparently 6 Deg Celsius is enough to kill you, that’s T-Shirt Weather!) Had it save seconds before dying, and didn’t have time to make it back, forcing me to have to restart.

Gonna leave a review on Steam once I put in a couple more hours, good luck with the sales!

If the game sags below 30 fps, the glitches are inevitable.

Damn bro !!! please Optimize this Game properly please man this is known to
be one of the best blender Games out there !!! i am Looking forward to downloading this Game
please optimize it Properly !!! Iam sure that it has been well optimized.

What 2d filters are you using?

Are you using a dynamic lighting manager?

What are you using to gather inputs?

When people play your game what is the highest %?

Is your actor all 1 material?

Are you using a atlas?

I would be happy to look it over and see if I can chew some of the fat for you.

What 2d filters are you using?

I use one filter (Motion blur) when the character dizzy.

Are you using a dynamic lighting manager?

What are you using to gather inputs?

When people play your game what is the highest %?

Is your actor all 1 material?

When people play your game what is the highest %?
Do not understand.

Can you add a option for people to.see the profiler in game, to see what is taking the longest time, rasterizer , animations, logic etc.

From my experience animations can take up a ton, and sometimes I have to manage the heck out of them.

Disable one of the monitors. It should help.

People on steam are arse ooles, they all should make a game before commenting? $3.99 and they well turn into nazi lovers.

People on steam are arse ooles, they all should make a game before commenting? $3.99 and they well turn into nazi lovers.

Yes… They pay big monies for waste games where you pointlessly shoot people and say how those games are fun. And than they buy a cheap game with even story in it and dislike it…
P.S. It is not aimed at everybody, but lot’s of people act like this.

At least most the reviews for this game are positive. And many who dislike it point out the great potential of the game.

And some of the critics seem to be legitimate. Which should be a stimulation for some updates. (Tort do not get me wrong, without having played it yet, this seems like a really great game and it is far better than everything i have created so far. And i will definitely play it someday).

…And yeah some are just assholes.

But i think the main problem lies within the voting system of steam. Where you can only like or dislike a game. so there is only black and white and nothing in between.

You hold the record for most positive rating on Steam for a Blender game.

All the reviews for Blender games go the same; ‘Buggy’ and ‘bad performance’. The complaints about the translation job are petty. I’d say you did a pretty good job.

May I remind you guys that Yo Frankie had some very “Blender” bugs. Walk into a tree stump too hard and you’re shot 50’ into the air.

Disable one of the monitors. It should help.

Keep going Tort! That is the right way…make games and sell them on Steam. I’m certain every new game you make will be better than others…and eventually some day you will make a game that will be received very well and you will be able to expand your studio. That is the story of maybe 99% of all indie game companies.

Bought the game ; ) Haven’t completed it yet, but it’s been really entertaining thus far ^ ^
Best of luck with future projects!