I know this has been covered before but it is still not working for me.

I have attached a file showing 3 atempts 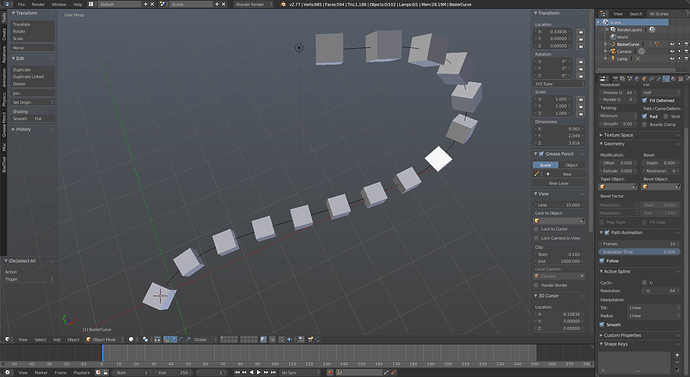 With the curve modifier, the angle and position of the object is critical, so you may need to edit it to get it aligned as you need to. Good video to watch: https://www.youtube.com/watch?v=7T6Ed2SRwqA

With the curve modifier, the angle and position of the object is critical, so you may need to edit it to get it aligned as you need to. Good video to watch: https://www.youtube.com/watch?v=7T6Ed2SRwqA

He has a problem with the curve modifier deforming the mesh, not how to get it to work.

I guess, i remember the therm “Curve Deform modifier”…
In any case “simple but efficient method of deforming a mesh along a curve object” is what rtfm says so that this shouldn’t be a surprise that Curve modifier deforms something along ;).
Cheat this by increasing complexity.

Thanks for all the info. Ognjen has an interesting solution using dupli-frames with no modifiers. As to the youtube video it is helpful, I have seen it before but happy to look again. I just find it curious that when you use a curve modifier with the array it does not seem to make much difference in terms of result, whether you use fit curve, fit length or fit count. It makes me wonder what good is fit curve. If it worked as expected (painlessly repeating an array along the path of a curve) it would be great, it just doesn’t.

Thanks again to all, I appreciate your time

As Eppo says, your scale is wrong. On your ‘fit to curve’ example, ctrl+a set scale, then set your offset to 1.0 exactly. You will see that it fits the curve perfectly. Now, the reason it isn’t fitting it perfectly with an offset of 1.5 is that basically, you have shifted the goalposts as it were. Set the offset to 1.540 and it does fit the curve exactly. It depends on if you want it to fit the curve exactly, or you want the offset to be 1.5, you can’t have both, unless you alter the length of your curve instead.

YESSSSSS!!! Guys if someone is still having this problem after these replies as I had…I finally found a solution and am very excited to share it …

You are a life saver. I’ve been struggling for 3 days in a row for this option.

I was looking for a solution, and your answer was the best! Thanks!

Thank you!!! My issue required the mean tilt in those settings, getting the correct rotation of array object!

Make sure
scale is applied

This fixed my problem. Thanks a lot.