I’m trying to create a domino effect using the rigid body modifier. i wanted to make it look interesting so i intended to use a curve path to line up my dominoes and thn make them follow it with an array and a curve modifier. after that i could break them all apart and restore the origins ready for the simulation.

however the curve modifier stretches or squashes the dominoes as they follow the curve, even on only minor bends they are slightly effected.

the only other way i have found is using the duplication tab in the object panel. unfortunately while this method does not deform. it does not allow for the breaking apart of the model as it just duplicates the original and in edit mode the original is the only on that appears.

i was wandering is there a way to stop the curve modifier from deforming its target and instead just make it follow the curve or if there is another solution?

There are two ways I could think of making dominoes in a row using curves:

In the first variant you could parent single domino to the curve and use Follow Path option.
Then bake the animation and use Dupliframes as way to arrange the dominoes.

In the second variant - create custom font object as domino and replace the letter with in text object.
Then use Text on Curve to arrange the domino letter on your curve.

The topic is quite interesting.
I made a tutorial which is pretty detailed so I opened a Tutorial thread with link to it: 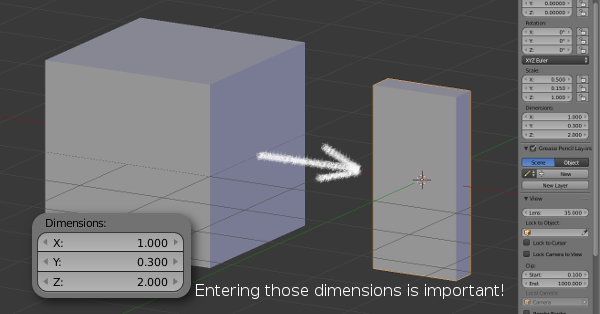 This tutorial is dedicated to everyone who likes to play with dominoes with Blender. Here I describe two ways to create domino line-up using curve without distorting the domino tiles (i.e. no Array modifier). The tutorial is written so be patient....

Problems creating a domino with the "rigid body"

Nice solution JA12!
I will add a link to the video.