Articulating a watchband to make it connect.

I am modeling a wristwatch, it’s the very first thing I’ve done in blender, and I know that I’m going to need to bend the watch band to make it connect with the other one to make the O shape, like someone is wearing it.

What techniques would you recommend I use to do this?

My plan is to assemble the band in pieces using the mirror tool, and then try to move/connect everything together once that’s done.

On youtube, I’ve watched people modeling watches but it is flat and the bands aren’t connected.

The watch band is metal and not cloth.

Here is a screenshot of my project.

Not bad for a first-time blender user with absolutely no prior experience in 3D modeling, eh? 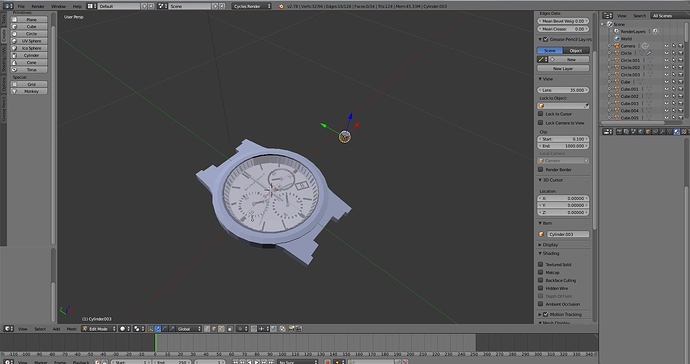 I’d suggest looking up the subject of modeling “tank treads” or “caterpillar treads” and their articulation. May not be exactly the same, but the idea of how their hinged isn’t too far off from what’s done in metal link watch bands. At least it seems like it’d make for a viable modeling approach. Little bit of array, and maybe paths and/or rigging.

Simple curve and array should do, the curve will deform the pieces to make them fit so a better way might be an arrayed plane on a curve with duplifaces (the plane won’t show up in the render so don’t worry about that)