Artwork for point-and-click-adventure 'No Place For Traitors'

this is some charakter-design I have been doing for a point-and-click-adventure currently being developed (serious-monk.com). We are working on the prototype of the adventure for funding. These are the four characters which will be part of the demo. The gamesetting is a medieval (12th century) monastery, the stroy consists of murder, betrayal and mistery (nothing more will be revealed atm :eyebrowlift: ).

Antonius, prior of the Monastery and main character

All graphics are being done with blender, the engine we use is Unity. For the interested, on our page, we blog about the creation process, the difficulties and techniques we use during development. 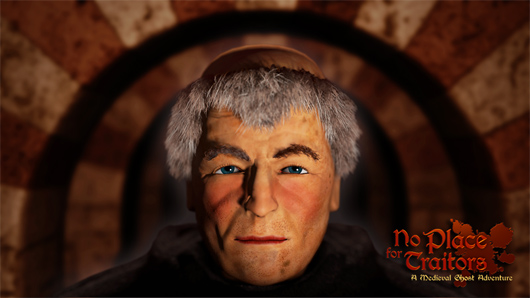 Fabulous. Not enough adventure games being made these days. I look forward to seeing some screens of the scenery.

Really great stuff. I may need to pick your brain about the monk character development, as I’m working on a project with similar characters as well!

thanks! Let’s see if this point and click-Adventure works out. I responded to your question on the blog, but for anyones information: The final adventure will be bilingual in english and german, the prototype probably will be german concerning the voice-acting, but bilingual in the subtitles…

Thanks for the comments so far!