I’ve worked on Arya for over three months, but I decided I needed to start posting this around, because I really like how it turned out. I’m not finished with her, but I’m a bit busy with other work at the moment, so this is the final render…for now.

I realise I’ve been gone an insanely long time from BlenderArtists (not that I was missed in any way, haha!), about two years, and I’d been doing some learning and some soul-searching and this is a side-result of that.

I created Arya with a specific idea in mind. I wanted to break a few stereotypes that TV, movies and the gaming industry have brought upon us, which are, in my opinion:

This is mostly seen in TV shows and less in video games. We’re used to the movies, because it is (mostly) the same actors playing different roles. Of course, it is a completely different idea as soon as you get out of Hollywood and move into World Cinema (excluding Indian cinema, which I’m totally familiar with ;)) and Indie movies, but I digress.

I really wanted to break that stereotype, and what better way than to portray the complete opposite? A woman with more masculine features, but one who is decidedly and obviously female? In the end, I did that.

As for modeling, it was straightforward. I went with the head, then the eyes, then the body and then the underclothes and the armour. I finished off with the sword and the base, and posed her. I faced a bit of difficulty with the hands and fingers.

I did UV Unwrapping and texturing as soon as I was done with a model. Shading came after all the modeling, and I went on a total spree.

Lighting was straightforward, too, with two point lighting and a HDRi from SIBL to provide additional colour. I experimented with Daylight, but I wasn’t very successful. It was the soft overcast light I was aiming for, but I wasn’t satisfied with the output.

It was a pretty basic compositing setup, too, with Glare and some colour correction, and contrast adjustment. The background is made via compositing, too. I can post the node setup if anyone wants to see it.

Your thoughts are most welcome!

I would love to hear what you think about it, ideation or technically, and since this is a temporarily finished model, suggestions are revered! 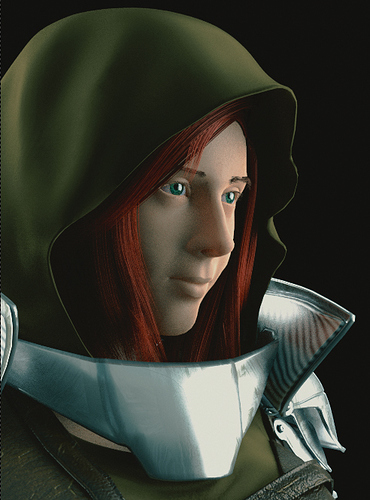 If you added realistic skin texturing, and she would be perfect! Great Work!

If you added realistic skin texturing, and she would be perfect! Great Work!

That’s something I can work around with right away! I’ll update asap. Thank you for pointing it out!

Very beautiful. I love the sword and the close up of her face is very beautiful also. The armor is actually really fitting in a great way. It’s strong, but not masculine like some armor on women can be.

My suggestion for her face would to add a bit more red tone in her eyebrows…unless you wanted them to be that brown color. That’s my only suggestion but overall, a beautiful render :yes:

Could you one day do a whole profile of her(front, back and side view)? I would love to see her 360. This is what I hope to do one day in the future

Thank you for the beautiful render

I’ll work on her eyebrows as well, and post a render update in the coming week or so.

This is really nice! like gmmonllor said, it would be cool to see some more views. Also, for the main picture, it would be nice if you had the camera a little closer, so we can see it better.

for the main picture, it would be nice if you had the camera a little closer, so we can see it better.

I think you’ll find the picture resolution high enough if you open it in a new tab.

I shall make a turntable if possible on my crappy laptop.

You are very welcome Niranjan. I also loved reading your description about how you steered away from stereotypes. I’d give you a high five but…I’ll knock down my monitor screen. Again, you did an amazing job on this render.

love this work and the SWORD style!
great!