The Asset Management is available !!! 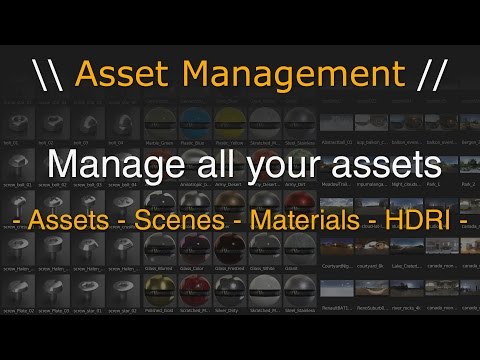 "Update of the Asset Management". The new version 2.2.2 is compatible Blender 2.79. The update is free for the previous customer and the next updates will be free as well ;). WHAT'S NEW on the 2.2.2? Custom file Path! Custom import of Assets and...

So what is Asset Management ?

It’s an Addon to store assets, it can be different types of assets.

There is a preview video in french, I will make a version in english when the Asset Manager will be released.

There is some gifs and pictures to see what you can do right now with the Addon.

There is an example on how to do this.

We are working on an automatic solution for this, but it’s possible and it works fine as you can see on the pictures.

With The Asset Manager you can add everything you want, and use custom icons or use the Addon render Thumbnail to make different types of thumbnails.

All of this is still in Wip, we are working hardly to finish the addon as soon as possible with the features you need for the V1 and we have a lot of ideas for the V2 as well ^^

Any ballpark figures for how much this is going to cost when released?

Not yet, we have our idea but you can tell us what price you think is suited

Not yet, we have our idea but you can tell us what price you think is suited

Hah! I can tell you what I can afford, which isn´t much, unfortunately. Anything around 5-10 euros is perfectly reasonable to me, but if it works as nicely as it looks, it´s certainly worth more…

Looking interesting and yes, a video in English would be more informative for me personally

Very impressive work. Will it be possible to preview different file formats from folders? (.obj,.3ds,etc.)

No, it’s a different addon, but we added the preview in hardops.

Very impressive work. Will it be possible to preview different file formats from folders? (.obj,.3ds,etc.)

What’s the difference between this and the “create” menu?

In the create menu you cannot add any object of your scene or assets with multi objects.

Ah okay, cool. Looking forward to the release of this, can’t wait to try it with Hard Ops.

This looks incredible! What an essential tool for Blender.

Please keep this affordable when releasing it, like Hard Ops, so people will actually use it. Secondly sell it on gumroad vs. the blendermarket.

When you first sell it can you give a discount for a limited time? I like to feel special as an early adopter

Shut up and take my money!!!

We added the posisbility to make an opengl rendering with camera placement !

This is the first implementation, we will check this for bug and improvement, like a button to hide the backgrounf for example.
I think the opengl render is nice and usefull, it’s fast and you can choose the angle of the camera for personalised thumbnails.

Ohh I need it nice work wen it will be available

Wow. I’m impressed at how much you guys have got going.

How asset manager handles materials, import asset with materials and scene already have same materials than imported object. Does it do material.001 if same name material already exists on the scene ? When using material library that is more than annoying.