I found a way to make this challenge interesting to me by using it as an opportunity to create a character I had in mind for some years now: 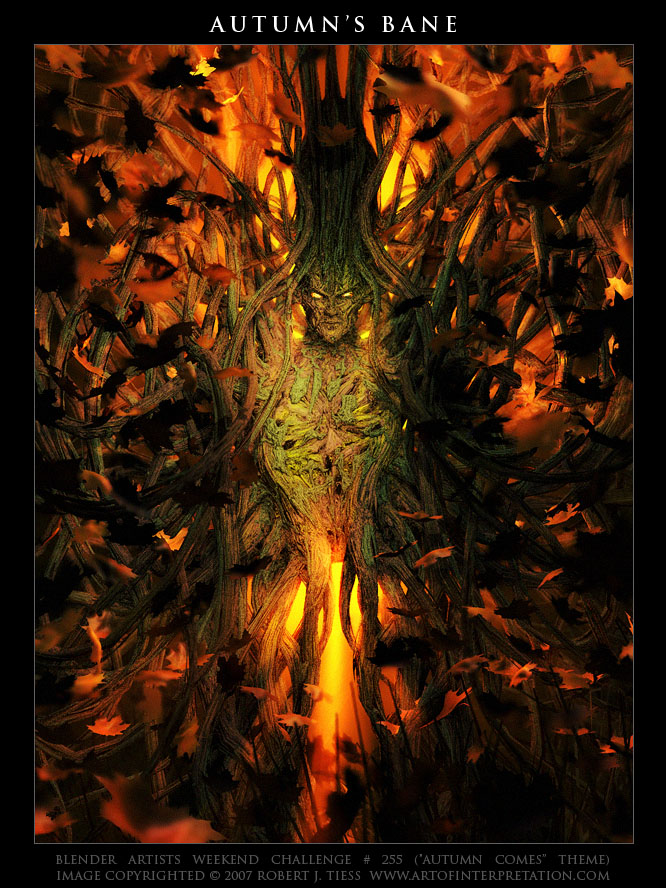 Cursed to dwell at the edge of the enchanted forest, forever apart from his one true love, Blossom, Autumn channels his sadness and wrath into the wind each year.

You make me sick, RobertT.

Excellent job.
How do you do all the texturing only in Blender?

Procedurals on a detailed mesh, to answer you question. The scene is near 2 million verts.

In other words, painfully good.

I’m wondering how you did the tendril things. They appear to be joined to the main character mesh, but converting curves to mesh and then joining them manually would be quite painstaking.

Also, did you animate the leaves --> vector blur?

How many hours did this take? It amazes me that you did this in a weekend, and yet it’s one of my favourite pieces by you.

Man, I’d kill to look at just one of your blend files!

(And sorry for all the questions :p)

Right, but how the heck do you get such vivid textures … over a weekend?

There is no way you manually modeled all of that.
Do you reveal wireframes? (I just don’t get how you can make something 3D look so 2D)

It would be majorly appreciated to understand your techniques and methodology. Could you consider creating a “behind the mind of RobertT”?

Sick! This is deff one of my favs of yours!

Oh what I would give to watch you create one of your many masterpieces! :yes:

blenditall: Thanks! Probably around 15 hours or so. All tendrils were extruded from the main mesh. It’s all one big mesh with the exception of the leaves. Additional details were then added on to the mesh afterwards. For some slight motion blur simulating I used low sample defocusing

I know I could have used vector blur easily by parenting all leaves to an empty, keying its movement between frames, but from this vantage point that would have produced too much of a zoom type blur I think, so I went this route.

Aquiva: To get this kind of texturing over a weekend took years of course for me

which is to say it took a lot of practice, failure, joys, frustrations, trying, experimentations, and trying to remember what worked best from project to project. It’s an ongoing learning process for me. In technical terms, for this project I used the mirror modifier for the character and then applied the modifier once modeling was done. This was after the appendages and additional mesh details were added. Afterwards, proportional editing was used to introduce more variety into the scene. In terms of illumination, which I try to design with a view to complementing and accentuating my materials, I used a variety of lights, one main shadow buffered light for frontally projected shadows as well as an additional omni key lamp. Behind the scene, pointing to the camera, are several vertically aligned halo shadow buffered lamps that produce volumetric lighting (and long render times!), and they are there for atmospheric and emotional intensity for the character. In terms of artistic final product, it’s very helpful to have strong and vivid ideas going into a project. Once all that is in place (and it can take a while), I tend to feel better about the potential success of a project and being able to go from imagination to render with Blender

superkoop: Wow, thanks! =) I imagine it could be boring or frantic for someone watching these things come together, especially when I get to the near-infinite tweak/re-render phase. I might make a blending video some day just for fun.

well, there goes my chance of winning the WC

ah, much better. i dont know why. this feels much more considered than your other latest work. good stuff.

I might make a blending video some day just for fun.

Awesomeness!
I hope you do, I would learn so much.

Hey RobertT,
How would it look if a couple of the leaves crossed over the white border of the image and over the frame? (- Just a thought!)
Brilliant pic. - I usually considered autumn more a sleepy time than angry. He looks ticked off!

RobertT, your images inspire me more and more… I really like the sort of flowing, dynamic elements you put into your pieces. Keep up the great work!

Great work as ever…Your work has always inspired me…

I like it. The colors are great and the composition works, even though this is pretty typical piece for you. Your modeling is getting better by every scene you do, I especially love the face and the expression it has. Solid four stars from me.

Excellent again sir. Nothing else to add.

Yeah, this one is fantastic…Absolutely fantastic…
5*s

More greatness from robertT,
I do like this one, how can you not, after all, it’s a tried & tested method that almost always gains instant success
Start with a head, then explode it into a glorious, elaborate labyrinth of beautifully crafted shapes, texture it with sublime perfection, finishing with exquisite subtle shades & hues.
All in under a weekend!
I think you’ve really mastered this style.
On a more serious note, did you use the align/displace script for the leaves?
Or do you still use it?
Great work again, don’t take what i said too seriously, you rock!
m.a.

You have this remarkable style… very detailed and “fuzzy” and very symmetrical. I like it! And you make them so fast! At least you put them on blender artist forum almost every day

Amazing once again. It would be really awesome if you video tape yourself in how you go about on these projects. Great Job.