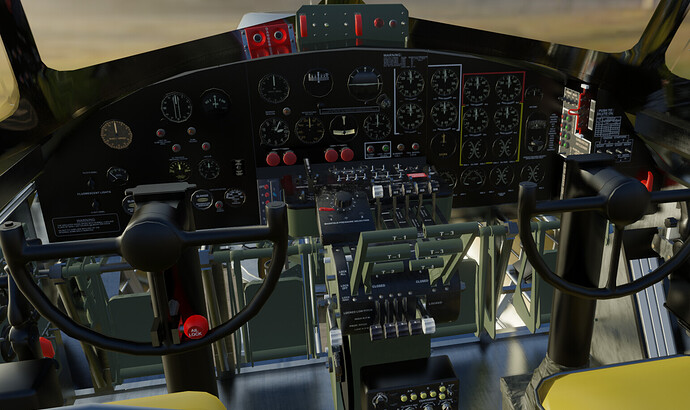 I’ve been working on a game res model of a late war B-17G, fully modeled inside and out. I’m endeavoring to make the model as accurate as possible so speed is not the goal. Besides modeling and texturing, research takes some time.

This will look period to c1945 so there won’t be a lot of grunge/dirt/distress. More like service ready than warbird.

Here’s the current state of the flight deck which is not quite finished yet, but that’s why it’s a WIP.

what have you done yet ?
can you show some renders 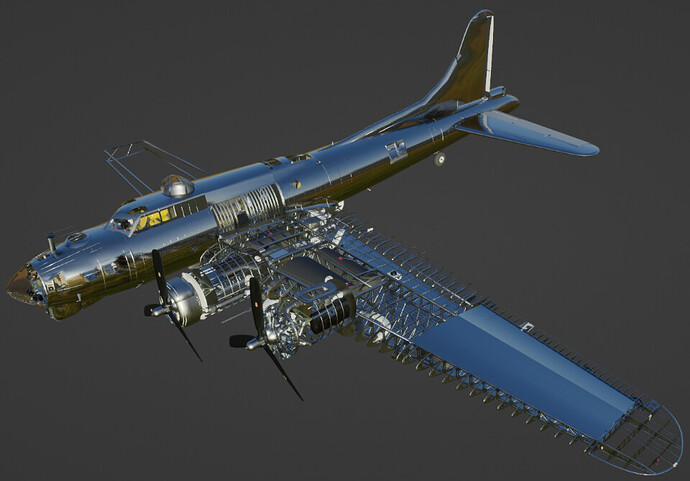 Apparently I can only upload one image per post, which is odd because that’s the primary function of this site? I have most of the fuselage and wing structure done, and a good portion of the systems.

did you do the cockpit’s instruments with meshes or only UV mapped? 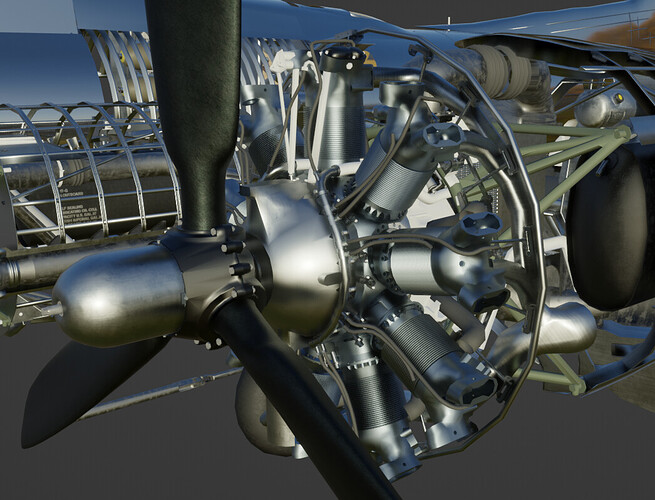 All instruments are modeled and are fully functional. Except for the Oxygen Blinker which I have to go back and do. It was one of the first gages I did several years ago and I wasn’t sure exactly how it functioned.

I am working on the engine to be fully functional inside and out. Since there are no remaining drawings for the engine it’s been a challenge. Still much to do on the engine. I have a working rig for the pistons, rods, and crankshaft, but it needs adjusting and the rest of the internals and accessories.

You can upload multiple images when your Discourse trust level increases:

The user trust system is a fundamental cornerstone of Discourse. Trust levels are a way of…

Current progress on MLG assembly. I won’t be able to complete and rig until I have the wing in the right position since it attaches to the wing and stows in the engine nacelle.

Still have some details I want to add and I’m not sure what I want to do for the tire. Some tires had treads, some didn’t. I haven’t spent time researching what the uses were. 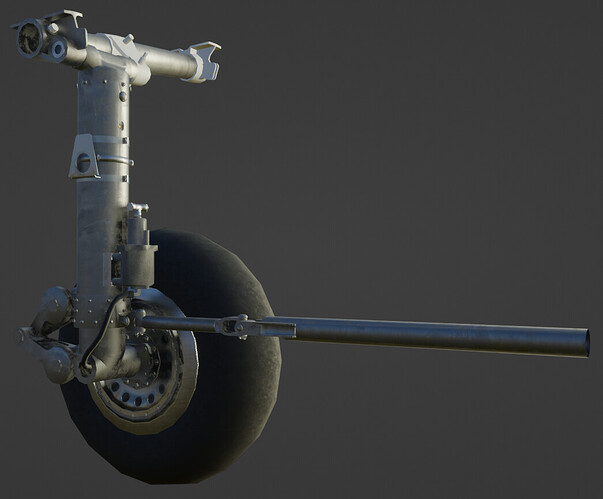 Quick look at the Hydraulic Power Unit and hand controller for the Sperry Ball Turret. 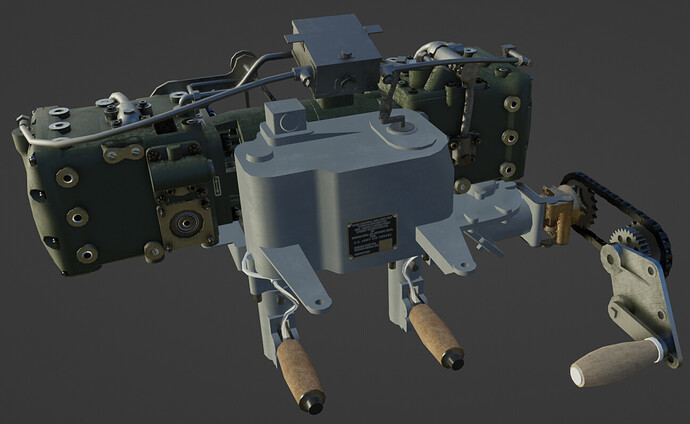 The Ball Turret isn’t finished yet. Still a lot of work to complete on the casing parts. 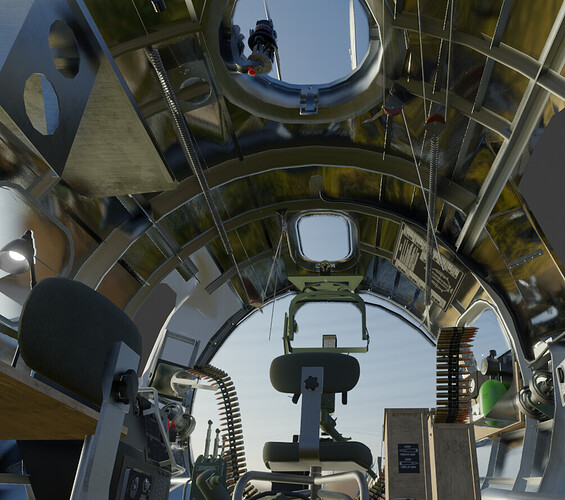 Quick Evee shot showing Bombardier and Navigator stations. Still a fair bit of work to do. It’s taken some time to not just model but research to make sure I get all the equipment right.

Unskilled you say? Seems that you definitely have some skillz! Splendid work so far! The only thing that catches my eye would be the 50. cal ammo links. Shouldn’t the bullets be closer together? See below: 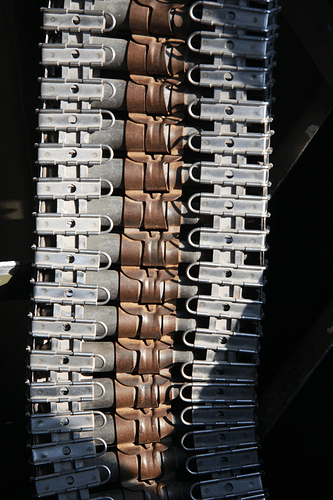 I took this picture at an airshow back around 2008-9 that had a B-17. Not sure which model. Notice how the bullets are actually guided by a tray system which guarantees that they will feed without error (in theory).
Anyway, hope this helps.

Unskilled you say? Seems that you definitely have some skillz!

Ha thanks! It’s what my former employer called me when I was told I was being laid off. They didn’t have the cajones to look me in the eye and tell me they didn’t want to continue paying me.

Thanks for the reference. I made the links a few years ago and finally did an initial test the other day to test how they would chain on a curve. I wanted to pop them in to see if it worked at all, and see how the front stations are filling out. There’s quite a bit of equipment up here and not a lot of room to move around.

There is definitely an ammunition belt which I have yet to make. The .50 cals, like every part, need to be right especially because there are so many. If I do one wrong, it’s wrong 12 other times. 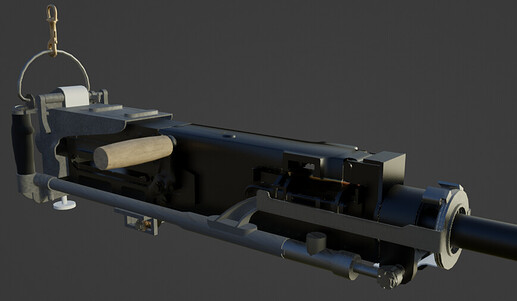 Shown with E-11 adapter, which is used in cheek and waist gunner positions. The Shock Cord and snap hook are configs for the cheek gun installations. I have to prepare configs for the charging handle to be left or right, solenoid charging, and electric trigger operation. 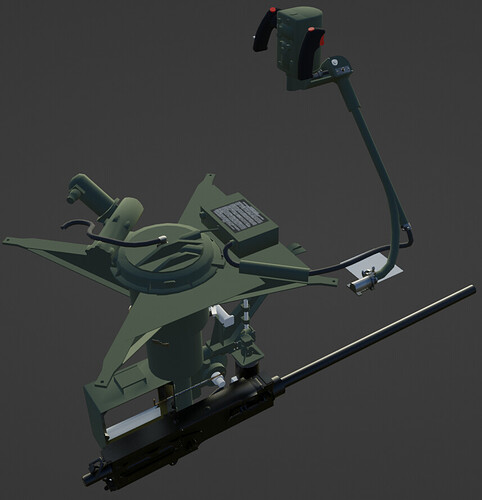 A fair bit of work done but quite a bit left to do. I had to put the turrets on pause until I got the M2 model solidified.

when considering a 2010 PS3 era GranTurismo 5 ingame playable mesh at LOD0 came in at around 500k.

Otherwise nonetheless kudos! for sticking with it over I assume a number of years but all the same FUN filled ones

I turned everything on the other day just to see the scene stats. 1,491,155 triangles, 9,523 objects. Yes I started on this about seven years ago. Finding accurate references has been challenging because there aren’t a lot of war time photos which depict the interiors and warbirds aren’t accurate.

Not sure I’d do another bomber to this level? LOL But I do want to do an escort fighter and a BF-109. Thank you for the compliment. It has been an enjoyable project. 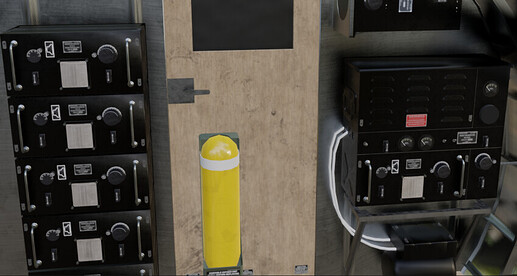 Another detailed work! My favorite!
It’s the effort, anyone can see it. I enjoy seeing the progress. I’ll admire it now.

never been able to find good references dwg for these wwii planes !

the amount of details is amazing here
are you using proxy or all in same file ?

@Minamookevlar
Thank you so much!

@RickyBlender
I’m using AirCorpsLibrary for drawings. They have quite a few airframes in their database.
Currently everything is in one file. 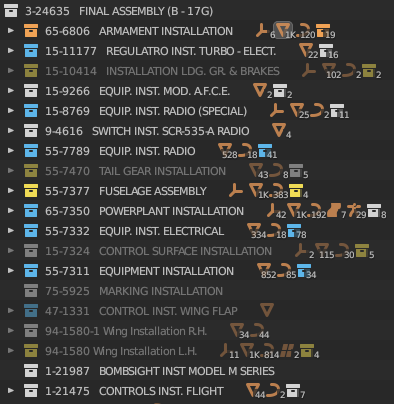 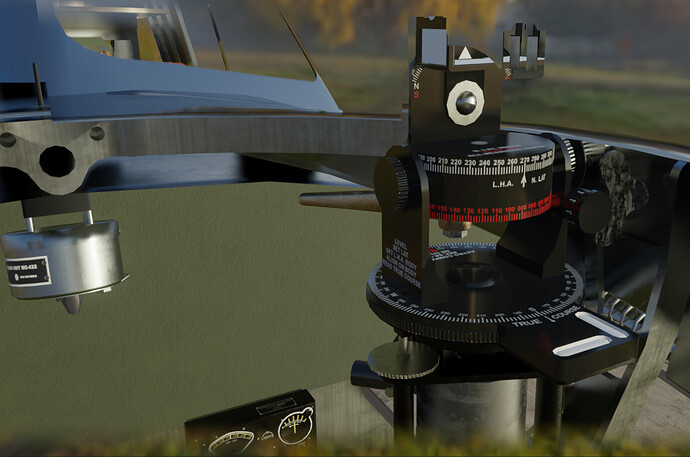 Quick view from the Astrodome featuring the Astrocompass MkII, looking back toward the pilot’s windshield. The Astrocompass was fun to model as I have one I could measure. Put in a game engine this should actually be usable.

just curious do you have the radio model ?

Do you mean the BC-348 receiver? I have started a model for it, yes. There’s quite a bit of equipment in the radio compartment, and the radio systems are pretty extensive. So I have a lot of work to do. I don’t plan on modeling the internals. Would be cool but I have to make the rest of the aircraft first. 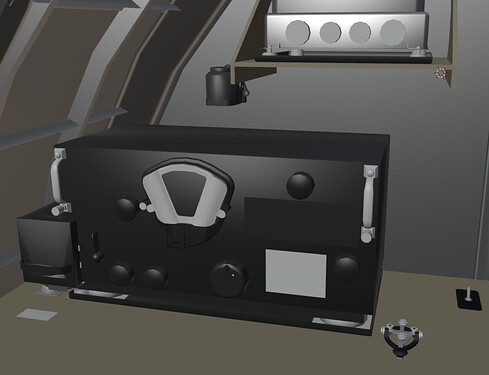 first image on my thread for WWII

can’t wait to see how you do your model