This was supposed to be my entry for blenderguru’s last competition but i got too frustrated and abandoned it:P Came back to it now and here it is:) Any comments welcome:) 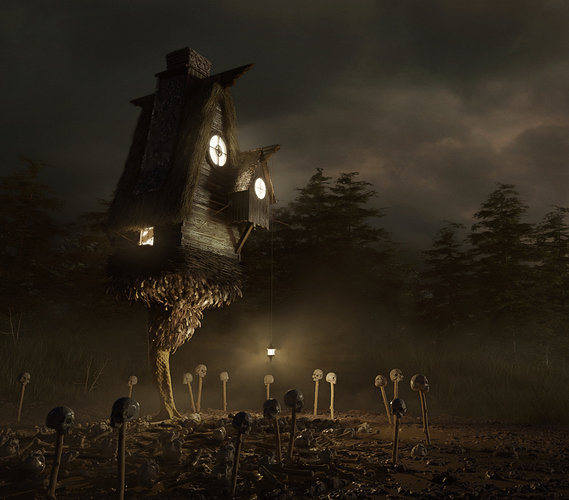 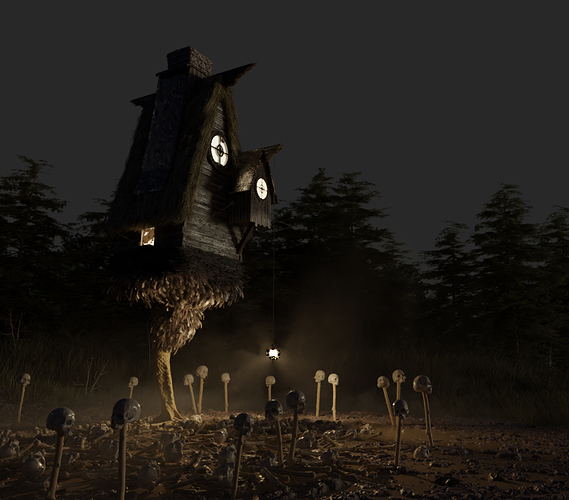 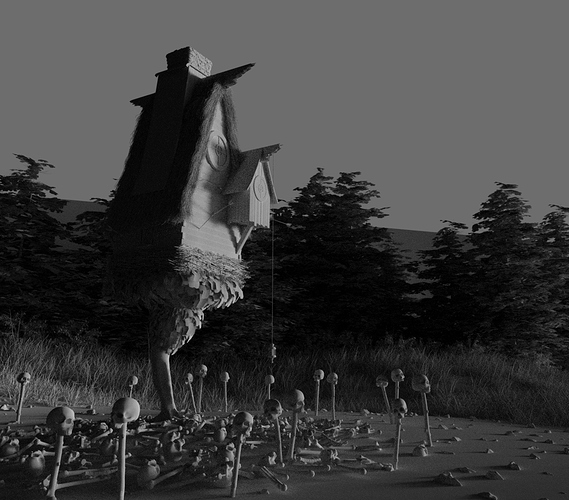 This is so charming. Everything about it is awesome. Especially because its not another ‘skill’ render. There’s a story to be told.

According to Russian fairy tales, I think it is supposed to have two legs.

@Nicholas_A Back in Poland I’ve been always told the version of the story with one chicken leg when I was a kid. There’s probably as many different versions as slavic countries:D

TSF, well done!! great mood and story telling effect. I appreciate the work, and your sharing.
There is an excellent reading of a tale in a book called, “Shadow and Evil in Fairy Tales” by Marie-Louise von Franz, page 192, entitled “Vasilisa the Beautiful.” Not only is a vivid description of the house but the setting and introduces the Baba Yaga (dual aspect earth mother figure of pagan origins in Eastern Europe) but because of the nature of the book, it then “unpacks” the motifs and demonstrates the core teachings and why the story has persisted for thousands of years, it speaks to the ‘psyche,’ and it’s deep roots.
I encourage your take on the image, and only offer comments to deepen the understanding, not to challenge your interpretation. The story is a good read and I have given this book and recommendation many times across the years as it clearly speak to me. Thank you for sharing your version and vision.

Nicholas, Hello… I welcome any others thoughts, but, according to my sources in Jungian fairytale origins, the Baba Yaga house motif was a transformation riff on the ‘odd’ structures built in the woods by early nomadic hunters. Struggling to survive, they might encounter an (un)fortunate large herd, killing as many as they could, because you don’t know where your next meal may be. Then the challenge is to process and store the excess for later retrieval. They would select one(1), two(2), three(3), four(4) trees of proper distance to each other then build a store house up off the ground to store the meat in the winter, using the excess trees clear cut around it for construction. The building would have no windows or doors as it was set up high above scavenging animals, bears, wolfs, etc., and could not be easily scaled to get to the roof, since the surrounding trees were gone and the shack was raised. The appearance of the four ‘legs’ with their bare roots intact (chicken feet) gave the appearance of the house on chicken legs when discovered by more village folk, often well after the construction as the original builders my never have been able to return, given the vagaries of nomadic life. You could not tell which way the house was facing, (no doors/windows) giving it the aspect of spinning. It appeared ‘odd’ set up high off the ground, and bones from the slaughter would be left scattered all about, and skulls posted on sticks to ward off vandals. A very ominous sight and setting, dark and appearing uninhabited, just ‘ripe’ for story telling and improvisation.
This is thought to be one of the sources for the Baba Yaga house of storied fame, I am sure there are others.
I offered this only as an amplification, and not to critique the visual created.