All textures are from the 3D Total texture collection v12&13. 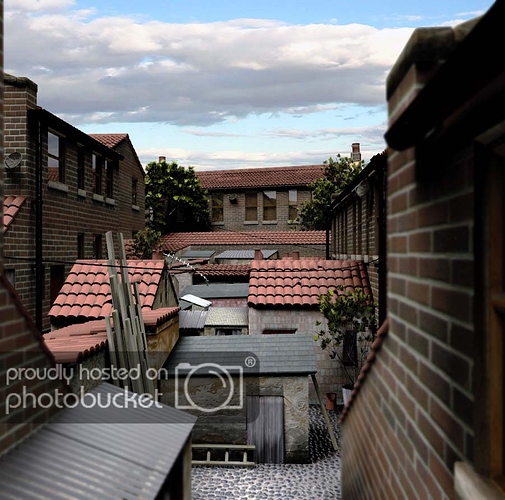 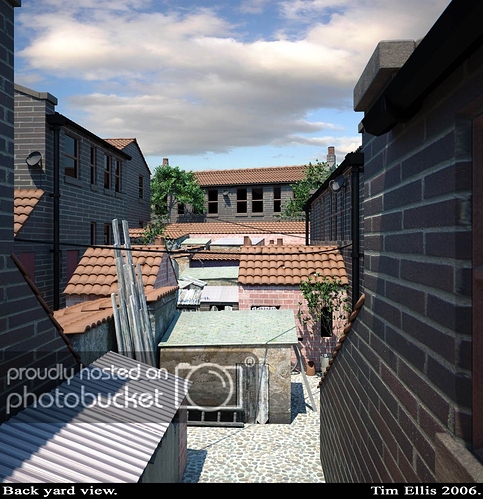 The brick texture has been tweaked as the bricks are too wide on some walls. An update will follow soon.

The 1st one…, the blender render…, amazing. The second one…, I’d say it needs work. It just doesn’t seem…, as “real”. I know the textures need adjusting. But the lighting is different.

I agree, I think the first one is far more realistic. The lighting is the biggest difference. But incredible job! amazing work! I love it!!

Amazing. The first image seems better to me, although the buildings look a bit dark against the sky. However, the second image looks overlit.

Both renders look good! There is big mood difference in the pictures.

The the sun in the first scene is propably hidden by clouds, this makes the the light a bit diffuse and the shadows soft. This pic is nice, I like it.

In the second pic, the sun is brightly shining. In real, if you look at shadows they are sharp and maybe darker. The atmosphere is joyful, if you added some props (eg. bikes, children paintings and toys) it would be great. Just like summer photo of a nice backyard. But why are the far windows black? I think that clear sky without clouds would be better.

Very good work. I’d agree with all the posts that the first one needs to be your final. I like the brick texture, although it is too big. Great job.

How could you do this to me, it was really hard to find anything to crit!

.
On the very first view, the windows of the top floor of the left house look, as there is no glass in and nothing behind them. this is mostly, because they are too clean, adding some grey value and maybe a little noise would fix it. Not that hard, since the picture is nearly photo realistic.

This is some of the best work ive seen. Great job… Really its unbelievable. First thought was why did someone post a picture and try to pass it off as a render

This is awesome! I gave it a 5-star rating!

I like the first one the best, because of the lighting.

Something I would like to see… …A dark overcast, cloudy sky (minutes before a storm), especially very dark in the far background would be very moody. Perhaps the foreground bright and immediate are light, like in the first picture. I am not telling you what should be done. What you have is perfect. I just want to see more of this project.

This latest render really gives this another feel. Cool.