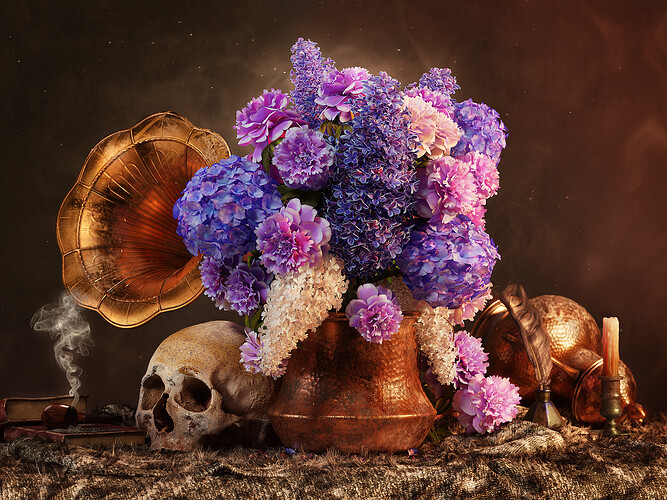 The flowers in this piece were purchased as part of a commission I did last year, they didn’t end up being used for that project but I wanted to do something interesting and unusual with them. They, along with the skull (from Geoffrey Marchal) had to be extensively re-textured to fit the theme.

I looked at classical painters such as Rachel Ruysch and Ambrosius Bosschaert for the initial concept, before also looking at contemporary artists like Hannes Hummel. My work still has some way to go before it matches Hummel’s for quality, but I think I also have my own hyper-realistic style, as opposed to Hummel’s photo-real style. Achieving an actual photo-real finish is something I can’t put my finger on in Blender, but I strive to get there eventually.

I normally focus heavily on lighting, it’s something I enjoy and really gives even the most basic of subjects a lot of substance. This one went through an unusually high number of setups, 10 or more before I settled. I wanted to keep it fairly dark and high contrast. However unlike old painters, we have to consider how this will be viewed on different displays with different colour calibration. So this image is lighter than I’d otherwise want it to be, not an issue I imagine the old painters ever had to consider haha.

Wow, excellent atmosphere. How many lights were used in this scene? 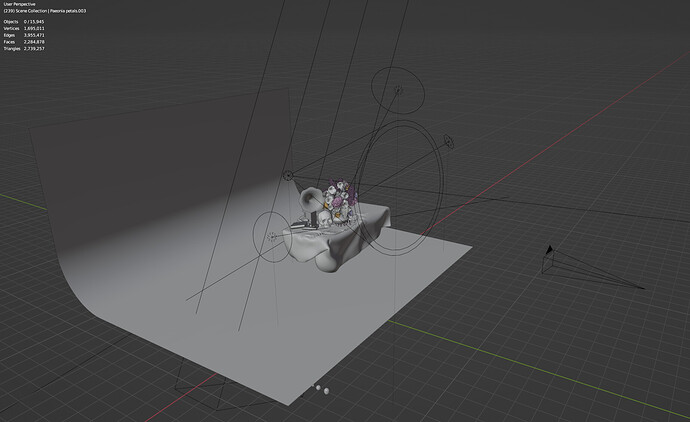 One thing about the composition – the flowers are pretty much in the center, so it leaves me wanting to see something on the right (in the back) of them. The gold/brass record player thing and the smoking pipe on the left have weight so it leaves me wanting just a hair more balance of something on the right side in the back… This is just me being picky

I kept thinking of what to put in that top right area, but couldn’t think of anything that would stand that tall and not look weird. The candle stick was taller but that just looked forced. Some stronger lighting effects from the right were also used at one point but that gave it an unnatural overly-processed look. So yeah, you’re right, but I couldn’t think of what to put there

Wanted the flowers to be the focal point, maybe should have cropped the right side entirely. 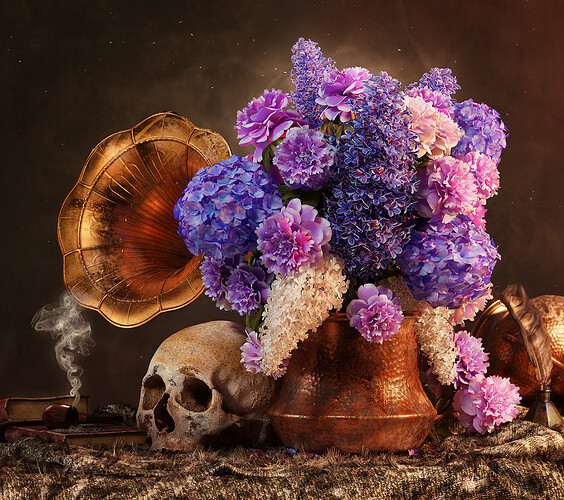 Haha, you’re not getting away with it that easily!

It is a bit better and you’re closer for sure. I almost think you could lose the brass vase(?) since “chopped” items aren’t too desirable on a composition. Maybe the feather or candle could be there but nudged a bit to be more balanced in the overall composition.

Maybe the candle could be next to the skull or even on top of the skull, lit with some wax dripping down, he he… And the feather still on the right but it’s leaning toward the right (instead of left). ? maybe… Just thinking out loud…

The detail is fantastic!