This is my first completed scene in Blender, rendered in cycles, and did some minor postprocessing in GIMP. Goal was to get close to the photo below. 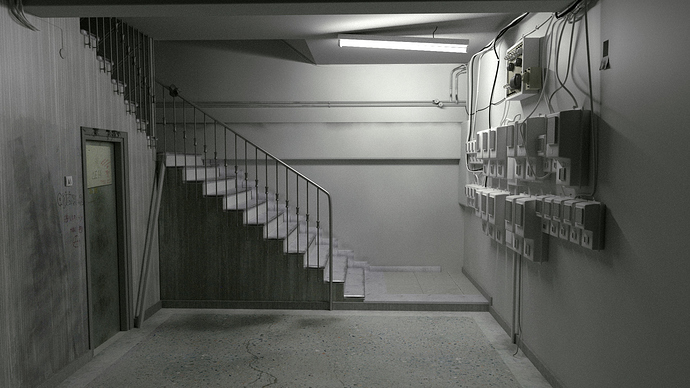 It took an hour to render in 1080p (300 samples) because I wanted to keep the lighting exactly as in the real scene. (If I enable some extra (point) lights the noise drops dramatically). I think the remaining noise adds to the realism.

Not everything is 100% replica of the photo. The idea was to be similar enough so that it looks real. If something was close enough and just required time but not additional knowledge (e.g. realigning a texture) I skipped it, so textures are not exact and the cables don’t have the same paths.

I can still fix and tweak lots of things to make it closer to the real one but I think that I learnt whatever it was to learn from this scene and improving it any more is pointless.

Nice job man. I see you going for the desaturated look. Anyway, I would have put some props right near the stairs, but that’s just me. By the way, nice modelling on the boxes on the right.

I like it, specially because it only have 300 samples, I would like to know how to do that.

Great work, especially for your first post, qwazix! The detail in the scene is very good; I especially like all the utility boxes and various cables and pipes placed among them! That goes a long way in making the scene feel more real. The texturing is also pretty good. If I had any suggestions, maybe it would be to add more grime or leaks in places such as corners, or underneath all those utilities, for instance. However, you could use compositing to accomplish that as well.

I’ll try that thing with the grime, to be frank I didn’t think to do it in post processing. That’ll save some time. Thanks for the tip.

Regarding the samples, I don’t think I did anything special, in fact I consider 300 samples to be too much for this scene. There aren’t many glossy materials and no transparency except for a little bit of glass on the box windows (which by the way are electric power meter boxes).

I also noticed that I rather like the jpeg overcompression effect of the preview, it adds to the feeling.

I don’t know if the original photo attachment is accessible, it shows an error for me if I am logged out, so I’m reattaching it here. 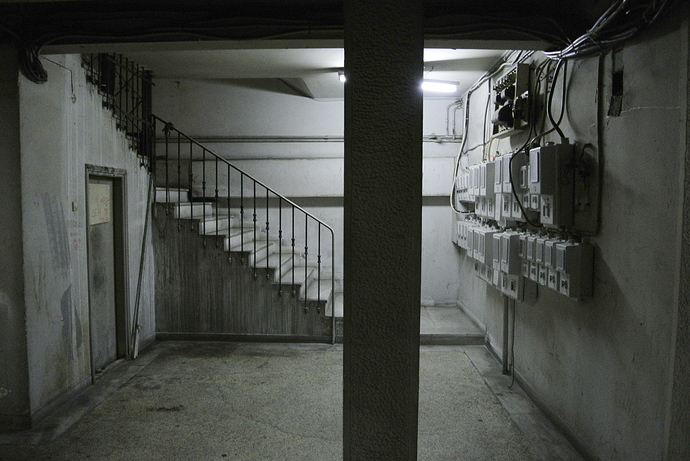