Basic ship modelling: how to get lump-free curves?

Just wondering about how people get fair curvature in surfaces on odd shapes. Usually with ship/boat design software there’s the ability to show the rate of change of curvature of the surface graphically, which is handy for picking out where you’ve introduced lumps.

How is the same work handled in Blender? Kthnx.

Please show us a blend-file and screen-shots taken from that blend, showing what you mean by “lumps” and “odd” shapes.

There are various Blender tutorials that illustrate ship-hull modeling:

A common technique … also illustrated in Blender documentation … is to create a profile curve of the hull at various points, then stitch those curves together to form a three-dimensional surface. Mathematical surfaces, properly constructed, ought not to have “lumps.” And they can, through the use of various node-types in a Bezier curve or surface, describe some “odd” shapes. (But, do ship’s hulls normally have “odd shapes?”)

Please show us a blend-file and screen-shots taken from that blend, showing what you mean by “lumps” and “odd” shapes.

The problem is that if I already knew where the lumps where, I wouldn’t be looking for a tool to enable me to check for lumps.

This may be a problem with different experiences between Blender artists and boatbuilders. If I tell a boatbuilder I want a lofting tool to get my curves fair, he’ll know exactly what I mean straight away. Yes, I have actually drawn plans for real boats, and built them, so I know how boatbuilders think.

Since boat/ship design software is optimised for that use, it contains specific tools to make the job easier. The idea is to give yourself a exaggerated graphic representation of rate of change of surface curvature, so that you can easily pick out areas where the curve is isn’t “fair”, in boatbuilding terms. These are discrepancies that are easy to miss when working on scaled down plans, but likely to become obvious at full scale.

There are various Blender tutorials that illustrate ship-hull modeling:

As well as various tutorials at Blender Cookie.
Ok, cool. I’ll have a look through those.

A common technique … also illustrated in Blender documentation … is to create a profile curve of the hull at various points, then stitch those curves together to form a three-dimensional surface. Mathematical surfaces, properly constructed, ought not to have “lumps.” And they can, through the use of various node-types in a Bezier curve or surface, describe some “odd” shapes. (But, do ship’s hulls normally have “odd shapes?”)
Yes I was thinking I’d probably have to set up Beziers or NURBS on the stations, waterlines, buttocks and diagonals and go from there. It’s likely to be a messy process.

Without wanting to get into an argument over trivia, it’s quite possible for mathematically defined shaped to have “lumps”. And yes, ship hulls can have some very weird shapes in places.

@Eppo: Thanks for the gifs. I can see those tools being useful.

if possible don’t use small drawings as found on the internet
that is probably the worst references drawings that can be use !

Yes, I know that.

I was actually starting with 8,000 px TIFF’s from the Danish Maritime Museum, but they still need lofting.

Use a matcap view to find distortions in the mesh.

If you are trying for an accurate hull form ( fluid dynamics and volumes analysis, etc ) I would not recommend using Blender for this. If it’s just to be a good representation, I would start by 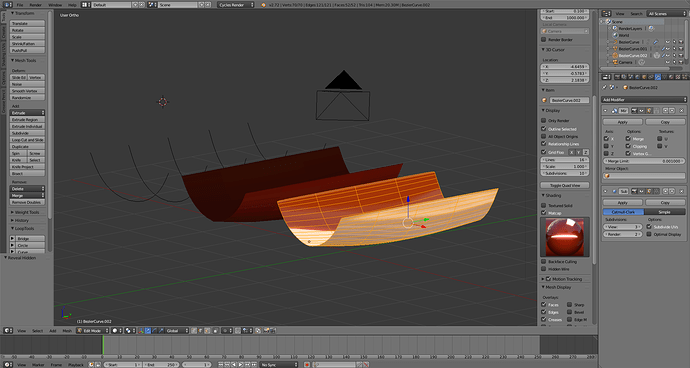 Yup, good representation is what I’m after. I don’t expect Blender to do full hydrostatics, although it’d probably be capable of it with a bit of custom scripting. If I want an accurate hull analysis I’ll do it in Delftship, but for just a good visual off old plans Blender has some advantages.

Thanks for the tips. I’ll mess around with it all.

can you elaborate what can be done with the free version ?

Sure. It’ll draw ship/boats bits (hull, decks, etc) and allow the lines to be faired via several checks. It’ll run the usual hydrostatics (displacement, prismatic, etc) and plot a curve of areas. Won’t do hydrostatic stability curves, but will give basic metacentric height. Also does weight and CG calculations by area/volume for specified material density. Has perspective or ortho views, of course. Can take background images for reconstructing existing hulls. Imports and exports to several file formats, including some used for resistance prediction. Probably a few other things I cant think of offhand this early in the morning, but generally it’ a fairly useful piece of kit for non-professional use.

I’m new to Blender and new to this forum. I’m not new to modelling though, having used other payware packages.

One of my interests is boats. To model the hull I currently use DelftShip and then export and import into my favorite modelling package for adding the superstructure and other details and textures etc.

I’m considering migrating the work I currently do in DelftShip into Blender (therefore becoming an exclusively Blender workflow). However, in order to do this Blender would need to automatically fair curves… therefore I’m trying to find out if it now has a fairing capability? Hence I’m replying to this somewhat old thread…

No, Blender will not autmatically fair curves. In fact, when I asked about this people here didn’t even know what the term meant. You’d do better to stick with Delftship for fairling lines. It’s not something Blender is intended for.