hey this is a personal project of mine. tell me what you guys think, and what i can improve.

This was done with vray-Blender 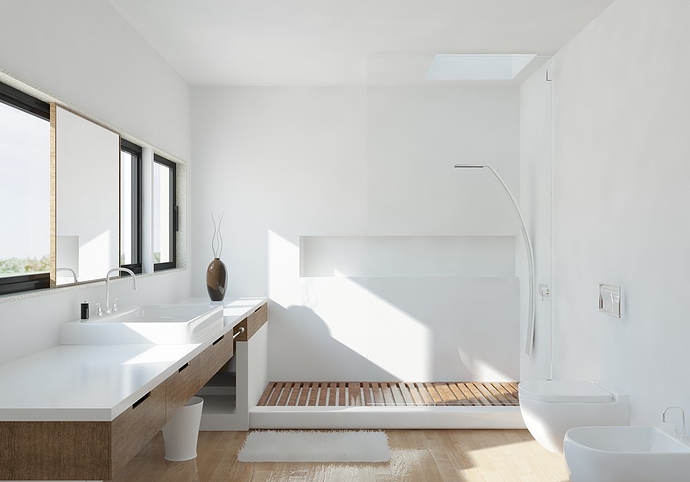 Not too sure on the thickness of the (Bidet?) in the bottom right hand corner of the shot…seems very thin and personally that does not seem like a pleasant experience (Although Bidets aren’t my thing anyway…).

Other than that the image is quite simple, and has complexity where it is necessary, the light is very nice into the scene, although a little generic in position the way it “feeds” the scene is quite good indeed.

yeah you are actualy right. the bidet is relly thin. ill change that. thanks.

any other comments guys?

By the way, do you think i could achieve this kind of lighting using blender internal render?

I’d want some privacy while showering or using the bathroom

So I’d recommend adding blinds or curtains or something to the windows, and possibly making the shower wall glass glossy (assuming that is a shower in the back). But the render itself looks really nice :yes:

Very nice light and I like the design. I personally like towel racks but maybe you want towels to be kept folded on the shelf beside the sink.
@xipita - vray is a very good rendering engine, but Bi has many advantages and you can do good interior lighting with it. At least I try, you can take a look at my living room interior, posted in this forum http://blenderartists.org/forum/showthread.php?236005

Very stylish! :yes:
Well I know, glas is glas, but perhaps the glas in front of the shower should be a bit more visible, also for security reasons.

Het ovnav. your interior is nice but i think the lighting has some issues like very dark corners. and blender internal does that because of AO. it has no GI and i think the light distribution is just wrong. but ill give it a go and post it here soon.

I didn’t say you can make GI with BI, just pointed to results I managed to get with it. In a real work workflow getting the ultimate realistic lighting is not always the main goal, and BI makes for a more simple workflow, the results I got are pleasing to clients. Some way back I used to work in Max without any plugin like vray (it was still not used) and painfully faked all interior lighting with point and spot lights, max had no AO function (maybe now it has, I haven’t checked recently) so when I discovered AO and later environment lighting in Blender I was really wowed by it. Of course GI and unbiased light is something else… if you already have a Vray licence and you found a satisfying workflow with it I see no reason to use BI…

…and yes, the darker corners are a result of the AO settings I use, I like to get more contrast in other areas but maybe can be balanced some other way. It also gets almost buggy in places where you have surfaces too close to each other like in the ceiling recess but I didn’t bother trying to improve that.
Good luck with your test, do post results!

Looks really nice, my small critique is the carpet looks like it is shadeless. Great work none the less.

Very nice and good work. i liked very much.

The irradiance map is quite blotchy. It is particularly noticeable on the right hand wall.

Beautiful render, but as mentioned above the rug looks horrible