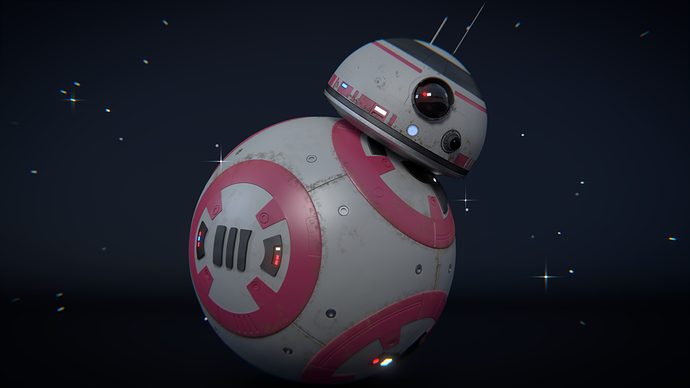 Just finished up work on my model of a KT variant of BB-8.
Pretty happy with how the model turned out and I think I’ll be working on an actual scene with this little droid in the near future but first I’d have to figure out what that scene is.

Big thanks to eezacque who wrote a script/driver setup that made it possible to rig and animate BB-KT’s sphere to where it can roll similar to the real BB-8 Prop.

Also I did do a BB-8 Render 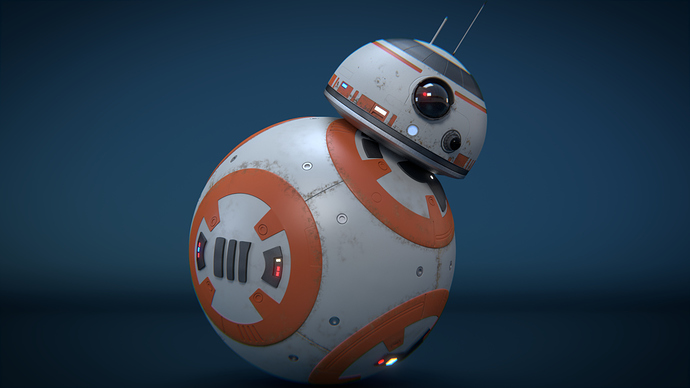 All the coloring comes from separate materials that are merged into one material through multiple texture masks. I chose to go that route in the event I wanted to quickly swap the base colors on the droid. There are 2 dirt/grunk texture masks that are also fine tuned with color ramps so I can slide the ramp to either add more or less dirt as well as whether or not it’s just a fine dusting or smeared on the droid.
ShadowCamero (ShadowCamero) April 25, 2018, 11:42pm #2

I’m thinking of coming back to this character soon and upgrading it by giving it some tools inside the head similar to R2.

is there anything in particular you like or dislike about my model or something I could improve on?
My apologies but I can’t help but feel it’s more of a plug for a similar model as opposed to feedback.

I like level of detail in your model. And this streaks of dirt - is this from some texture, or you paint it ?

I like level of detail in your model. And this streaks of dirt - is this from some texture, or you paint it ?

Well it is and it isn’t.

The way I create the overall look of my materials is through the use of texture masking. So there is a base material that is white. the first texture mask separates the white from the pink/orange. A third texture mask creates a layer of dirt and a fourth adds some faint grease/oil stains.

So essentially each color/dirt material is controlled by a texture mask which is painted onto the mesh, creating the overall material.