HI guys! So, this time, I’ve taken the time to create one of my favorite characters ever from a show I so dearly miss now. Here, you can see my progress on a Beast Boy model of mine, specifically modeled after the portrayal of the character on the Teen Titans show. I thought of making this character as a tribute to how great the show itself was, because it gave a comedic, yet serious, outlook on how teenagers would cope with superhuman abilities/responsibilities. Anyway, I hope you like it! Please, don’t forget to comment and criticize. Also, I know the belt isn’t modeled yet. I’ll get on that as soon as I can. 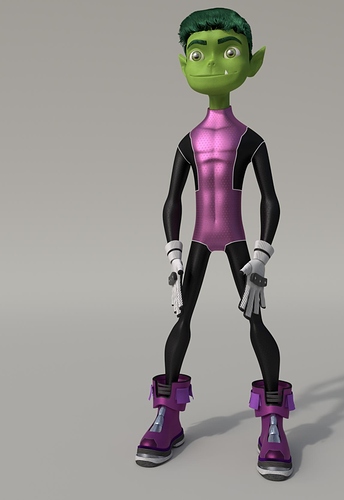 He has a surprisingly formal appearance with the hair being neatly combed.

Having seen pretty much all but one episode of the show, I don’t think he cared that much about professionalism.

Alright, i see what you mean. I should be able to fixed that by playing around a little with the brownian values

The opening of the shoes can be shrunken down in relative to the size of the legs. You might want to create the hair in parts on his scalp in order get the hairstyle.

Along the same lines as the hair being too formal, his hands look rather straight compared to the model sheet, like he’s about to salute (which seems not quite in character, though I’ve seem more like only one of the shows). Also, compared to the sheet, it seems like the neck is maybe a bit long.