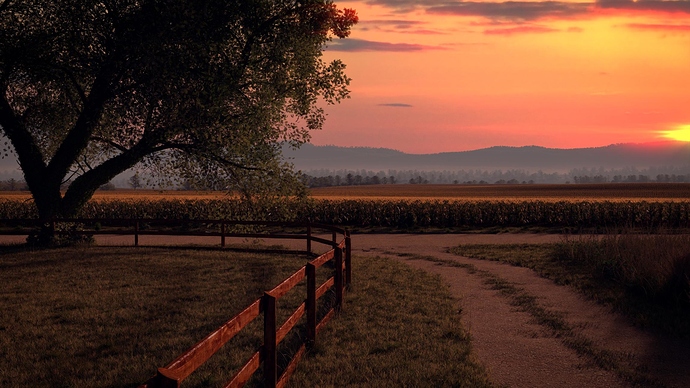 This is my latest. It’s meant to represent a morning scene and is loosely modeled from a picture I found on Flickr.

Please click on the picture until you get the best resolution.

Thanks to Andrew Price for the grass, CG textures for many materials - including the sky - Arbaro for helping me make the trees. I think that Arbaro is a little more flexible than sapling. I wish the corn was my own, but I grabbed a model from TF3DM - thanks to whomever made it. I only slightly modified it.

I’m putting this in finished, but I tinker with my images way after I think they’re done so I expect I’ll post updates.

Love the lighting and depth.

Thanks, cgstrive! Wow!! i just looked at your trailer. AMAZING!

Beautiful! But I would suggest lowering the glossy value on the fence, wood that’s been out in the weather like that usually isn’t very glossy

Hey bossestrenders - I’ll give it a look. I agree that the fence looks a little new (that’s sort of what I had in mind) but I never really tried a more weathered appearance. I think less gloss, saturation and maybe a little grime around the lowest planks.

Just to show some failure: 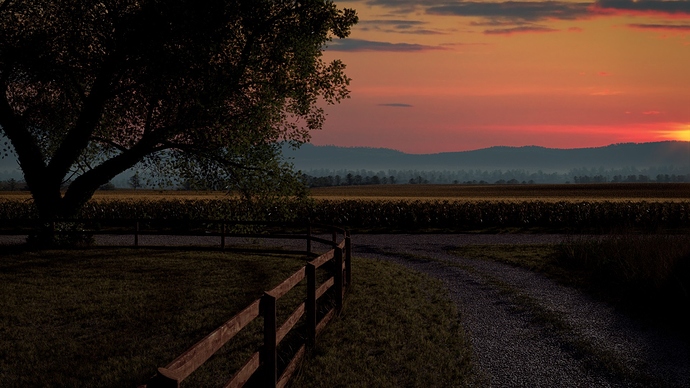 I spent some time trying to ‘improve’ the image and make it look more like what an early morning would really look like. I feel the original - while it may be less realistic - is a better image. Even the slightly shiny fence.

Truly is a beautiful scene with beautiful light. I do like the original just a little bit better, but it was the right move to tweek the fence.

Here’s a kind of timelapse of all the bad images I had to go through to get to this point:

Great result! Love the light and shadows. Also nice use of grass essentials. Just curious, did you model the mountains or are they from a 2d image? Nice work!

Hey daleforbes! Thanks. Much of the landscape was done with the landscape plugin in Blender. The only thing that’s a 2d image is the sky plane. I kept adding more and more landscapes (and flattening all of them - including the field) until it had the right feel. If I were to add animation (wind maybe?) to this, I’d probably render an image for the back area though and mix that with an alpha-mapped foreground. It’d make the render go a lot faster.