I’ve been looking into the bendy bones feature lately when I began building a new armature for a model I downloaded, mainly for clothes animation. After posing it, I was impressed because if it works correctly when applied to the model, I could create a windy drafty effect easily.

The problem, however, is that the segmented bone between the head and tail seems to change when I toggle in and out of edit mode. I read the https://blenderartists.org/forum/showthread.php?413031-Editing-a-bendy-bone thread but it didn’t seem to be any good. I set the in/out x/y stuff in edit mode, and made sure the settings were 0 in pose mode, as per suggestion in that thread, but to no avail.

Below should illustrate my issue. Top is a screencap in edit mode, bottom is pose mode. If you look at the bendy bone to the right of the selected bone, you can see the problem is more obvious. 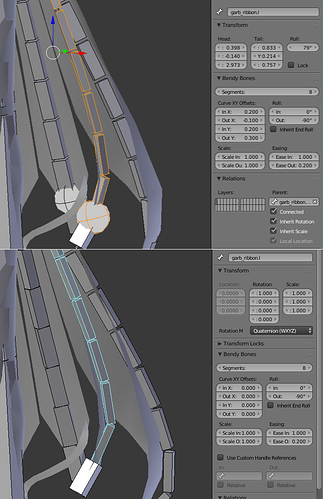 Can you post a blend with the mesh hair cards you are concerned about? Do the bones move if you change them to something other than bendy bones? Is your weight paint correct?

I haven’t applied it to the model yet. I was building the rig when I noticed this when I tabbed out of edit mode. I decided to get help with it now, rather than build the entire rig assuming it would be okay, only to have wasted my time on something buggy.

Without bendy bones, it would work. However, it would be a lot more work to animate. I think my issue is exclusive to bendy bones. I would really not have to give it up.

As for the model itself, I’m not sure if it has a copyright or not. It’s extracted from a videogame and I was hoping to do some nonprofit promotional machinima with it. That being said, I’d rather not put it up.

EDIT: I did a test application of the armature to the model. Bendy bones seem okay, but the curve changes on mirroring. Also, flip names doesn’t seem to be working. Instead of x.R, I get x.R.001 and so on. Here’s my entire naming convention below for left side 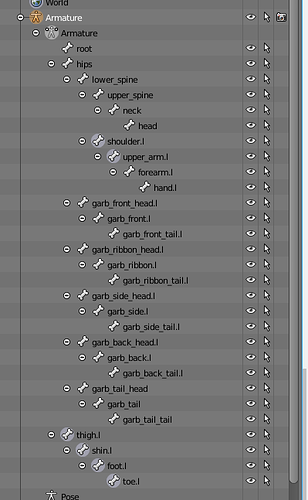 Is there a constraint on that bone ?