I’m using Blender 2.49b; it looks like whenever I add bevel modifier to my object my uv coordinates are going crazy. Rather unfortunate, I guess… Is there a chance to do something about it?

finish your modeling and then UV

UVs should NOT be destroyed. I would hope that this is fixed in the future.

you should work with bevel weigths and only bevel the egdes you want exactly to be beveld.

Could you define “Crazy”?

This is actually something that was never finished (along with a bunch of other things in the bevel code). Right now it does do some preservation of UVs/VCols, but the inset amount for them is constant (easy to fix). However, the whole of the bevel code needs to be ported to the new B-Mesh API in Joe’s branch in SVN before any of this can even be thought about…

Interestingly the biggest problem is how to handle beveling of edges that occur on the boundaries of UV islands. Each edge that is beveled means a new face, and currently that new face has its uvs ‘bridging’ the two islands. There is probably several ways one could go about fixing this, although it would be very helpful to see how other apps deal with this specific problem as well.

Wow, I thought this was a bug in the recent 2.55 Beta version, but to my dismay I just verified that the same thing happens in 2.49. I’ve attached a simple screen shot illustrating the problem (first cube without bevel, second cube with bevel modifier). The huge offset in the UV coordinates doesn’t make sense and other 3D apps handle this sort of thing just fine, also with subsurface modifier, too. That’s the whole point of using these modifiers. You want your model to be as simple as possible in order to:

@Briggs: you said something about an easy fix, could you explain, please? 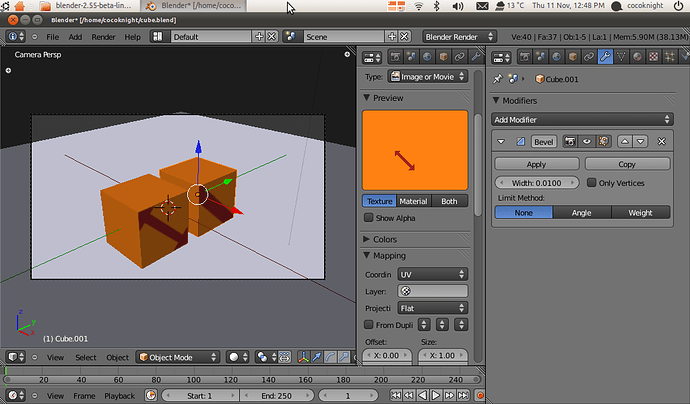