It’s been a while sense I’ve really used blender, even if I never was that good at it to begin with, but I started this project to get “back in” so to speak. The fact that there’s a contest going for characters is just a happy coincidence that will hopefully push me to make more of this then I was going to. 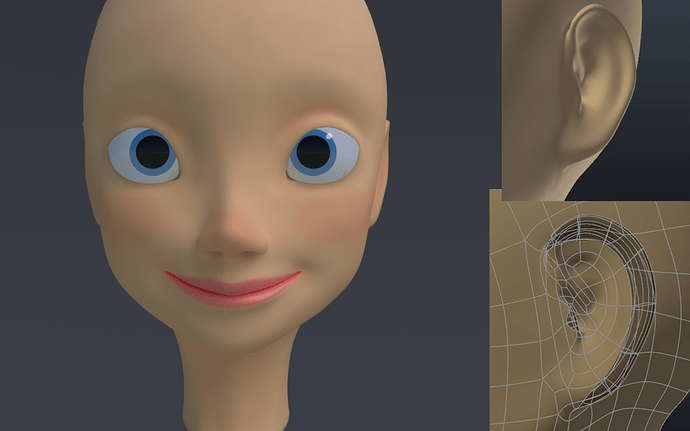 So, a little catch up to where I’m at. I started this off as just another of my fun little study projects. Which I do because I don’t typically trust myself with finishing larger projects. I did just the hand and sleeve, because her dress is amazingly shiny. (and hands are a big theme in Frozen) 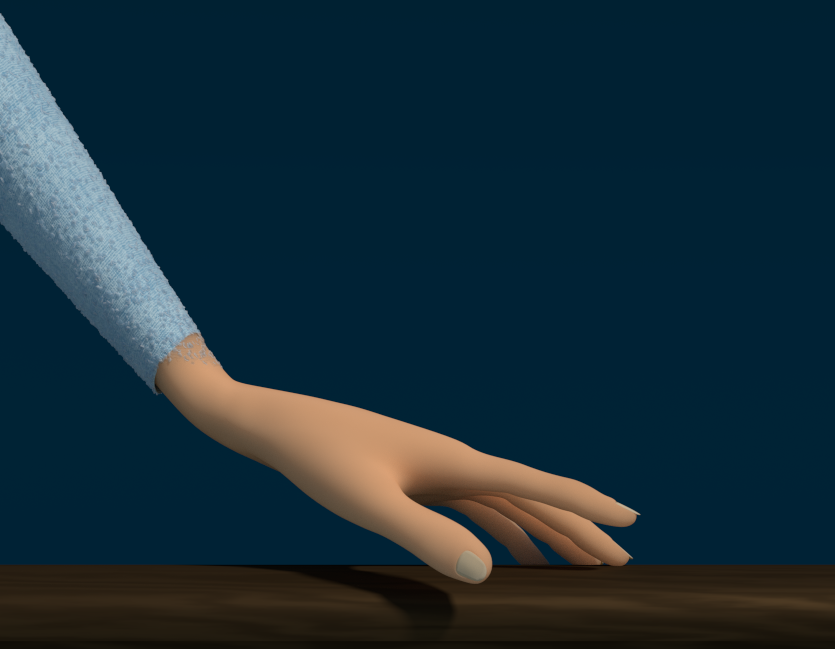 While I was thinking about doing a background for it I made this image. Now to keep that composition it, obviously, needs a full character rather then just the hand/arm I have. (kinda missed the point of a background. You beginning to understand why I don’t trust myself with “large” projects yet?)
And that is how I started with this character, completely backwards I know, but eh, I guess I’m just special. :no: So now I’m going back to the proper starting point of a human character, the face.

So my first question that I will share with all of you is regarding my old nemesis; the eyes.
I’ve noticed that she doesn’t have any Caruncula lacrimalis. There are some shapes that allude to it, but essentially it’s not there as you can see in my reference pictures below. So my problem is, how do I fill that gap?
Just moving the skin back to met the curve of the eyeball doesn’t work, it’s too far back and looks all wrong.
I thought about increasing the size of the eye in general, (again) but my initial test on that extreme of a change didn’t really work.
Do I make the eyeball non-spherical? Would a lattice or something even work to push the eyeball forward there? 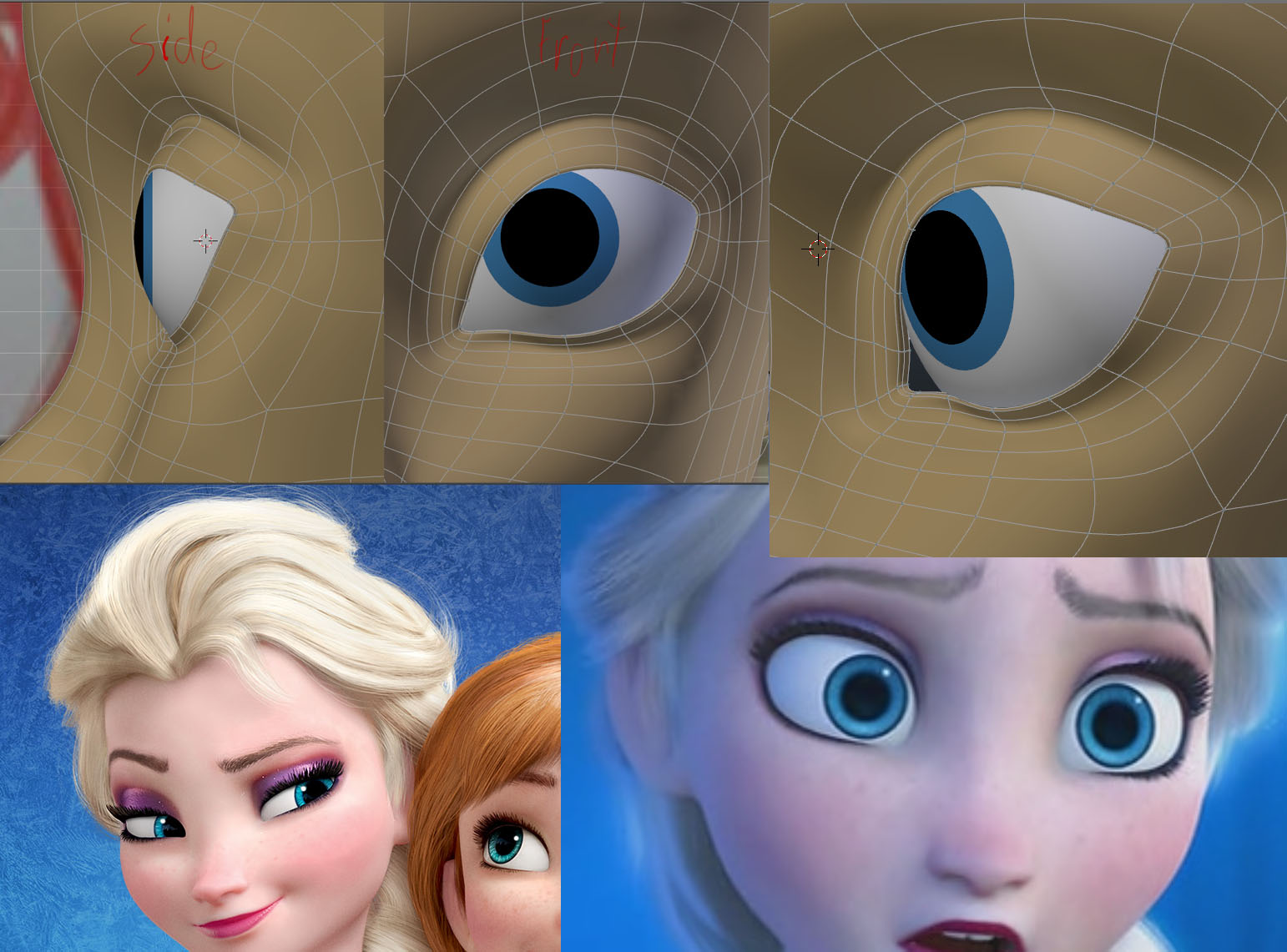 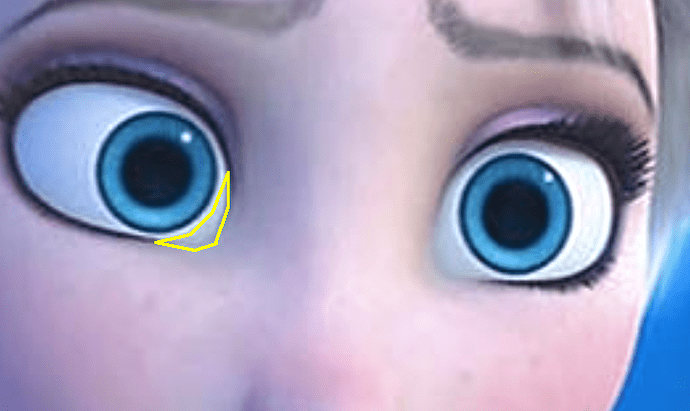 They covered that gap with a light blue membrane that rounds out the eye socket so a spherical eye fits. I wouldn’t worry about hacking the shape of the eyeball. Learn from the masters at Disney: cheat.

The bits you show to us look like a good start

I didn’t think of that option Orinoco, thanks.
but that gives me a follow up question, what wizardry is this? :eyebrowlift2:

I’m really wishing I could get better pictures of this. But the DVD/BR doesn’t come out till March 18th. Which is the day after the competition ends, go figure.
With the best quality I found and still being sure that this is the animation model, here’s an another collage. (except that lower left one which is a poster image and has probably been touched up after render, also, Anna snuck in there.)

From what I can see, I would completely agree with a membrane, as long as she’s looking up. However, when her irises/pupils get down in there, it’s like it goes away. 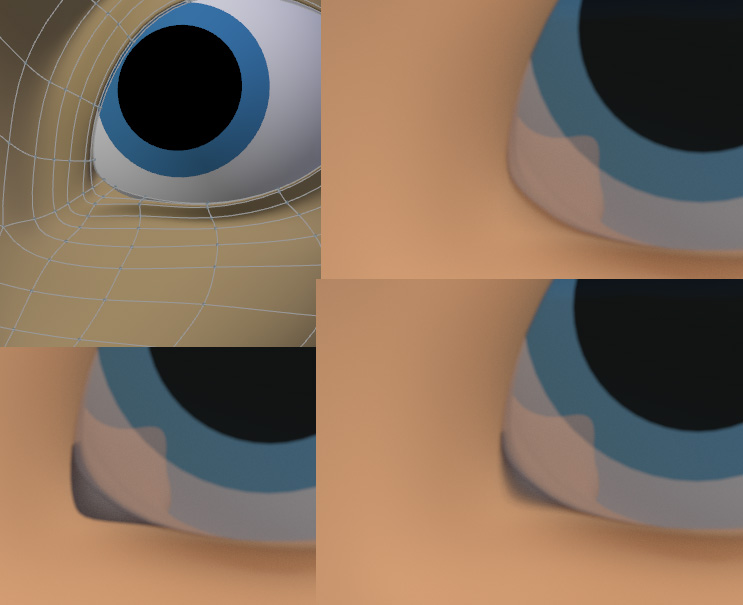 Regardless, here’s my testing regarding this. First I just took existing geometry to fill the gap, abit, in a way I hadn’t considered before, which I was surprised looked rather nice just by it’s self (Upper right corner)
Next, feeling that simple was awesome, slapped a cheap translucent material on the inner poly’s. (lower left) but with shadows that gets quite dark, maybe if I put a fake eye… tiddially bit, under it to catch the light?
And finally I put a gradient fade between the two. (lower right) I feel that this is where the magic is probably at, although it needs some tweaking still to make it not look like the skin gets darker. but that can probably wait till texturing as a whole.

Thanks Minoribus, they are really the only bit’s there to show at the moment.

It looks like Disney’s eyes have bulging corneas over the iris (physically accurate) so perhaps the cornea is interacting with that membrane somehow. Pushing it out of the way? Maybe its transparency is a function of the distance to the closest mesh, like Ambient Occlusion? I really have no clue what they did there, but I can’t imagine it’s counter-animation.

You use a lot of reference which will make your modeling great. If you are good with rendering too, this will be really amazing.

Orinoco: Yeah, I’ll definitely be checking out how the corneas interact there, for now the eye’s are just placeholder models though. Also I don’t want to get too hung up on one detail when so much is missing still so I’ll be coming back to that later.

Thanks AlinB, don’t get your hopes to high though. Modeling is definitely my most comfortable area, and I have learned the hard way that references are a very good thing and that you can’t really have too many.

Just a quick update. I’m only a hobbyist, so I have to find time between work and life, which isn’t always that much, combined with the fact that I’m quite slow, especially when not under pressure. 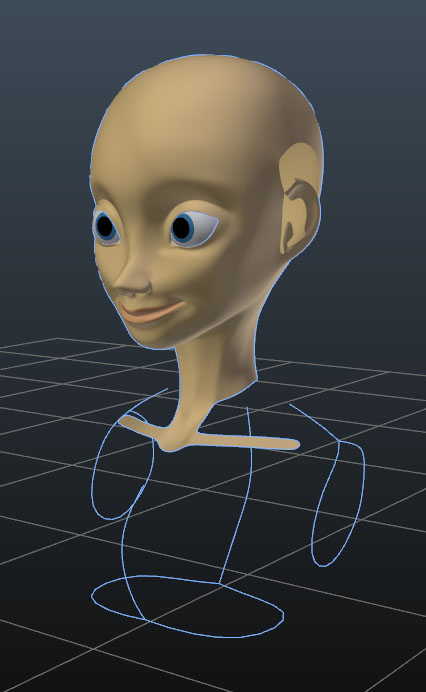 Obviously ears are next. shouldn’t be too difficult other then the fact that I’ve never really done those before.
any comments or crits are welcome.

Edit: forum question, I linked to the current image (insert image > URL of this posts image) in the opening post but it didn’t change the thread thumbnail? do I have to do something special to make that change, or did I just link it wrong?

Got the ears done, first time doing these (that I can remember at least) so any comments are welcome as I’m sure they can be improved upon.
I then got distracted a bit, and put on some vertex colors and rendered to see what it looks like so far.

Ah, she’s a bit cross-eyed. I’ve found angling the eye spheres outward from 5 to 7 degrees usually fixes that problem. You may have a more detailed ear than the original Elsa had.

Hey…cute character and colors… Looking forward seeing this one done.

How are you going with this model?? I’m really interested to see how she turns out!

Pretty interesting so far…how goes it?

I’m also wondering how it’s going at this point…