usually I do not post that much feature request as I’m quite happy with the Blender and the BGE.
But here is an idea that could move the development pipeline for the BGE much further. I want to use this thread to present the proposal and collect your thoughs, concerns and ideas.

Maybe this is possible as Add-On. It looks like I have to join the development path :spin:.

If you do not understand what I’m writing here, just ignore it ;).
Otherwise what do you think?

Property Gui for Instance Objects (without the X): 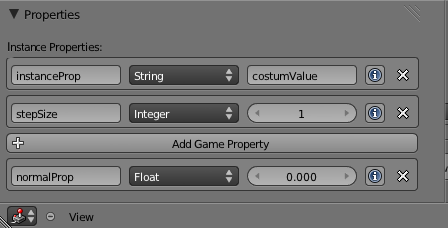 hi Monster, this thread might be of interest to you and also relates to your proposal

Thanks for the links.

), but I do not expect it soon.
I’m not sure how that gets integrated into the BGE.

I’m pretty sure the SCA-logic will survive. Otherwise all the resources (tutorials, logic, Python code) we have now would be useless. That can’t be the goal of the development.

I think it makes sense to still improve it

Hey Monster - can you also put out there that they should make an ‘x-ray’ feature that works via BGE?
Most modern day games don’t even go without it!
Specially if you want to make an up to date FPS where your gone doesn’t go through nearby objects

the nice feature of component approach ( and even could be experimented with basic code here https://github.com/caseman/grease ) is that code is separated from data.

that way - it is possible to write nodes from blocks with any attributes and then insert logic. That will pretty well integrate with current system and also can serve a base for your proposal - just to have a layer to keep attributes of groups and members of groups to be somehow connected.

But that has nothing to do with the logic changes.

Finally it will be up to me to implement that (except anyone else is interested ;)). I want to see if you can see any problems with the proposed solution. So any obstactles in the design can be removed early.

Oups wrong word. it should be: glossary

When reading again, I see it shouldn’t be possible to change the type of an instance property. This should be possible at group properties and object properties only.

Also, it appears that you think that instanced object properties are not accesible?
They are, just not via debug properties…

I’m right now trying to understand this because I have to handle it in flexicomp so apologies if I miss Your point… But I think it would be cleaner to handle it by:

This is so far the same with groups or ordinary objects. But if You want to make a ‘automagic’ group add a callback function by module that sets up the object proper when they are created. The module namespace is a perfect global namespace for the group and all it’s instances. From there we can build any data structure we need.

Callbacks is useful for allot of other stuff to so it’s a general and powerful solution. There should be a callback on end object to - both per object and globally.

I think my proposal is not that clean as I thought.

The whole point is with that method you do not need python. It is a way to enable a user of a group instance to push paramters into the group instance (remember you can’t select the instantiated objects!).

Because you can’t select the instance objects you can’t change the logic nor the properties. This is good in one way: It hides the implementation to the user. But bad in another: the user can’t influence the logic as there is no access.

What the user could do is to set up object properties at the empty. The logic at the group instances can read that properties (via Python). That is possible already.

The proposal is to share properties between the empty and the object instances.

OK. Think it got clearer. We got two possible levels of instantiating.

In blender, when creating an instance of a group. I think group properties that set to a default in the original group in a library .blend but can be changed for the individual instances of the group is sane.

In BGE, when creating an instance with scene.addObject() a callback is the logical chose. Because BGE can’t know what’s sane to do. A tree might want to hook up with a LOD and only show different of the individual object when told to - A car want to add the body, the wheels and set up the vehicle constraints.

Hmmm… The hiding of internal objects make sens in blender but not in the BGE… Damn, still don’t know how this really works. Got to experiment a little.

I wouldn’t allow group or instance properties on addobject. It makes no logical sense as there is no group and no instance.

The instanciation is reall simple:

the group does not need to be in the same scene. It should be present in the file as data block or as link to another file. This makes it perfect to act as library. Multiple blend files (e.g. Levels). can share the same groups (libraries).

when running the BGE you get the same objects too, with a difference:

Made a quick hack for that so you can see this useful feature in action: