Here it is!
My remake of Seicross for the NES!

Game Description:
You play as some blue guy on a futuristic bike (as opposed to the AI that are stuck with their lame Scooters) with lasers that can be shot out the front, you score points by either shooting up the competition, or by running them into obstacles on the track. You have an energy meter that rapidly decreases, which if it reaches zero, your bike explodes. You can pick up ‘energy things’ on the track that refill the meter. This game (unlike the original) goes on forever, so you’ll be needing to pick them up to get as far as possible, given you only have 3 lives 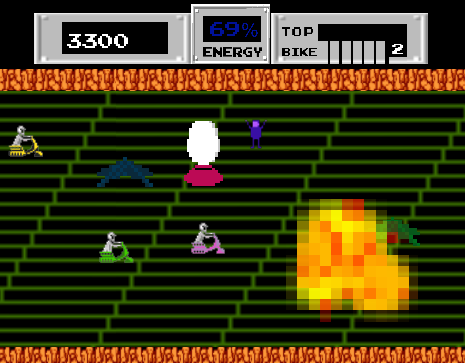 NOTE: This screenshot is a bit misleading… it’s probably because the player is missing.
It’s incredibly hard to take a screenshot with the snipping tool (PrtSc never worked for me)

NOTE 2: The game is best played in version 2.71 and with MipMaps turned ON.
Without MipMaps, the lines on the road become uneven. It’s awful

Thanks for playing, and if you have any comments or criticism, don’t be afraid to reply!

Awesome!
I couldn’t believe that it was all (mostly) done with logic bricks. From simple systems greater complexity emerges.

The good:
Nice graphics, it seems like they are the same as the original game, but still they are pretty good place holders until you make your own artwork. I’m a great believer in place holder art.
Nice gameplay, as I said, pretty complex even though it’s made from simple parts.
Quite addictive, it’s hard, but didn’t make me want to quite instantly.
Good sounds and music. Games with sound always get higher marks from me.

The not so good:
Collision detection was horrible, perhaps this is part of the original game design, to make things more difficult? Anyway, the result is often frustrating as you have to navigate tight gaps with just guesswork as the images don’t match the collision box.
I’d like to reach a save point or if not, perhaps introduce an element of randomness in to the level generation. That’s where more python could be useful.
It gets painful to start over and over again at the beginning, but that’s more of a problem of games from that era. When i was a kid I had the attention span of a gold fish so I didn’t mind playing the same section of game over and over again… now, not so much.
I guess we’re spoiled these days.

Over all a really nice game, very well made.
Good luck in the competition!

I do agree collision detection is dreadful, I used a Force Field script that forms a ball around the drivers. Depending on where you crash into them, either you or them will be knocked away. Easiest way is to come up from the bottom and whack into them.

The obstacles are pretty bad too, the way the original was made is the bikes are constrained to the green lines. I didn’t do that, and so everything is a free-for-all in there. Banging your head on an obstacle wouldn’t make much sense, seeing as how the bikes are standing up

nice game.
after ckicking printscrean, open mspaint and do ctrl+v

Though lacking the polish some others had, this for me was by far the most fun.

Starting to regret not having an entry of my own. Perhaps next time…