Have yet to come up with a title

You play as some guy, infiltrating some camp somewhere in the north, trying to stop whoever from launching a nuclear missile.

^ Player is compromised - guards (who are unarmed, for some reason) chase after the player

Not much to show at the moment, the player is still untextured and the map is more or less empty.

What I have yet to do:
-Think up a title
-Texture the player & enemies (which out of everything, will most likely be the most difficult)
-Finish the map
-Death state (Player in fetal position while being stomped on by guards)
-Sound (Music and silly voice overs)
-Menus 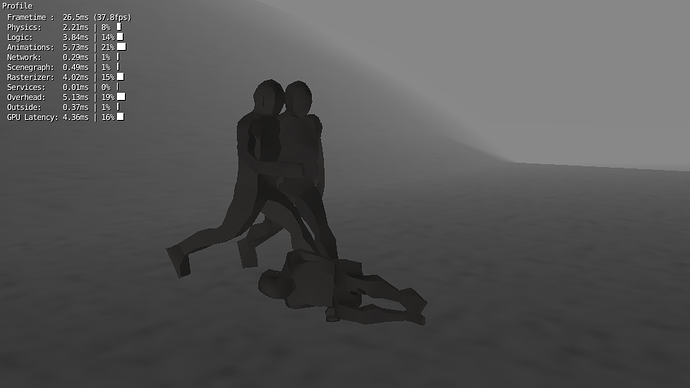 Character curled up in fetal position after being compromised
(Regarding the framerate - Please not that 1#: My laptop is very low-end and 2#: Had a couple things opened (Firefox, music, and the like) so the ~30 frames per second isn’t accurate)
HappyPixelGames (HappyPixelGames) April 25, 2018, 11:57pm #2

Sounds cool! can’t wait to see ore of it!

This looks likes its coming together nicely. Will the player and guard models have some sort of visual difference?

Yep! Though I’ve grown fond of their grey appearance - the plan is to distinguish the player from the enemies, give the guards some generic body armour, and maybe some snowy camo. I’ve absolutely no idea make for the player character, hopefully I can get something done in the morning.

The flat grey figures are sort of haunting.
It would be an interesting art direction, to make the scenery and everything else ‘realistic’ while still keeping the flat grey, faceless people.

Yeah I agree with nines, maybe you could just add slight textures and somehow keep the simple characters.

Hats! Guards wear army caps, or helmets, or something. Prisoners wear beanies. The player has a different-colored beanie.

I know its just a pic, but somehow im expecting to them to start kicking the crap outta him while hes laying there in the fetal position

I know its just a pic, but somehow im expecting to them to start kicking the crap outta him while hes laying there in the fetal position

Unfortunately all they do now is continue their running animation while pushing your curled-up self around… hesitant about adding the stomping, not sure I’ll be able to pull it off. Haven’t done much character animating in Blender, I’m still relatively new to it - especially to realistic human motions.
Gonna take a shot at it, thanks!

EDIT: Well, looks like it’s gonna be a̶ ̶b̶i̶t̶ a lot harder than expected.
Each enemy is a separate mesh & armature; for some reason when trying to add a keyframe the meshes freak out and it won’t let me insert anything.

UPDATE #2:
-Being the terrain is bumpy, the enemy Navigation Meshes are all screwed up, especially the off road areas. This has forced me to enclose areas of the map behind fences… very unhappy with the changes, there isn’t as much freedom as there was before.
-Still no textures on characters - willing to bet I leave it to the last minute and run out of time. Guess my excuse could be it was a design choice, keeping the characters grey.
-Few misc models thrown it to add to the environment

EDIT: Well, looks like it’s gonna be a̶ ̶b̶i̶t̶ a lot harder than expected.
Each enemy is a separate mesh & armature; for some reason when trying to add a keyframe the meshes freak out and it won’t let me insert anything.

I found out what the problem was (thanks to a thread from a year ago created by Cam.Dudes and answered by R.Marklew https://blenderartists.org/forum/showthread.php?292570-Failed-to-Keyframe)

UPDATE #3:
-Started manually created parts of the Nav Mesh, now enemies no longer run into the fences when trying to go through the openings.
-Keyframe issuse resolved - and all AI characters share the same armatures (despite all being Alt+D duplicates (didn’t think it’d work)) so it should be done in no time at all

UPDATE #3.5:
-Stomping when downed is finally implemented (SUCCESS!) but it looks terrible.
Gonna have to re-do the animation… no big deal!

Great news! What I like to do for enemies is having one on a hidden layer and spawning him in the game with an empty. This way you can easily have a lot of similar enemies in your game, and for changes you only need to change one.

The reason I’m doing it this way was because if you alert one enemy, it’s send a message to all the other enemies in the scene. Not sure it would work if I spawned the enemies instead. Probaby via python…?

All I have to change when using this method are the bricks. Not very efficient, but it’s too late to turn back

No sending a message will also work with spawning them in. I know it, because I did it million times before.

Ah, guess you’re right - just tried it out for myself…

I like the creepy grey men. Keep them like that I say. A minimalist design philosophy can work out well in a game jam.

Filmed a quick video to fill everybody in:

I would have used Bandicam as I normally do - but the lag was over 9000!!! (whereas the framerate was -9000) so I decided filming the screen would suffice!

Not much to see other than the animations and enemy AI - I’ve been neglecting the environment for the past couple days, which is now what I’m worried about the most. Should be able to get it done… if not, it’s still playable. Short, but playable.

UPDATE #4:
So… the game is finished. Did a whole bunch of work on it today:

-FINALLY FOUND A NAME! Pretty uninspiring, but better than remaining untitled.
-Made some music for both the stealth and compromised state
-Finished the map
-Added crude menus
-Even cruder voice-overs, will probably be left out of the final product
-Game winning/losing condition.

Still have lots of time to add to and improve it.
Will most likely be doing that over the next couple days!