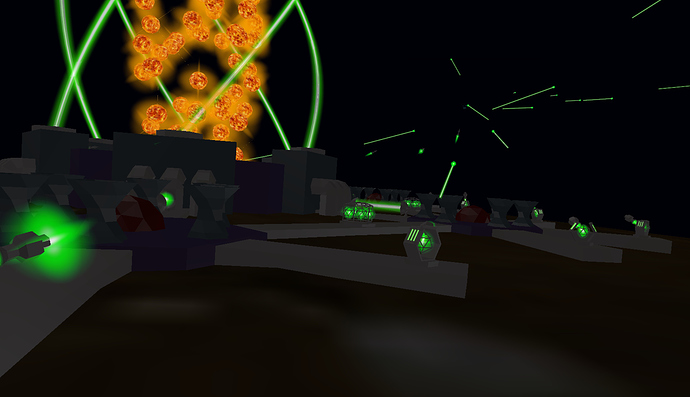 It takes a little practice to master the controls. It is easier to attack the defenses at a higher altitude, but it is harder to destroy oncoming missiles.

You only need to lightly tap A or D in gunning view to aim from right to left. for more precision shots, move the mouse right and left.

A few things: this game was made with 100% logic - 0% python. (I’ve finally done it!) Gwenn designed all of the cool graphics for the intro scene using Gimp- I’d never used gimp, so I couldn’t help with that part. I made all the game mechanics. Gwenn had never used the BGE before - that was a minor setback. This was also my first BGE project ever with sound, so that part was a new experience for me.

By the way, P paused the game when your playing the level. Although the only button that appears is “Quit” you can press P again to resume the game. Also, don’t press “Q” - just don’t. -seriously don’t.

I know the game works in version 2.75. I tested it in 2.76 and the collisions from lava and the basic bullets didn’t register with SUZANNE.

Ok the game is not working for me in 2.75. I started, and then at the beginning of the level the help text comes, and I press play and all that happens is that the mouse cursor moves to the center of the screen and nothing happens anymore

What operating system are you using? I am running windows 7 and Blender 2.75 Gwenn was running Ubuntu and Blender 2.73. Both of us had the game working- or we wouldn’t have been able to develop it

I figured out what was wrong! Apparently the motion blur is more trouble that it is worth! I have removed One logic brick and the game should now work happily!

I can verify that it is indeed now working