So, this was mostly cobbled together over the past two days, and alas even this is late. But in the spirit of the competition, I’ll post it up anyway for people’s consideration.

Guide a leaf through the open air. Controls are the arrow keys, Enter to start, and Esc to exit. 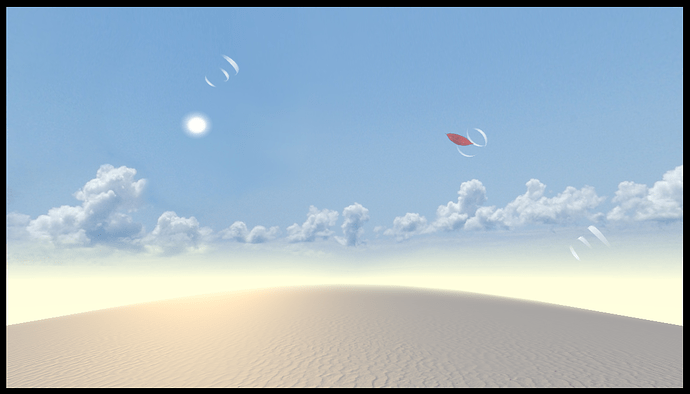 Wow how did you manage to get such HD sky Textures?

The site where I got them from had three sky shots taken from the same camera, so I stitched them together.

Nice , cuz iam also searching really hard on how to get HD skydomes for my game.
Anyway man it looks good keep it up man !!!

Infact the Lighting reminds me of UE4’s lighting system except this is on the BGE.

Happy I managed to get that effect, hah! Feel free to snatch the skybox texture if it’s useful to you.

Yeah thanks i will download it and see how it will fit in my game.
But nice job man it really looks Great !!!

Looks great and nice sounds, I couldn’t survive long though.
Is there a finish or aim?
Anyway,a s an interactive art piece it’s great already.

There is indeed an end, about a minute or two into the game.

There is indeed an end, about a minute or two into the game.

Hahaha I didnt manage to survive that long.

Do you want your game to be included in the voting/all-games pack?

Hmm, I’ve been in two minds about asking about it. I’m curious to see how it would turn out in a voting, but I’d rather it be considered a non-competing entry since it was late to finish. It teaches me to be a bit more dutiful with my time-management, even if I’m in a rush.

I just got around to actually playing this for myself, I love it!
Simple, fun, and relaxing. Well done!