An RTS game where you command ants while building burrows and seeking food.
Can you find all the Easter eggs? 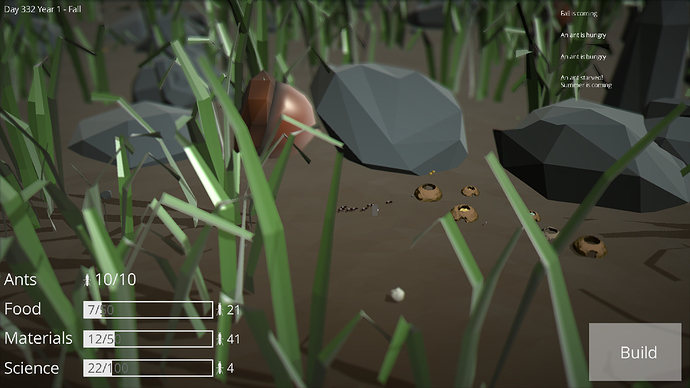 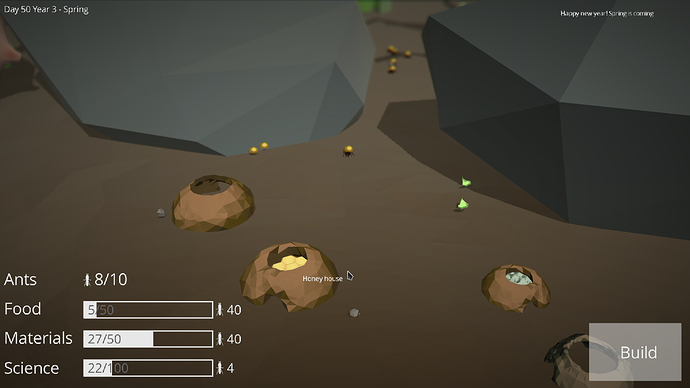 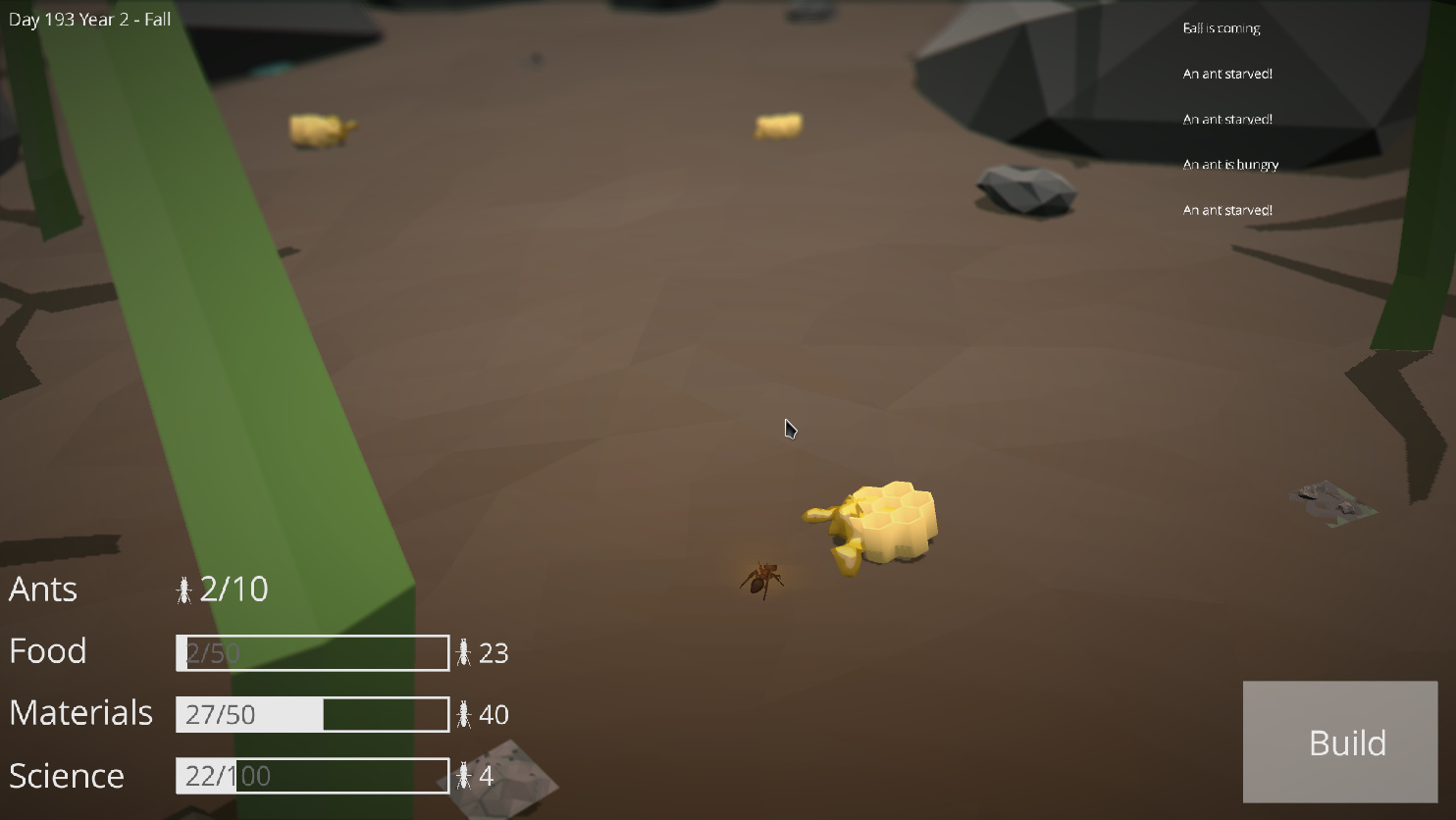 Apologies for the late release…
Created over the course of 10 days, though not everyone worked every day.

Please do report below on any bugs you encounter; we’ll try and fix them before the all games pack is released.

Thanks to SmokingMirror for organizing this amazing contest so well, and props to everyone else who’s entered (lots of really good looking entries out there)
We hope you enjoy playing as much as we enjoyed making

Wow, a really great game!
I’ll leave a review until after the all games pack comes out, though there’s lots I’d like to talk about.
I didn’t find any bugs (except the ants!) but I had rather a lot of trouble with the camera. The pan effect doesn’t work at all in the stand alone player, so you can’t move the camera. In the embedded mode the camera pan works but I often end up mousing over the bottom right corner of my screen, which in windows brings up the desktop and minimizes everything.

I think where it says:

in the camera script, you need to put:

or similar, with the same for the other variables.

The camera momentum is a bit difficult too, since it takes too much to get up to speed and doesn’t stop right away either making the camera overshoot where you want to pan to.

Since you guys did go over time a little, I’ll have to mark it as [late] in the all games pack. I think teams often seem to go over or run out of time, it’s not easy to co-ordinate more than one developer unless you’re all physically in the same room.
But thanks for not giving up, and don’t worry, yours isn’t the only late entry.

Report bugs?! Really!? There’s bugs EVERYWHERE!! …fortunately, it seems I can control them

Amazing game! Stunning graphics and good gameplay. It is already a lot fun to play. Its challenging to keep the the ants alive if their amount increases. My deep respect for what you have achivied.

Found a little bug: if you build something than the ants will stop what they are doing and go to where you placed the new building. Another thing that may need a bit optimization is that the ants can be lost and it is difficult to find them again.

Stick together and make a whole game out of it, i think this may has the potential to be sold on steam.

Congratulations. This will be the winner for sure. But in my opinion you need not to stress the deadline. A bit more bravery for not so much perfectionism may have been better. Not so much polish and a few more bugs would have not harmed you. So there is maybe a bit of a bitter aftertaste.

Did anyone get to the end yet? If not, I’ll just say (to avoid spoilers) that it is absolutely worth it. Keep trying until you get that science meter maxed!

You made me curious, so i did. Holy shit.

Hey! thanks for all the good feedback guys, we really enjoyed making this, and i’m pretty sure we’ ll continue long after this comp to make it an even better game. (I will at least. /me glances at team out of corner of eyes)

i really wanted to play this one but it wont work for me.

i really wanted to play this one but it wont work for me.

What did you try and what happened?
Are you using 2.77?

What happens when you start the game engine in launcher.blend?

The controls drove me crazy. Sdfgeoff’s game was so nice after this. However, I did spend like 30 minutes easy playing this. Bravo!